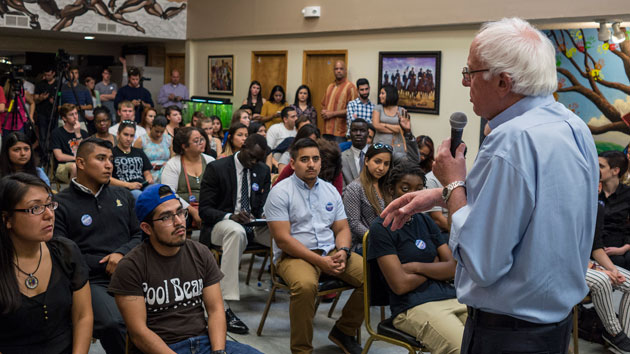 Rachel Maddow posed an interesting question to Sen. Bernie Sanders during their interview on Wednesday: Would he like to see the Republican Party just disappear? Sanders’ answer was also an interesting one. He didn’t take the bait; instead, he offered an alternative theory—the GOP would disappear if corporate media simply told the truth about the party’s agenda.

Sanders didn’t mean that as hyperbole. By his estimate, the Republican Party would drop to single-digit support if it weren’t for negligence by the press:

I think if we had a media in this country that was really prepared to look at what the Republicans actually stood for rather than quoting every absurd remark of Donald Trump, talking about Republican Party, talking about hundreds of billions of dollars in tax breaks for the top two tenths of 1 percent, cuts to Social Security and Medicare, Medicaid, a party which with few exceptions doesn’t even acknowledge the reality of climate change, let alone do anything about it, a party which is not prepared to stand with women in the fight for pay equity, a party that is not prepared to do anything about a broken criminal justice system or a corrupt campaign finance system, I think, to be honest with you—and I just don’t, you know, say this rhetorically, this is a fringe party. It is a fringe party. Maybe they get 5, 10 percent of the vote.

“The Republican Party today now is a joke,” he continued, “maintained by a media which really does not force them to discuss their issues.”

Sanders was returning to one of his driving issues over the years—a fervent belief that corporate-owned media was steering democracy off a cliff. In 1979, he wrote an essay arguing that TV networks were “using the well-tested Hitlerian principle that people should be treated as morons and bombarded over and over again with the same simple phrases and ideas” to prevent them from thinking critically about the world around them. He hit those same themes (albeit more diplomatically) in his book, Outsider in the House, arguing that TV news coverage was dumbing down America by inundating viewers with superficial coverage of O.J. Simpson instead of “corporate disinvestment in the United States.” Not surprisingly, when Maddow asked Sanders in an interview last fall what his dream job might be, he quickly blurted out, “president of CNN.”

A corporate media that obsesses over the issues Sanders obsesses over would certainly have some impact on the political landscape. But Sanders’ dismissal of the Republican base seems to miss a far more obvious takeaway. People vote for Republicans not because they’ve been brainwashed, but because they actually like what Republicans like Trump are proposing.