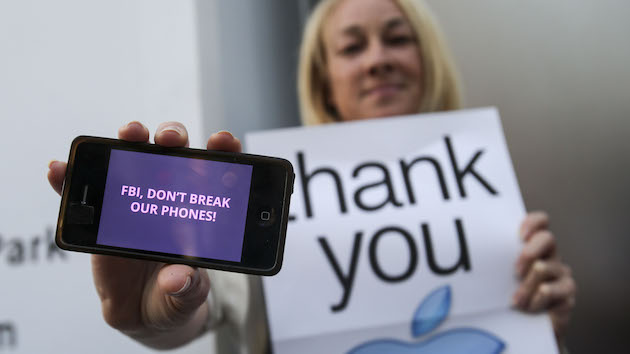 Last week, after Apple challenged a court order demanding that it help the FBI unlock an iPhone belonging to one of the San Bernardino shooters, major technology companies closed ranks and pledged their support to Apple. Now they and other groups have made their support official with an avalanche of court filings backing up Apple’s case against the FBI.

The filings are known as amicus curiae, or “friend of the court,” briefs, and provide supporting arguments and information that judges can consider. Apple’s allies—which include fellow tech giants Amazon, Facebook, and Google; tech industry lobbying groups; groups of lawyers and tech experts; privacy and civil liberties organizations; human rights groups; and even AT&T, which has a long history of close cooperation with national security officials—filed 15 amicus briefs to support the iPhone maker’s case. There were also three other letters to the judge, from Black Lives Matter protesters, a United Nations freedom-of-expression official, and the husband of one of the San Bernardino shooting victims.

You can read all of the court filings and letters here, but below is a roundup of some of the best excerpts from the bunch, and the points they’re making.

The government has no case:

“The government has gone to great lengths to sidestep due process in its effort to avoid judicial scrutiny of the merits of its case,” wrote a group of 32 law professors. “And for good reason: its case lacks merit.”

The government is overreaching:

The government’s case rests on the All Writs Act of 1789, a law that allows the government to issue orders to assist in investigations. But Apple and supporters say the FBI is trying to use the law in ways never envisioned by its writers or authorized under any other law. The group of professors wrote:

No court has ever looked to the All Writs Act to require a private corporation to develop new, costly technology that creates serious financial burdens, radically disrupts its business plan and disrupts its consumers’ long-held privacy and security expectations.

The government seeks to compel an innocent third party into becoming an agent of the state, to conscript a private entity into a criminal investigation, and to require it to develop information for the government that is neither in its possession nor control. This is a tactic foreign to free democracies…The government’s theory threatens a radical transformation of the relationship between the government and the governed.

Some of the obstacles the government is facing are of its own making:

The Communications Access for Law Enforcement Act, passed in 1994, said that phone carriers must make their phone lines tappable—but exempted “information services” companies like Apple from having to do the same. That law has since been reviewed and updated but, as a group of tech industry associations wrote in its brief, not even 9/11 caused the government to rewrite its wiretapping laws to grant itself the kind of power it’s asking for in the FBI case:

In the 22 years following the enactment of CALEA, Congress has declined to abandon any of these restrictions, despite the country having faced a devastating terrorist attack, two wars, and the FBI’s stated concerns to Congress about “going dark”—losing access to investigative information as a result of encryption. The Court should not do here what Congress has declined to do.

Others, including the Electronic Privacy Information Center and eight other consumer privacy groups, also pointed out that law enforcement agencies had encouraged cell phone makers to boost security as a deterrent to theft and other crimes:

Law enforcement groups lamented that “The cellphone industry has for the most part been in denial. For whatever reasons, it has been slow to move.” In response to the requests of law enforcement agencies, device manufacturers have since developed security features that protect sensitive data and deter theft. These new security features are precisely the type of software controls that would be put at risk by the Court’s order.

The court order could destroy digital security for everyone:

If Apple is forced to write one piece of software for the FBI, the Center for Democracy and Technology argued, no one could know which future software was or wasn’t written at the behest of the government:

The relationship between technology providers and users will be forever altered. Users will never know whether the companies whose products they use have been conscripted by the government to break the essential privacy and security features that are supposed to protect them…How can people trust that the security features protecting the technologies they rely on for work, education, friendship, and romance will actually keep them secure if the government can force the same company who designs the product to break it?

That includes automatic security updates, which a group of iPhone forensic experts said are critical to keeping people’s devices safe from the latest threats. If people stopped downloading those updates out of mistrust, they wrote, the effects could be catastrophic for everyone:

Just as herd immunity to a disease is lost if enough members of the group are not vaccinated against the disease, if enough users stop auto-updating their devices, it will weaken the entire device security ecosystem. Indeed, one computer security expert has likened automatic updates to “a public health system for the Internet.” It is this whole system which the Court ultimately threatens to put at risk should it enforce its Order to Apple.

The digital sky is not falling:

The Electronic Frontier Foundation, along with a large group of technologists, slipped in a footnote about the FBI’s history of claiming it was about to be screwed by advancing technology:

For instance, in 1992 the FBI’s Advanced Telephony Unit warned that within three years [standard] wiretaps would no longer work: at least 40% would be unintelligible and in the worst case all might be rendered useless. Obviously, this has not occurred.

The victims don’t all side with the FBI:

Some of the families of San Bernardino victims have publicly sided with the FBI, but Salihin Kondoker, whose wife was non-fatally shot in the attack, wrote a letter to the court siding with Apple:

I believe this case will have a huge impact all over the world. You will have agencies coming from all over the world to get access to the software the FBI is asking Apple for. It will be abused all over to spy on innocent people. America should be proud of Apple. Proud that it is an American company and we should protect them[,] not try to tear them down.