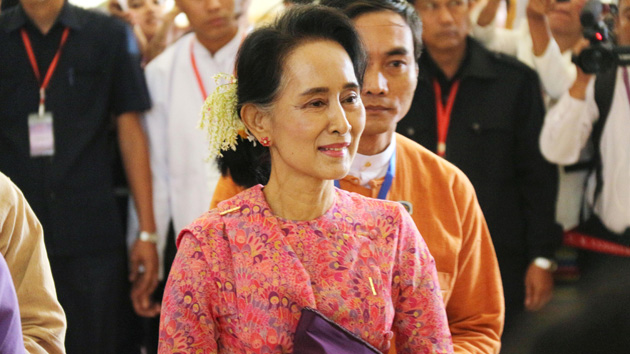 Aung San Suu Kyi, leader of Burma's National League for Democracy party, smiles after the first session of the country's popularly elected parliament in the capital Naypyidaw on February 1, 2016.Kyodo/AP

Update (3/15/2016): Burma’s Parliament on Tuesday elected Htin Kyaw as the country’s first civilian president after more than half a century of direct or indirect military rule. Members of parliament reportedly broke into applause when the result was announced. “Victory!” Htin Kyaw said. “This is sister Aung San Suu Kyi’s victory.”

Pro-democracy champion and Nobel laureate Aung San Suu Kyi won’t be Burma’s next president, but she’s one step closer to ruling her country anyway: On Thursday, her political party nominated one of her closest aides as a presidential candidate. If Parliament formally selects him next week—as it’s expected to do—he’ll likely serve as a proxy, with Suu Kyi pulling the strings from behind the scenes.

After decades of brutal military rule and five years of a military-backed but quasi-civilian government, Suu Kyi’s party won a landslide victory in Burma’s general election in November. But Suu Kyi, the country’s most popular politician, can’t become president because Burma’s constitution—written by military generals—makes her ineligible for the position. So instead, her party has nominated her aide Htin Kyaw for the job. “He is the closest to Aung San Suu Kyi and he is the one who would completely follow her advice,” a member of her party told the Washington Post. The president will be chosen by Parliament from among three nominees and will assume office in April; after dominating the general election, Suu Kyi’s party holds enough seats to ensure its nominee is selected.

The Obama administration and former Secretary of State Hillary Clinton have been pushing for years for democratic reform in Burma. After the general election, for example, President Obama personally called Suu Kyi to commend her work as a democracy champion. Still, Burma’s military has retained power over key ministries and continues to attack ethnic-minority rebel groups. “Burma’s not free yet,” Sean Turnell, a Burma expert in Sydney, told NPR. “It’s in a process of moving towards something better, but it’s not in that place of being a functioning democracy yet.”