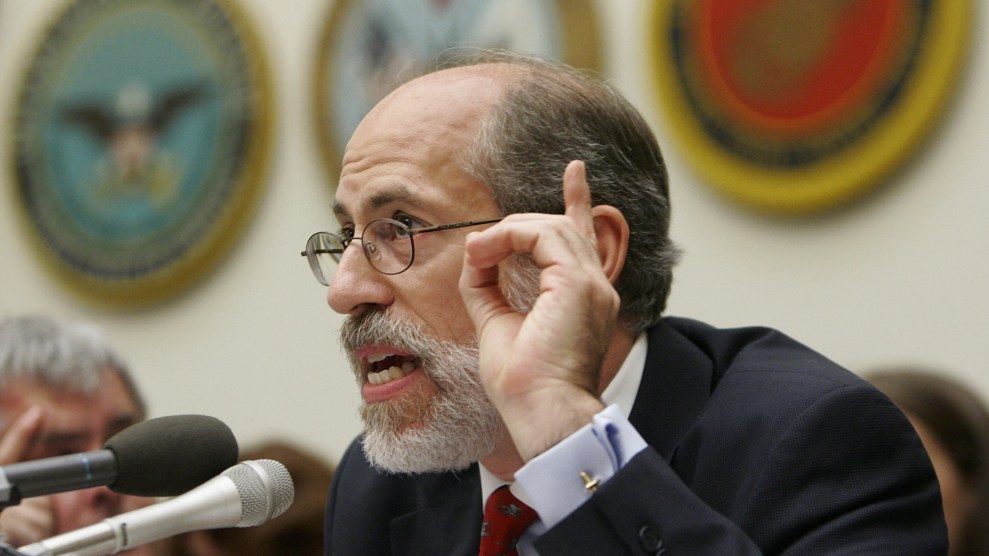 Update: On November 16, the Wall Street Journal reported that Frank Gaffney joined Donald Trump’s transition team to advise the president-elect on national security issues. Trump transition officials denied the report. The New York Times reported that the transition team is relying on Gaffney’s “advice,” but stopped short of claiming he was on the team. Journalist Eli Lake later tweeted that Gaffney said he had not been contacted by Trump, but that “I look forward to helping President-elect & the national security-minded team he is assembling in whatever way I can.”

Update: In May, NRA members voted to reject the effort to recall Grover Norquist from the NRA board, with 70,204 no votes to 62,066 yes votes.

The National Rifle Association’s annual board election is typically a drama-free affair. But this year, things are getting ugly. A faction within the NRA is seeking to oust anti-tax crusader and celebrated Republican strategist Grover Norquist from the gun lobby’s board of directors, where he has served since 2000.

The reasons behind the recall campaign have little to do with the Second Amendment, NRA policy, or Norquist’s position on gun rights. The effort is the latest move in an ongoing crusade to convince conservatives that the founder of Americans for Tax Reform is secretly in cahoots with anti-American Islamists.

The instigator of the Norquist recall is Stu Weber, a former Green Beret and pastor from Oregon. Last August, a recall petition sponsored by Weber was posted on the website RecallGrover.com. In it, Weber wrote that Norquist “has become a confusing distraction to the NRA’s mission” and that he was “aware of NRA members who are considering leaving the NRA because they have done some serious homework in regard to Mr. Norquist.” While speaking with Glenn Beck last August, Weber described himself as “just a member” of the NRA. He declined to be interviewed for this story. The recall site has been taken down.

While this is the first NRA board recall measure in at least 15 years, it is not necessarily a sign of a major split within the organization. Just 450 signatures from voting members were required to get it on the ballot. Members have until May 1 to cast their votes via ballots that were mailed out in American Rifleman, the NRA’s magazine. 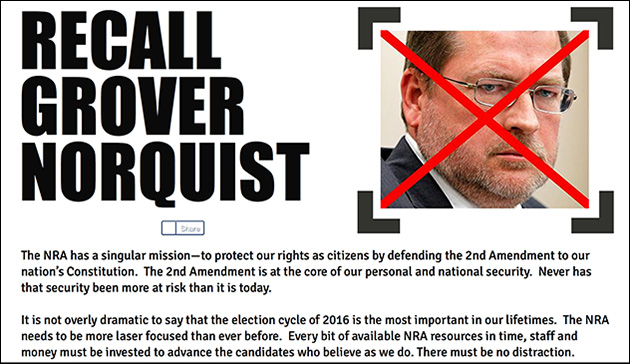 To bolster his case, Weber’s petition linked to Agent of Influence: Grover Norquist and the Assault on the Right, a 100-page dossier that lays out a litany of conspiratorial claims about Norquist and his supposed role “as an agent of influence for assorted Islamic supremacists.” Now in its fourth edition, subtitled “Targeting the NRA,” the booklet questions Norquist’s “fitness to serve in a leadership position of such an important organization” and aims to “encourage and enable the National Rifle Association to end the presence among its leadership of an individual who has long engaged in insidious Islamist influence operations.”

Agent of Influence is published by the Center for Security Policy, an organization headed by Frank Gaffney, a former Pentagon official in the Reagan Administration whom former Republican presidential hopeful Ted Cruz named to his national security team in March. Among the prominent conservatives who have backed Gaffney’s allegations against Norquist are former CIA Director James Woolsey and former Army Lt. General Jerry Boykin, with whom Weber wrote The Warrior Soul: Five Powerful Principles to Make You a Stronger Man of God. Last September, Gaffney joined Cruz, Beck, Donald Trump, and Sarah Palin at an anti-Iran rally co-sponsored by the Center for Security Policy. Gaffney could not be reached for comment.

“It’s not just a theory…Of course our enemies, through active or passive agents, would want to get into the NRA.”

Gaffney’s accusations against Norquist have been kicking around for more than a decade. “The initial accusation 15 years ago or so was that Norquist was going to somehow use his ties to the Muslim community to infiltrate the board of directors,” recalls Todd Rathner, who runs a lobbying and political consulting firm in Arizona and has been an NRA board member since 1999. He finds the case against Norquist laughable: “If your goal was to infiltrate the NRA board with Muslims, you’ve failed miserably. I don’t think there’s a single Muslim on the board. We don’t get the prayer rugs out.”

“It’s disconcerting to hear that people are saying this is just a personal attack from Gaffney,” says Joseph Schmitz, an attorney and former inspector general at the Department of Defense who has represented Weber’s recall effort. He says Weber was originally inspired by a 2005 book titled Infiltration: How Muslim Spies and Subversives Have Penetrated Washington, by Paul Sperry, who claims the Muslim Brotherhood is trying to secretly influence American conservative institutions. “It’s not just a theory,” says Schmitz. “That’s part of the overall strategy of the Muslim Brotherhood’s ‘civilization jihad.'” When asked whether these concerns of infiltration extend to the NRA, Schmitz responded, “Of course our enemies, through active or passive agents, would want to get into the NRA.”

The recall effort prompted a closed hearing last October at the NRA’s headquarters in Fairfax, Virginia, in which a panel of three board members heard the case against Norquist. Norquist was at the hearing; Schmitz, who represented the pro-recall side, was not allowed to question him. Following the hearing, the panel recommended a “no” vote on the recall, citing the “staleness” of the allegations and their “lack of factual support.” 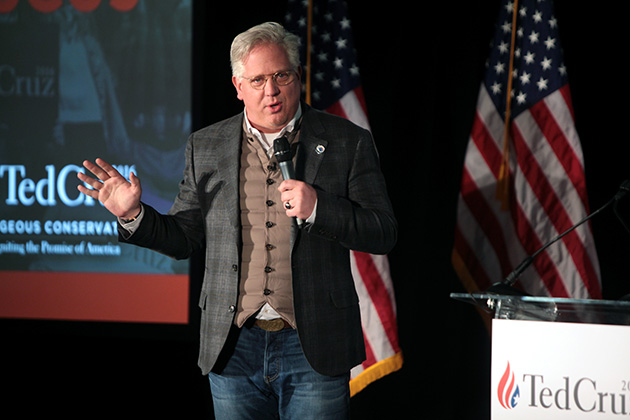 Glenn Beck, who supports recalling Grover Norquist from the NRA board, has endorsed Sen. Ted Cruz for president. The case against Norquist is built upon allegations made by Frank Gaffney, a top Cruz policy adviser. Gage Skidmore/Planet Pix via ZUMA Wire

Schmitz says he does not know of any NRA board members who oppose the panel’s decision. And Norquist, who did not respond to requests for comment, has plenty of high-profile supporters. Fellow NRA director Ted Nugent, who’s known for his Islamophobic and anti-Semitic comments, has asked the group’s members to  “defy the haters and liars” by keeping Norquist on the board. Pro-gun researcher John Lott wrote in an open letter, “The notion advanced by Frank Gaffney that Grover is somehow in league with terrorists who threaten the US is so bizarre that it is hard to believe that anyone would take it seriously.” Former Attorney General Edwin Meese, former Homeland Security Secretary Michael Chertoff, and former Undersecretary of Defense Dov Zakheim have also written letters in support of Norquist.

The current recall effort follows a failed attempt to convince NRA members to not reelect Norquist to another three-year term on the board. Shortly before last year’s board elections, Agent of Influence was mailed to all NRA board members. Norquist responded with a letter to the board, in which he lamented being targeted by a conspiracy-theory-peddling “stalker” and “some sad individuals who convince themselves that you are responsible for their personal failings.”

“If your goal was to infiltrate the NRA board with Muslims, you’ve failed miserably. I don’t think there’s a single Muslim on the board. We don’t get the prayer rugs out.”

The ever-excitable Beck, who had already sounded the alarm on Norquist’s purported Islamist connections, threatened to quit the NRA if Norquist remained on the board. While hosting Gaffney on his show last March, Beck declared, “Grover Norquist is, I believe, one of the most dangerous men in America.” Shortly afterward, Beck informed his audience that NRA executive vice president Wayne LaPierre had told him that the organization was launching an “ethics investigation” into Norquist. In a letter to NRA members, Beck wrote, “Wayne assured me and asked me to convey to you, that he and the NRA are taking this very seriously.” Beck is supporting the recall effort.

The results of the investigation have not been made public. Yet Norquist was reelected handily, receiving more than 64,000 votes. “NRA members heard the story. They rejected it. They reelected Grover,” says Rathner. The NRA did not respond to a request for comment.

Gaffney’s allegations of Islamist intrigue are not limited to Norquist. In 2009, he said “there is mounting evidence” that President Barack Obama “not only identifies with Muslims, but actually may still be one himself.” He has alleged that longtime Hillary Clinton aide Huma Abedin has “extensive personal and family ties to the Muslim Brotherhood” and has called her “Hillary Clinton’s ticking time bomb.” Gaffney has claimed the Muslim Brotherhood “infiltrated” the Conservative Political Action Committee, which got him temporarily banned from its annual conference.

Gaffney has said he is “an admirer” of the NRA and “I don’t want to see any harm come to it.” Despite the public spectacle, Rathner isn’t too concerned that the Norquist recall campaign will embarrass or weaken the group. “If it’s successful, then the Bloombergs of the world, the Moms Demand Action, they will be all over the internet tweeting that the NRA is damaged,” he says. “Will it actually do damage? No. The NRA would go on and continue to be the powerhouse that it is and always will be.”