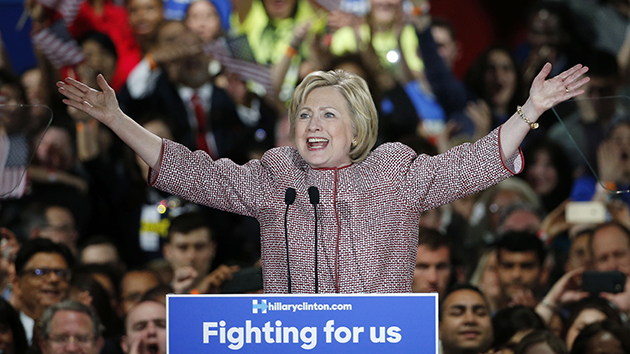 After a decisive victory in New York on Tuesday, Hillary Clinton’s campaign called on Bernie Sanders to strike a more positive tone in the final two months of the primary contest, hinting that the senator from Vermont should ultimately leave the race gracefully without damaging the party’s chances of winning in the fall. As an example for how Sanders should conduct his campaign, a Clinton aide pointed to how the then-Sen. Clinton helped unite the party behind Barack Obama in 2008.

Speaking with reporters after Clinton’s victory rally in Manhattan Tuesday night, the Clinton campaign’s communications director, Jennifer Palmieri, called on Sanders to run a more positive, issue-based campaign. “He needs to decide as he closes out the Democratic primary if he is going to continue on the destructive path that he started down in the New York primary, where he is making personal character attacks against her that mimic the attacks that Republicans make and aid Republicans, or if he is going to end this primary the way that he promised to run—the kind of campaign he said he would [run]—that was focused on issues,” she said. “There’s no question that Sen. Sanders, that the behavior of him and his campaign has been destructive.”

Palmieri pointed to Sanders’ recent comment that Clinton is not qualified to be president—a remark Sanders quickly walked back—as well as his assertion in the last debate that he questioned her judgment. She also noted that the Sanders campaign on Monday accused the Clinton campaign of campaign finance violations.

Palmieri cited Clinton’s own example in the 2008 primary against Obama as a guide for Sanders. Because Clinton stayed in that race until June, she said the Clinton team respects Sanders’ decision to see the race through to the end. But, she noted, Clinton did not contest Obama’s win at the Democratic National Convention in Denver that year.

Palmieri did not note the nasty tone of the 2008 contest. “I think she set a gold standard for how people who don’t end up with the nomination, who lose in that effort, should come together and help the party,” she said. “Given the primary that they went through, where they both went all the way to the end, very hard fought, to come and ask to play that role and be the person who says, ‘By acclamation, I say this party stands behind this nominee and he’s going to be our next president.’…That’s what we have seen happen before. We think that can happen again.”