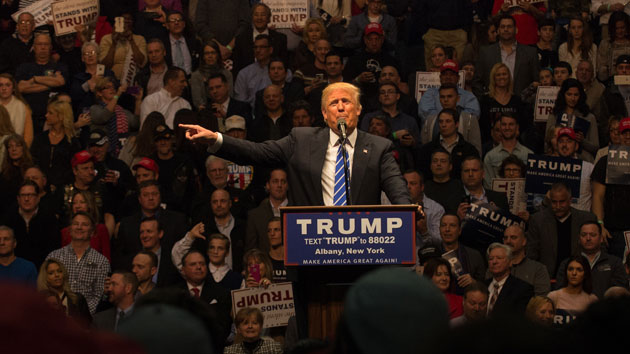 Donald Trump is counting on a hometown boost in Tuesday’s New York primary showdown against Ted Cruz. The Texas senator has taken heat from prominent Republicans there, such as Rep. Peter King and ex-Mayor Rudy Giuliani, for his comments about “New York values” and his campaign positions. (“Any New Yorker who even thinks of voting for Ted Cruz should have their head examined,” King told an interviewer last week.) When Cruz visited the Bronx, he was heckled repeatedly.

But perhaps no candidate has done more to offend the sensibilities of New Yorkers over the years than Trump, a tabloid fixture who was once sued by the Department of Justice for housing discrimination in Brooklyn and Queens and who spent $85,000 on advertisements demanding the state “bring back the death penalty” after the arrest of the (wrongfully convicted) Central Park Five.

Trump sought to use his influence in the city on more pedestrian matters, too. In a 1985 letter, Trump complained to then-Mayor Ed Koch about the blight of hot-dog vendors leaving ketchup and mustard stains on his sidewalk.

While I usually agree with your decisions and philosophy (except as they concern me), I cannot understand how you can allow once one of the truly great streets of America, Fifth Avenue, to be overrun by peddlars [sic] and food vendors. They have created such a blight that shoppers and visitors alike are appalled to see the decline of this historic avenue. Having ketchup and mustard splattered all over the sidewalk by vendors who “couldn’t care less” is disgraceful. I only wish I had their political muscle—they really need it in order to keep this outrage going.

I know that you must have your reasons and also know that you won’t change your mind, but it is a shame. As the filthy food carts come in, the Guccis, Jourdans, et cetera will leave, and with them both prestige and taxes will be lost to the City forever.

After signing off, he added one last shot. “P.S. The new ‘act’ on Fifth Avenue is the humongous vegetable stand which operates at Fifth Avenue and 57th Street,” Trump wrote. “It does wonders for increasing the value of real estate on Bond Street in London and the Champs Elysses [sic] in Paris.”

The correspondence with Koch was included in the personal papers of former New York Times executive editor A.M. Rosenthal at the New York Public Library.

Trump’s beef with street vendors was not a one-time thing. In The Art of the Deal, his best-selling memoir, he lamented the “peddlers” who were “degrading” Fifth Avenue. “I learned a lesson from Walter Hoving,” he wrote, referring to another New York developer. “I now employ some very large security people who make absolutely sure that the street in front of Trump Tower is kept clean, pristine, and free of peddlers.”

Update: This was a really longstanding beef. The New York Daily News reported that Trump also complained about the Fifth Avenue food vendors in 2004 to then-Mayor Michael Bloomberg. Evidently the problem wasn’t fixed.