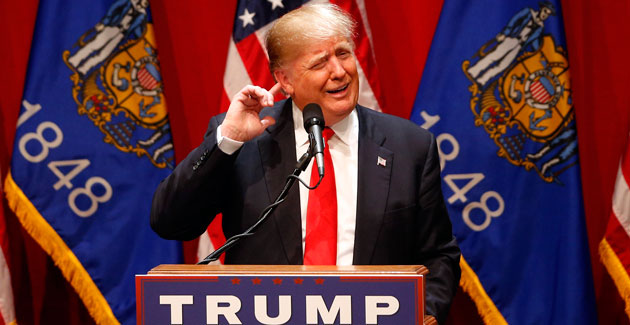 That giant whoosh you heard on Tuesday night? That was the the collective sigh of relief from all those GOP establishmentarians reacting to the news that loudmouth celebrity tycoon Donald Trump lost the Wisconsin primary to Sen. Ted Cruz of Texas. It certainly is delicious to see Republican pooh-bahs rooting for Cruz, perhaps the Republican most despised by other Rs in the nation’s capital. But the GOP’s self-created Trump problem is far from resolved. And I’m not talking about delegate math or the possibility of a open convention (with or without rioting and revolt). Nate Silver and others can spell out what’s possible and not regarding Trump or Cruz collecting sufficient delegates to claim the nomination. And anyone who watches cable news can opine on what might go down at the Cleveland convention if neither Trump nor Cruz (sorry, John Kasich) bags a clear majority of delegates. What comes after Wisconsin can and will be gamed out endlessly. Still, even if the assorted scenarios provide hope to Republican insiders praying for Trump’s demise, the GOP will remain scarred and, as George H.W. Bush might say, in deep doo-doo.

There are at least three reasons why Republicans ought not yet celebrate. First, whether Cruz is on the march or not, the Trump-fueled civil war within the party is far from done. Since the start of the campaign, political observers have noted that there seems to be a ceiling on Trump’s support within the Republican electorate. At first, it appeared the limit was in the 25 to 33 percent range. And when there were more than a dozen candidates, this was certainly a large enough bloc to provide Trump an impressive plurality. Moreover, at one stage, Trump’s ceiling did rise and reach nearly 50 percent in national polling. In recent weeks, Trump has dropped to the 32 to 43 percent range, while maintaining a national lead over Cruz of 7 to 13 points. Bottom line: There are a lot of Trumpites, and they are not going anywhere. Even if Cruz somehow manages to consolidate the non-Trump vote—a difficult task while Kasich sticks it out—Trump will continue to claim a large chunk of supporters craving his furious mix of populism, nativism, and nationalism. True, Trump may not be able to expand that slice any longer. (The derogatory manner in which he crushed several primary foes and forced their exits from the race likely alienated the supporters of these candidates.) But many of Trump’s backers remain angry: angry at Washington, angry at the world, and especially angry at the GOP. Putting aside the question of whether Trump will bolt the party and run as an independent, his supporters will not be easily absorbed by the party. Riots or not in Cleveland, they could well be a disruptive element within the GOP. By the way, a recent poll notes that 52 percent of Republican voters believe that if Trump ends up with the most delegates yet not quite a majority, he still should receive the nomination; 40 percent don’t think so. That means that if a Cruz surge does prevent Trump from reaching the magic number of 1,237 delegates but the billionaire finishes in the top spot, the GOP establishment will tick off not only Trump voters but also other Republicans if it plots to deny Trump the nomination.

To get to the front of the pack, Trump exploited the politics of hate that had been encouraged by Republicans throughout the Obama years (see birtherism), and he inflamed these passions within the tea party base—and directed them against the GOP itself. A primary loss for Trump in the Badger State or elsewhere will not douse the flames. They will continue to threaten the house the Republicans built.

Reason No. 2: If Cruz’s win in Wisconsin does somehow signal Trump’s day will not come, #NeverTrump insider Republicans could end up being stuck with…well, Cruz. The primary process has to play out, and there’s no telling what will happen at the convention. (Maybe Megyn Kelly will be nominated.) But certainly Cruz’s odds have improved. And he is hardly the candidate the GOP power brokers (such as they are) yearned for at the start of this crazy process. It’s not just that Cruz is widely regarded—on his side of the aisle—as an arrogant and opportunistic jerk. He is not a candidate for the swing states. He does not, as the political pros say, change the map. (As in, what state can he win that Mitt Romney didn’t?) He is a strident ideologue and a committed obstructionist. And he’s proud of that. He boasts about having precipitated a government shutdown and praises himself as a “courageous” conservative who doesn’t fancy cutting deals. He enthusiastically decries abortion rights, gay rights, and gun safety measures. He’s in camp that claims climate change is a hoax. His appeal does not extend far beyond voters who are seeking a die-hard rightist to eviscerate the federal government.

For years, conservative activists—and the de facto leaders of their movement, radio talk show hosts—have contended that the GOP lost recent presidential elections because it nominated squishy GOPers (that is, Romney and John McCain) and that victory can only be achieved if the party embraces an unapologetic conservative. In other words, they want a Barry Goldwater. In 1964, that didn’t work out so well for conservatives and Republicans, though, obviously, Ronald Reagan did score big 16 years later. These days, many conservative leaders are craving a Cruz nomination. But here’s the question: Is Cruz more like Goldwater or Reagan? The answer may be obvious to all but Cruz and his supporters. So congratulations, Republican bigwigs; you may have traded Trump (a potentially unconventional disaster) for Cruz (a potentially conventional disaster).

Finally, none of this has been good for the Grand Old Party brand. Whether the nominee ends up being Trump, Cruz, or a candidate born out of the chaos in Cleveland, the Republican contest has bolstered the notion that this party is a safe place for bigotry, xenophobia, extremism, and obstructionism. Trump’s misogynistic and racist comments found a cozy home within the GOP. (Exit polls show that two-thirds or so of Republican voters backed his call for banning Muslims from entering the United States.) To keep up with Trump, Cruz, following the recent terrorist attacks in Belgium, called for using the police to monitor Muslim neighborhoods in the United States. He says he would, if elected president, repeal every stitch of Obamacare, without providing details about a possible replacement. The Republican debates have been dominated by juvenile insults, not serious policy disputes. Meanwhile, the Senate Republicans refuse to consider President Barack Obama’s nominee to fill a vacancy on the Supreme Court. Overall, the party these days does not convey seriousness. It looks as if it’s mostly concerned with playing to its own crowd. Whether it’s Trump, Cruz, or the Senate Republicans, the main action is throwing bones to one part of the base or another. (When—or if—Kasich wins a primary other than one in his home state, his above-the-fray conduct might warrant analysis. For now, he is an outlier.)

At this point in this article, it’s time for the obligatory reference to The Autopsy—the study that GOP chief Reince Priebus commissioned after his party was shellacked in the 2012 presidential race. You know what it said: The Republicans had to be more inclusive, come across as problem-solvers instead of chest-thumpers, show tolerance for diversity, and appeal to more women and Latinos. This is not the road map being used by Trump, Cruz, or the Senate GOPers. Each has achieved political success by embracing one or more of the elements Priebus identified as the worst of the GOP. The uber-message is that the Republicans care more about attitude (Trump), ideology (Cruz), or gamesmanship (the Senate Rs) than responsible governance and serious discourse. The NeverTrumpers of the GOP might be cheering and toasting the Wisconsin results. But they ought to keep the bottle handy because there are plenty of sorrows yet to drown.