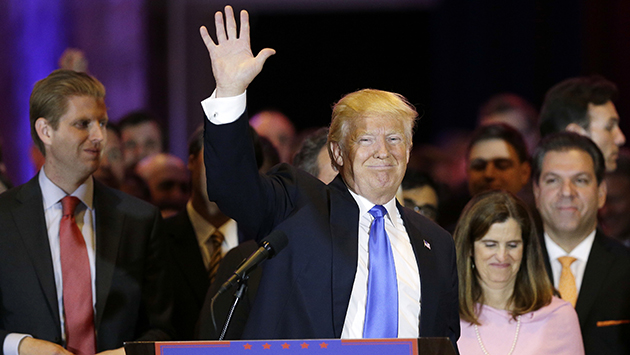 Tuesday’s Republican primary in Pennsylvania was the ultimate test of the three campaigns’ ground organization. And the candidate who’s been most widely impugned for his ground game came out on top by a vast margin.

Donald Trump won the Pennsylvania Republican primary with 57 percent of the vote. But that was only half the battle in the Keystone State. Unlike voters in most states, who select the candidate of their choice (or a slate of delegates listed under that candidate), GOP voters in Pennsylvania see only delegates’ names on the ballot. The delegates they elect to the Republican National Convention in Cleveland are not obligated to support any particular candidate at the convention. That means that for the candidates, getting sympathetic delegates elected is just as important as winning the popular vote.

The Trump campaign nailed this challenge. According to ABC News, at least 41 of the 54 unbound delegates in Pennsylvania will back Trump. Runner-up Ted Cruz has the support of just three delegates in the state, while nine remain uncommitted.

Pennsylvania’s system of directly electing delegates presented a challenge for the campaigns. A Republican voter in Pennsylvania needed to know not only his or her choice for president, but also which candidates for delegate would support that person in Cleveland this summer. That required the campaigns to do two things: ensure that sympathetic delegates made it onto the ballot (or at least identify the supportive candidates) in each congressional district, and launch a substantial information campaign so voters would know which delegates to choose.

Trump was not expected to perform well in this regard. His campaign, which has built its success on a massive press and social-media presence, has been criticized for its lack of ground organizing, which presaged trouble in the crucial delegate-wrangling stage in the latter part of the race. The Cruz campaign has been getting credit for its behind-the-scenes maneuvering to send pro-Cruz delegates to the convention in Cleveland; in states like Colorado, for example, Cruz’s delegate strategy won him nearly every delegate from the state and left none for Trump.

But in Pennsylvania, the Trump campaign educated its supporters better than the Cruz campaign, and the results showed.

Trump’s slate swept 7 of Pennsylvania’s 18 districts (provisional count), which is surprising bc who the delegates support is not on ballot.

Pennsylvania will send 71 delegates to the national convention: 17 at-large delegates and three delegates from each of the 18 congressional districts. Let’s look at one of these districts, Pennsylvania’s 4th Congressional District. The three pro-Trump candidates for delegate here beat out 12 other candidates.

Local Republican leaders in the 4th Congressional District witnessed a highly organized Trump campaign. In the final days of the race, the Trump campaign mailed a slate card to Republican voters in the state that listed the pro-Trump delegate slates in each district. Alexander Shorb, the chairman of the York County GOP who ran as an uncommitted delegate candidate in the 4th District and lost to the pro-Trump candidates, visited polling locations throughout the day. He estimates that 80 percent of pro-Trump voters showed up to the polls with their slate card or with the names of the pro-Trump delegates on their phones. For those who came unprepared, teams of Trump volunteers were stationed at many polling locations, giving out information on the Trump slate to supporters in line to vote.

“There was a Trump supporter handing out literature only for Donald Trump at almost every polling location in York County,” says Shorb. “I went to the heaviest [trafficked] polls and there was not one person handing out Cruz material at any one of them. So as far as a ground game, he had none.”

Charlie Gerow, another uncommitted candidate in the 4th District, believes that Trump’s ground operation in the state was largely run by volunteers. “But they were exceptionally well organized in the last 48 to 72 hours of the campaign,” he said, pointing to the direct mailings and the Trump supporters at the polling locations. “They put money behind it,” he said of the campaign’s operation. “To have mailed into every congressional district took significant resources, and they did it.”

Gerow has been elected as a delegate to the Republican Party’s last 10 national conventions. But it quickly became clear to him Tuesday that he might lose this time around to the delegates backing Trump. A few days before the primary, an elderly woman in his neighborhood asked him for a ride to the polls, so early Tuesday morning he drove her to her local precinct to vote. “We are driving back to her house and she put her little hand on my arm and she said, ‘I’m so sorry I couldn’t vote for you today,'” Gerow recalls. “She had the little Trump card in her hand.”