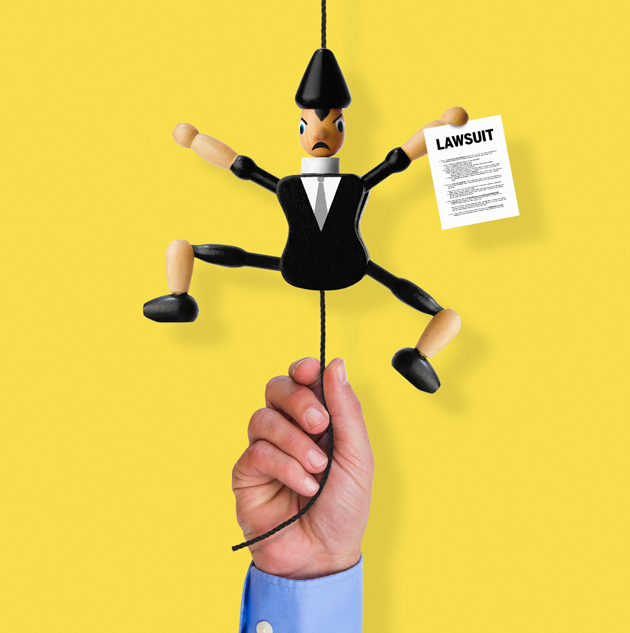 When Supreme Court plaintiffs speak to the press on the courthouse plaza after their cases have been argued, they usually refer specific questions to their lawyers. But on December 9, after the oral arguments in Fisher v. University of Texas, when I threw some queries at 25-year-old Abigail Fisher, she deferred not to her lawyer, but to “Edward,” the dapper, gray-haired man who had accompanied her to the hearing. Edward Blum is not an attorney, but he deserves much of the credit for getting Fisher’s case before the high court. Eight years ago, the mild-mannered 64-year-old former stockbroker recruited Fisher for his legal challenge to the consideration of race in college admissions, and he arranged a lawyer and financing for her case.

It had been a busy week for Blum. A day earlier, he’d been at the court for the oral arguments in Evenwel v. Abbott, an attempt to strike down the long-standing method of drawing legislative districts. That case’s Blum-backed plaintiffs asked the court to require states to create districts based on the number of eligible voters instead of the total population, a change that, if endorsed by the conservative justices, would have diluted minority representation and shift more power to rural white districts that tend to lean Republican. (The eight-member court just ruled unanimously against the plaintiffs.)

Those two cases were just the latest instances of Blum’s success at getting the high court to hear objections to the legal legacy of the civil rights movement. Over the past two decades, Blum has orchestrated about a dozen suits inspired by what he says is his desire to create a “color-blind” society. Four have made it to the Supreme Court since 2009.

“Groups like mine are not looking for Donald Trump-type supporters,” says Blum. “We reject people who have an antithetical view of American civil rights laws.”

Blum started his crusade in the 1990s after running for Congress as a Republican in the heavily Democratic Texas district once represented by civil rights activist Barbara Jordan. After he lost soundly, he spent $75,000 of his own money to file a legal challenge to what he saw as the district’s racial gerrymandering—the zigzagging boundaries that had been drawn to boost its minority population and to protect incumbents. Blum and the other plaintiffs he recruited for the case, known as Bush v. Vera, went all the way to the Supreme Court in 1995. A 5-4 decision, authored by Justice Sandra Day O’Connor, forced Texas to redraw the boundaries of two majority-black districts and one majority-Hispanic district.

Blum went on to set up the Project on Fair Representation in 2005. Until recently, it was funded by a secretive network of conservative donors and foundations that footed the bill for its lawsuits. As the organization’s director and sole employee, Blum recruits new plaintiffs and connects them with conservative lawyers such as William Consovoy, a former clerk for Justice Clarence Thomas who’s worked on some of Blum’s most successful cases.

One of those cases was Shelby County v. Holder, which the conservative justices used to gut a section of the Voting Rights Act that required states with a history of voter discrimination to clear any changes to their voting rules with the Justice Department. The 2013 decision paved the way for new restrictions, such as expanded voter ID requirements, that have made it more difficult for African Americans and Latinos to cast ballots in Southern states.

Advocates of all stripes do hunt for Supreme Court plaintiffs who sign on to their test cases. But Blum seems to have had difficulty finding individuals who are ready for prime time. Take the plaintiffs in Evenwel. Sue Evenwel is a member of the Texas Republican Party’s executive committee and a booster of tea party favorites such as Sarah Palin and Sen. Ted Cruz (R-Texas). In 2012, the Titus County Repub­lican Party, which she chairs, screened a film that suggests President Barack Obama’s real father was an African American communist. In an op-ed, she has warned that showing tolerance to Muslims means Shariah law could “usurp the US Constitution.” More relevant to her case, Evenwel has claimed that Texas’ current process of drawing legislative boundaries is meant to give “equal representation to a block of undocumented people who are not eligible or registered to vote.” (She did not respond to requests for comment.)

Her co-plaintiff, Ed Pfenninger, is a Christian fundamentalist who has a YouTube channel where he’s posted hours of videos on his viewpoints. He doesn’t believe the Earth revolves around the sun. He has described the Catholic Church as “the mother of harlots,” said Jews are “enemies of the cross,” and cited the Bible to justify his belief that women with short hair are shameful.

Blum, who says he’s known Pfenninger for 15 years, was unfamiliar with his views on science and outraged at any suggestion that he should have vetted Pfenninger’s religious beliefs. “These are civil rights cases,” Blum told me. “I don’t need to quiz everyone about their views on climate change, evolution, or global warming. I just need to know that someone is not a bigot.” When I directed Blum to some of Pfenninger’s and Evenwel’s more inflammatory statements, he replied with a short email. “I remain persuaded that my clients are not bigots, racists, or anti-Semites,” he wrote. When Evenwel was subsequently heard by the Supreme Court in December, its two plaintiffs did not appear before the press on the courthouse steps.

Court watchers and civil rights advocates believe the Fisher case might be a warm-up for a couple of “sleeper” cases that could deal a death blow to affirmative action in college admissions.

It took Blum nearly three years to find a friendly face for his attack on the affirmative action program at the University of Texas, his alma mater. He even set up a website called UTNotFair to attract potential plaintiffs. In the end, he settled on Fisher, the daughter of an acquaintance.

Fisher has said she filed her suit because UT-Austin rejected her while letting in her black and Hispanic high school classmates with lower grades. However, her grades and test scores would not have won her a spot at UT even if she had been black, according to documents filed by the university. Nor was she completely shut out: The university told her that if she attended another campus in the Texas system for a year and maintained a B average, she could transfer to Austin—an offer she rejected. (Fisher has since graduated from Louisiana State University.) During oral arguments, Justice Ruth Bader Ginsburg quizzed Fisher’s lawyer about what compensation Fisher could possibly gain at this point. The answer was, essentially, her application fee of roughly $100.

Court watchers and civil rights advocates believe the Fisher case might be a warm-up for a couple of Blum’s “sleeper” cases that could deal a death blow to affirmative action in college admissions. An organization Blum created, Students for Fair Admissions, is suing Harvard University, accusing it of discriminating against Asian American applicants and drawing comparisons to the university’s past record of bias against Jews. The complaint, filed in federal court in Boston in November 2014, argues that exceptionally qualified Asian kids, including many with perfect SAT scores, are being shut out because Harvard wants to limit their numbers. Blum’s group has launched a similar case against the University of North Carolina-Chapel Hill.

For now, the sole plaintiff in these cases is Students for Fair Admissions, rather than actual students. Its legal filings suggest Asian American students are not exactly lining up to join Blum’s latest cause. They cite a single, unnamed Asian American student who was denied admission to Harvard. Pages and pages of the complaint against UNC outline the university’s alleged discrimination against Asians. Yet the only student identified as having been rejected is not named as a plaintiff. He is white.