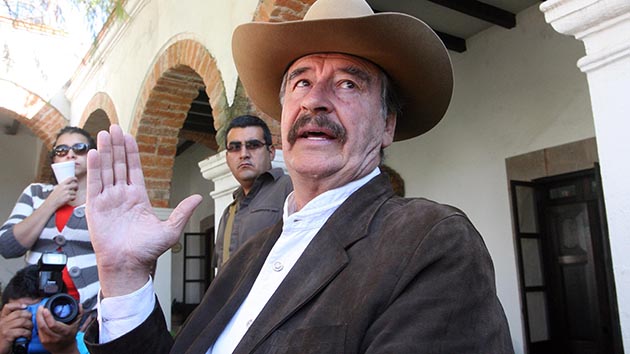 In an interview with Mother Jones on Tuesday, former Mexican president Vicente Fox intensified his war on Donald Trump and the GOP front-runner’s proposed wall between the United States and Mexico. In February, Fox declared, “I’m not going to pay for that fucking wall.” At that time, Trump had not detailed how he would make good on his plan to force Mexico to pay for the border wall. Since then, Trump has released a plan to compel Mexico to pick up the tab. He would demand from Mexico a one-time payment of $5 billion to $10 billion, and if Mexico failed to comply, he would freeze all wire transfers between undocumented workers and their home countries. He would also impose stiff trade tariffs on Mexican products and cancel visas for Mexicans traveling to the United States, and Mexican travelers would have to higher fees for visas and for border crossing cards.

Asked about Trump’s plan, Fox exclaimed it was “crazy” and demonstrated Trump’s “ignorance about the economy.” Fox added, “We cannot take him seriously.”

A wall along the southern border of the United States has become Trump’s most popular campaign promise. At his rallies, he routinely asks his throngs of supporters, “Who’s going to pay for the wall?” They scream in response, “Mexico!” In early April, when he released his plan for the wall, he estimated its construction would cost $8 billion he estimated. A more realistic estimate put the total closer to $25 billion, if he could even build it at all. His proposal asserted, “[W]e have the moral high ground here, and all the leverage.”

Fox, the president of Mexico from 2000 to 2006, doesn’t think so. He told Mother Jones Tuesday that Trump’s plan makes no sense and would never happen. “It’s an absolutely crazy idea, it’s totally arbitrary, and it goes against established [practices] on transferences,” he said. “It’s impeding against the free transfer system that works throughout the world. He cannot do that. It’s impossible.”

Fox noted that Trump’s plan would backfire and harm the US economy, perhaps even Trump’s own businesses. Mexico and other countries, he said, would likely retaliate against the United States by imposing their own fees or restrictions on US money transfers, which would hurt American business. “It’s absolutely crazy,” Fox repeated. “It’s ignorant.” (Fox has trolled Trump on Twitter several times regarding the wall.)

Increasing tariffs on Mexican goods—and perhaps getting into a trade war with China, as Trump has suggested—would hurt US corporations doing business overseas, Fox insisted, and “kill the United States economy as we know it today.”

Trump campaign spokeswoman Hope Hicks did not respond to a request for comment.

“Okay, what about the retaliation of Mexico, [which will say] I will not give visas to Americans to come to work in Mexico, or to come to Cancun?” Fox said. “It’s absolutely stupid. He’s going against all the operating procedures that we have developed worldwide through 200 years of history and open markets.”

Fox maintained that Trump shouldn’t be taken seriously, but he added, “The problem is that he’s causing severe damage to relationships that we hold in the world, diplomatic relationships, with all the free world. It’s just stupid.”

Trump has said that Mexico “has taken advantage” of the United States by allowing “gangs, drug traffickers, and cartels” to infiltrated the country and commit crimes here. Fox countered that the American drug market is the biggest in the world. “How can he have the moral ground if all of those drugs are consumed by his own citizens?” Fox remarked. “The huge drug consumption, the largest in the world, is right there in the United States.” Fox said the United States needed to do a better job of getting its own citizens to stop using drugs. He favors legalization as a means of reducing cartel violence. He also pointed out that most of the illegal drugs in the United States come from Central and South America (though the Mexican cartels do play a significant role).

Trump, Fox commented, is “showing his total ignorance about the way things work in this world.”