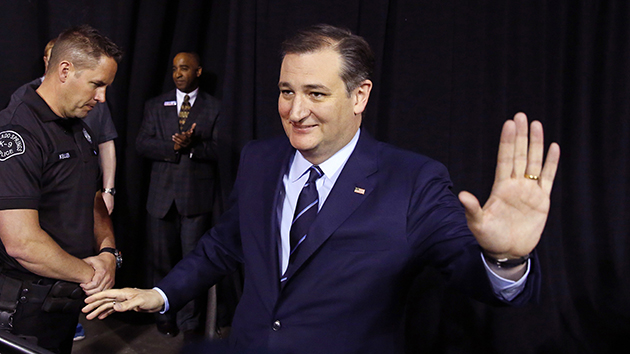 Victor Williams has a theory about Ted Cruz. He believes the Canadian-born senator is not a “natural born citizen” and is thus ineligible to be president. And he’s decided to prove it the only way he can: by running for president himself.

Cruz is pulling “a long con” on the American people, says Williams, a law professor at the Catholic University of America, in Washington, DC. He believes Cruz is attempting to be “born again”—not in a religious way, but by using American citizenship laws to claim natural born status, which he believes the Constitution reserves only for those born on American soil. “It’s an impossibility to make someone reborn on American soil when they were born in Canada,” he says. “That probably sounds a little wackier even than running for president.”

Around the country, individual voters have filed complaints with state election officials and lawsuits in federal and state courts to keep Cruz off the presidential ballot. Most of these challenges have gone nowhere. One major obstacle to challenging Cruz’s eligibility is that ordinary citizens don’t have standing to bring suit over the issue. To have standing to sue, the party bringing the case must have a particular injury that can be remedied by the outcome of the case. Many courts, particularly federal courts, have found that citizens are not sufficiently injured by Cruz appearing on the ballot.

Enter Williams. Though ordinary citizens generally do not have standing, rival candidates might. In two previous cases from 2008, federal courts recognized the theory of “competitive standing,” the idea that a competitor could be injured by an ineligible candidate siphoning off votes that could come to the plaintiff. So Williams decided to become a competitor. To do so, he has notified nine states of his intention to run as a write-in candidate.

This won’t automatically give him standing. Federal and state courts could decide that a write-in challenger running solely to get standing is more like a citizen than an actual competitor. But Williams has researched the issue and found a smattering of state court cases that treat write-in candidates as genuine opposition. Moreover, he says, some states require write-in candidates to jump through a number of hoops in order to run—signaling, he believes, that they are considered serious candidates. “So that’s what I’m hanging my hat on,” he says.

Around the country, state and federal courts are now being asked to weigh in on this question. At least six cases have been filed in federal court; all but one, in Texas, have been dismissed. (A hearing over a motion to dismiss in the Texas case is scheduled for Wednesday.) In state court, where these cases might have stood a better chance because state laws govern ballot access, at least five cases have been filed, and four of them have been dismissed. Of those cases, only one received a ruling on the merits when the Pennsylvania Supreme Court affirmed a lower-court ruling in late March that Cruz is a natural born citizen.

Though Cruz and the media have generally treated the debate over his eligibility as frivolous, some legal scholars believe the question at issue is a valid one. “I think it’s a serious question,” says Derek Muller, an election law expert at Pepperdine University School of Law. “I tend to think he is a natural born citizen, I think that’s where most of the consensus is. But I don’t think it’s completely frivolous.” He cited arguments that point to the ambiguity of the term “natural born” and disagreements over the meaning of the term within prevailing English precedents at the time of the Constitution’s drafting.

“I think everyone kind of dismisses this as kid stuff,” says Muller, who has been tracking the ballot challenges against Cruz. But he predicted, “If any single state court judge finds that Cruz is ineligible and needs to be removed from the ballot, I think you will see some amazing litigation. Once you actually remove their name from the ballot, that’s when Armageddon breaks loose.”

To Williams, the most convincing argument against Cruz’s eligibility was a Slate article by University of Chicago Law School professor Eric Posner, who argued that at the time the Constitution was drafted, “natural born” was widely understood to mean born on US soil.

Williams intends to be a write-in candidate in California, Oregon, Washington, New Jersey, Montana, Nebraska, Pennsylvania, and South Dakota. He looked for states that met three criteria. First, they had to recognize write-ins. Second, they had to “have some bar to the write-ins such that I end up [having] an argument for [being] a legitimate candidate.” And finally, the primaries needed to be “far enough out that I can litigate and maybe get a ruling before the election date.” (South Dakota actually doesn’t take write-ins, so he is attempting to appear on the ballot as a Republican.)

Williams also filed as a write-in in Wisconsin, only days before the state’s April 5 primary, which Cruz won handily. He still hasn’t gotten a response from the Government Accountability Board, which oversees elections in Wisconsin. “I formally asked them to take Mr. Cruz off the ballot and, um, they haven’t responded,” he admitted the day before the Wisconsin primary. “But,” he added optimistically, “there’s nothing to stop me to have an ex-post litigation.”

Once he has filed as a write-in, Williams’ next move is to file cases in state court, where the standing barriers are typically lower—and because state, not federal, law generally governs ballot access. The ultimate goal is to get two state Supreme Courts to disagree over the natural born citizen question. If that happens, he believes the US Supreme Court would have no choice but to resolve the dispute and decide, once and for all, what it means to be a natural born citizen.

If Williams succeeds, his effort to disqualify Cruz—or even raise serious questions about his eligibility—will likely benefit Donald Trump. After initially backing Hillary Clinton, Williams grew disillusioned over the investigation into her email controversy and switched his registration from Democratic to Republican. He now supports Trump.

Muller sees a number of obstacles to the lawsuits challenging Cruz’s eligibility. “Overcoming standing is just one of the many barriers,” he says, naming a long list of reasons a state court could decide not to rule on the issue. State courts could decide this is a political issue, or a question for Congress, or a question that is not “ripe” for consideration until the general election, or even that state law does not require the state to ensure eligibility for ballot access. “So there are lots and lots of ways for these things to fail even before they get to the merits,” he says, “and then on the merits, it’s a big challenge to convince the court that ‘natural born citizen’ excludes Ted Cruz.”

Williams’ gambit, he concludes, is a “long shot.” Just “slightly less of a long shot than your average voter’s.”