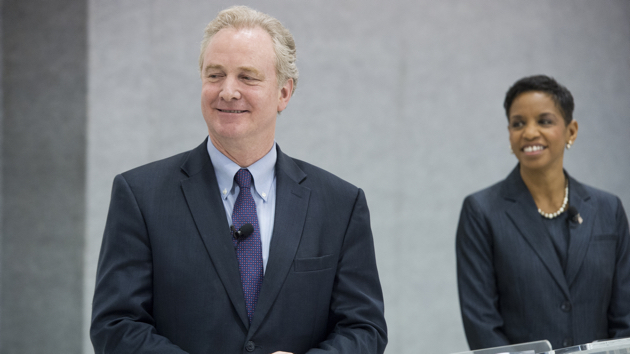 Chris Van Hollen and Donna Edwards at a forum in Gwynn Oak, Maryland, in AprilTom Williams/AP

At first glance, the Democratic primary for a US Senate seat in Maryland looks eerily similar to the party’s national contest between Hillary Clinton and Bernie Sanders. On one side, there’s an establishment candidate, Rep. Chris Van Hollen, who has been in politics since the early 1990s, defines progressivism by legislation passed rather than promises made, and touts wonky policy papers and bills on the campaign trail. On the other, there’s a challenger from the left, Rep. Donna Edwards, who appeals to a national progressive audience with big-picture rhetoric rather than nitty-gritty deal-making.

But this contest doesn’t align neatly with the narrative of the Clinton-Sanders face-off. Rather than a clash of ideologies, the Maryland race has become partly a battle of identity politics. Van Hollen is a white guy, and Edwards is an African American woman. And if Van Hollen wins, the takeaway might be that this element of the race trumped the ideological component.

The contest has been close, although Van Hollen seems to have built a lead in the final stretch, according to polls. If Tuesday’s vote bears out those surveys, it will fulfill the long-expected script for the race. Throughout most of the campaign, the 57-year-old Van Hollen has been the front-runner. He was the first to enter the race last March and quickly locked up the support of most Democratic Party leaders in the state, much as Clinton did on a national level.

The son of a former ambassador, Van Hollen started his career as a US Senate staffer, won a seat in the Maryland legislature in 1990, and was elected to Congress in 2002. With a penchant for handling complicated policy questions, such as budget fights, he soon became part of the party’s leadership circles, serving as an assistant to House Speaker Nancy Pelosi. In many of the budget and debt ceiling battles pitting the White House against the tea party Republicans during the Obama years, he has been a key player for the Democrats. He also helmed the Democratic Congressional Campaign Committee, the party’s campaign arm for House races, and he built connections in the national donor class. In the Senate campaign, Van Hollen has raised more than $8 million, compared with just $3.3 million Edwards has gathered.

On the campaign trail,  Van Hollen has echoed Clinton. At a debate in Silver Spring two weeks ago, when asked how he would define progressivism, he said, “I believe that being progressive is about more than just saying the right things. It’s about being in the trenches and delivering progressive results.” Compare that to Clinton’s frequent line that she’s a “progressive who gets things done.”

During a phone interview last week, Van Hollen repeatedly directed the conversation to the various policy papers he’s introduced over the years, on subjects ranging from Wall Street reform to local projects in his Maryland district. “I’ve always been in the view that it’s not enough to simply cast a vote,” he said. “You can have people in Congress who push the green button for ‘yes’ and the red button for ‘no,’ they can talk about the issues, but there’s a big difference between that and actually rolling up your sleeves and legislating.”

Rather than a clash of ideologies, the Maryland race has become partly a battle of identity politics.

As a congressman, Van Hollen has shown a talent for wading into the policy minutia on a number of topics. In recent years, he’s proposed a financial transaction tax to pay for tax breaks for middle-class and low-income Americans and a cap-and-dividend bill to address climate change. It’s easy to see why he’s become a liberal favorite in the world of Washington think tanks and advocacy groups.

Still, Edwards has mounted a formidable challenge. She’s built a national following of progressive friends who have boosted her campaign. Groups like the Progressive Change Campaign Committee and Democracy for America instantly joined her campaign. EMILY’s List, the national group dedicated to electing pro-choice female candidates, has helped Edwards cut into Van Hollen’s fundraising edge, with the group’s super-PAC spending more than $2.4 million to boost Edwards.

Edwards also has a long resume in politics, though mostly from an outsider’s vantage. She started her career at Lockheed Martin as a technical writer for the company’s space program and eventually became a systems engineer for Spacelab, a laboratory designed to fit into the bay of a NASA space shuttle. But when the national appetite for space exploration waned following the Challenger explosion, she went to law school. She subsequently served as a lobbyist at the Ralph Nader-founded Public Citizen and as executive director of two progressive organizations, the Center for a New Democracy and the Arca Foundation. In the early 1990s, she co-founded the National Network to End Domestic Violence and helped push the Violence Against Women Act through Congress.

In 2006, Edwards challenged an incumbent, moderate Democratic congressman named Albert Wynn in the Maryland suburbs of Washington, DC, claiming he was in the pocket of special interests. She lost that race, but defeated Wynn in 2008. She entered the House in an uncomfortable fashion. “It starts out as a much more complicated relationship when you challenge the conventional party structure—both in your state and, by extension, coming into Congress, it’s a different relationship,” Edwards said in a recent interview with Mother Jones. Over the past six years, Edwards has slowly integrated herself into the party apparatus. She chairs the House’s subcommittee on space policy and has taken an active role in the Democratic Congressional Campaign Committee. But she remains something of an outsider, championing the party’s left flank as Sanders does in the Senate.

Edwards has depicted herself as a more relatable alternative to the polished politician she’s challenging. She frequently points to the fact that she was a working single mother for many years. Like Sanders, she’s proved adept at attracting media coverage, particularly in outlets with a younger audience. When the hosts of a popular podcast, Call Your Girlfriend, sold out a synagogue in DC earlier this month, Edwards stopped by for a brief, lighthearted interview. She’s been featured in the Lena Dunham-founded Lenny Letter and in Essence. Earlier this month, her byline appeared in Glamour, where she wrote about the need for equal pay.

Edwards sounds a lot like Sanders when she goes on the attack against Van Hollen. “I don’t take money from Wall Street banks, even though my opponent did,” she said in her first TV ad, released earlier this month. Throughout the campaign, she has needled Van Hollen for any hint of a deviance from liberal orthodoxy, sometimes stretching the truth about her opponent’s record to cast him as a sellout ready to cut any deal with Republicans. She’s criticized him for backing free trade (even though he opposes the Trans-Pacific Partnership deal) and for granting an exception to the National Rifle Association in a bill that would have required the disclosure of campaign contributions. (The bill, with the exception, had wide support from Democrats and the backing of President Barack Obama.) She’s consistently accused Van Hollen of being willing to cut Social Security benefits thanks to his past endorsement of using a compromise budget proposal as a basis for reaching a budget deal with Republicans.

That last attack clearly hit a nerve. When I asked Van Hollen about those claims and whether he regrets any of his past statements, he got defensive. “I’m not going to answer a question that could be misinterpreted in a way that could be used for misleading purposes,” he said, emphasizing that his public stance has always been that Social Security benefits should not be cut.

When discussing politics, Van Hollen and Edwards seem to disagree in the same way that Clinton and Sanders do. Van Hollen tends to be open to compromise in the interest of implementing progressive priorities. Edwards prefers to focus on defining a liberal agenda to ignite passion among voters. “If you’re always trying to shave part off to accommodate the right or the center-right, then you run the risk that people won’t know what you stand for,” she says.

Van Hollen is running even with Edwards or better among Sanders supporters.* The explanation may be that race and gender play as much of a role as ideology, if not a greater one. In the presidential race, Sanders has performed well among men and white voters. In this statewide contest, Van Hollen has held a large lead among white voters in public polls that break down the contest by race. In a recent Monmouth University poll, he led Edwards by a 57-point margin among white Marylanders and by 34 points among men. Edwards is running about even with Van Hollen among women, and she leads among black voters, 62-26 percent.

If Edwards wins, she would be only the second black woman to serve in the Senate, after former Sen. Carol Moseley Braun of Illinois. The Maryland Senate seat is open because incumbent Democrat Barbara Mikulski, the longest-serving female senator in history, is retiring. That’s one of the reasons EMILY’s List—one of the Clinton campaign’s closest allies—is investing so heavily in Edwards’ campaign. And Edwards’ supporters do point to her gender and race as selling points, noting the Senate could use more diversity. Some Democrats in the state have grumbled that Edwards has not been an effective member of Congress and has failed to provide good constituent services—charges the Edwards camp disputes as the grousing coming from those who don’t like the challenge she poses to the Democratic status quo. “It boggles my mind,” Edwards said, “that we could think that it’s appropriate for my voice to be absent from that conversation on behalf of people who share the same concerns that I do.”

But this is a contest that is chock-full of the various currents within Democratic circles: establishment versus insurgency, compromise versus idealism, and experience versus inspiration—and then throw race and gender into the mix. In some ways, it is a more complicated test than the Clinton-Sanders duel. No doubt, the result will fuel a variety of interpretations about the present and future of the Democratic Party.

This article has been updated to clarify Van Hollen’s standing among Sanders supporters.