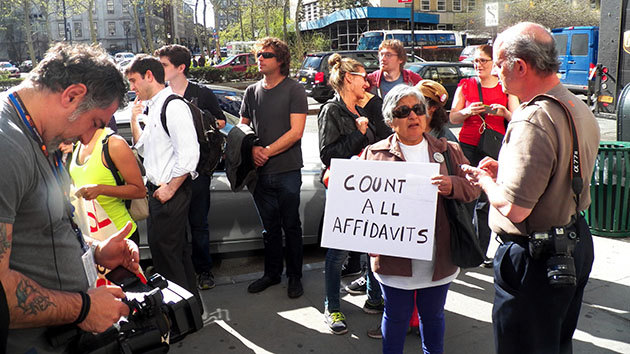 The first head has rolled after more than 100,000 voters were mistakenly purged from the Brooklyn voter rolls ahead of this week’s New York primary, which handed Hillary Clinton a much-needed win over Vermont Sen. Bernie Sanders. Diane Haslett-Rudiano, the chief clerk of the New York Board of Elections, was suspended “without pay, effective immediately, pending an internal investigation into the administration of the voter rolls in the Borough of Brooklyn,” the agency said in a statement, according to the New York Daily News.

Anonymous city elections officials said Haslett-Rudiano, who was in charge of the city’s Republican voter rolls, had been “scapegoated,” according to the New York Post. “It sounds like they cut a deal to make the Republican the scapegoat and protect Betty Ann,” an anonymous Democratic elected official from Brooklyn told the Post, referring to Betty Ann Canizio, who was in charge of the Democratic voter rolls.

On the day of the primary, New York City Mayor Bill DeBlasio, a Clinton supporter, said he’d heard reports of the “purging of entire buildings and blocks of voters from the voting lists.” He said, “The perception that numerous voters may have been disenfranchised undermines the integrity of the entire electoral process.”

The voter purge was just one of several problems with the primary throughout the city. Voters also reported long lines, poll locations that didn’t open, and, in one case, an elections worker sleeping on the job.

According to the Daily News, Haslett-Rudiano was in charge of maintaining accurate voter registration lists, a job that includes updating party registration information and removing the names of people who’ve died or moved. That process had fallen six months to a year behind schedule, according to WNYC, which reported the day before the primary that 60,000 Democrats had been removed from the polls in Brooklyn. That number later doubled after the Board of Elections followed up on the WNYC story.

New York City Comptroller Scott M. Stringer has opened an investigation into the matter, and New York State Attorney General Eric Schneiderman announced that his office had received more than 1,000 complaints about the election and would also look into “alleged improprieties” by the New York City Board of Elections. Scheiderman’s statement noted that he would expand his investigation to other areas of the state if warranted. On Friday, an official in Schneiderman’s press office told Mother Jones that there had been reports of issues in other parts of the state, but that for now the investigation was limited to the New York City area.

“Voting is the cornerstone of our democracy, and if any New Yorker was illegally prevented from voting, I will do everything in my power to make their vote count and ensure that it never happens again,” Schneiderman said.

According to the Daily News, Haslett-Rudiano skipped a step in the process of purging people from the list, which led to some people being improperly removed. Many voters reported being registered as Democrats, only to find that their affiliation had been changed from Democrat to unaffiliated. That meant they couldn’t vote in New York’s closed primary election, which requires an official registration with one of the major parties.

This isn’t the first time Haslett-Rudiano has made headlines. According to the Daily News, a building she owned on the Upper West Side of Manhattan was the subject of more than 20 Department of Buildings violations over the years after she’d let it fall into disrepair. The building, which she reportedly bought for $5,000 in 1976, was sold in 2014 for $6.6 million.

New York State Board of Elections spokesman Thomas Connolly told Think Progress that each complaint he’d followed up on had been due to a mistake on the voter’s part. “I’ve yet to come across [a voter registration] that’s been maliciously changed,” he said. “There’s always been a legitimate reason.”

Election Justice USA, a national organization formed after the botched Arizona elections on March 22, tried to help voters whose affiliations had been switched without their knowledge by filing a lawsuit to make the primaries open to any registered voter. A judge dismissed that request on Tuesday, but the group hasn’t given up. Shyla Nelson, a co-founder of the organization, said there is an ongoing lawsuit seeking a review of all the provisional ballots submitted by voters who reported being removed from the rolls against their will. The group is also seeking to have provisional ballots (sometimes referred to as “affidavit ballots” in New York) counted before the state certifies its primary results on May 5.

Nelson told Mother Jones that an evidentiary hearing will be held in the case on April 29. The group is nonpartisan, said Nelson, who noted that there are Republicans among the 700-plus reports of election troubles the group has collected. She added that until there’s a full understanding of improperly disqualified ballots, the results of the election are in doubt.

“If that had not happened, would that have changed the outcome of the election?” she asked. “It may have. And so long as that’s out there as a question, I think we’re looking at some deep fundamental questions about how we conduct our elections systematically, and what it is that we need to do to ensure that we’re not left with so severe a level of doubt in that process.”