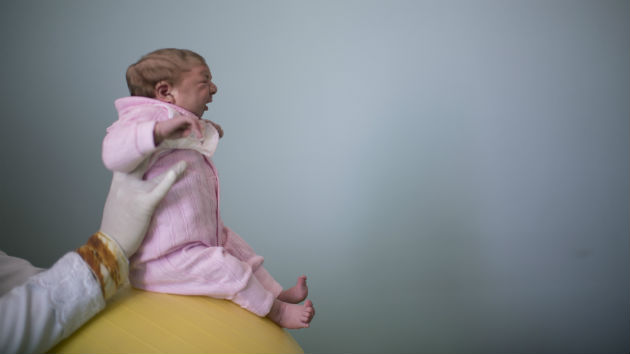 As the Zika virus travels north from Latin America, public health experts are paying particular attention to pregnant women. That’s because, even though the virus causes just minor, flu-like symptoms in most adults, it’s also been linked to microcephaly, a rare prenatal disorder that prevents fetus’ brains from fully developing and can cause severe developmental and neurological symptoms.

In response to the incomplete but mounting evidence linking Zika and microcephaly, the Centers for Disease Control and Prevention, which on Friday is hosting a summit for governors and local officials to plan for the virus, called on pregnant women to avoid traveling to Zika-infected areas, to avoid mosquito bites, and to use condoms “the right way, every time.” The other option is to stay abstinent during pregnancy.

In January, the issue of access to family planning and abortion services came up in Latin America after local governments warned that women should avoid getting pregnant for two years so they don’t risk exposing their fetus to the virus. As Mother Jones previously reported, those unprecedented directives were largely impossible to follow, because women in the area have little access to family planning services and no abortion options.

But if there should be a Zika epidemic in the United States, how prepared are we to help pregnant women? Here’s everything you need to know about Zika and access to reproductive health services.

A Zika epidemic in the United States won’t happen until the summer. Twenty countries have reported transmission of the virus, which is passed between people primarily through the Aedes aegypti, the same mosquito responsible for dengue and yellow fever. More than 310 cases of Zika have already been reported in the United States, not including territories, but so far the virus has not been transmitted between people by the mosquito—they’re almost entirely travel-related cases, meaning the person was exposed while traveling in an infected area. Of the cases reported here, 27 were pregnant women. It’s unclear to what extent Zika will spread, but any nationwide epidemic won’t happen until mosquito season, when the Aedes come up for the warm weather. By July, temperatures will be hot enough for Zika to spread through large swaths of the country, according to a recent study by scientists at the National Center for Atmospheric Research. Florida, Texas, and Hawaii will likely be hit the hardest, according to the CDC, though the mosquitos will also be present up the East Coast to New York, as well as in the South and Southwest, and in California. The Midwest will probably be the region that is affected the least.

The states projected to be hardest hit by Zika also lack family planning resources. The CDC’s efforts to combat Zika have dually focused on mosquito control and the protection of pregnant women. The agency has asked that states prepare for the virus by advising pregnant women, or women trying to become pregnant, to postpone travel and use condoms. But of the three states with the most reported cases of Zika so far—Florida, New York, and Texas, in that order—only in New York does sexual health figure prominently in the government’s response. New York state is making 20,000 kits, which include insect repellent as well as condoms, available for pregnant women. By contrast, preventing transmission to pregnant women figures much less prominently on the Texas and Florida health department websites. It’s probably not a coincidence that access to family planning services is actually decreasing in Texas and Florida, where both states have blocked public funding to Planned Parenthood. In Florida in 2010 (the most recent data), 59 percent of pregnancies were unintended, more than 10 percent higher than the national rate. Fifty-four percent of pregnancies were unplanned in Texas that year.

Most women with microcephaly diagnoses won’t be able to get an abortion. According to the CDC, fetal ultrasound is the best way to test for abnormalities such as microcephaly. If a pregnant woman whose fetus has microcephaly decides to terminate her pregnancy, she probably won’t be able to get an abortion because of restrictive abortion laws. Only a few states, including North Dakota and most recently Indiana, ban abortion in cases of genetic abnormalities like Down syndrome or microcephaly. But the vast majority of states ban abortion starting at the end of the second trimester. Twelve states outlaw abortion after 20 weeks, three states ban the procedure after the third trimester (27 weeks), and the rest ban abortion around viability, or 24 weeks. Some states do permit later abortions in cases of fetal anomaly, but in all but one of those states the anomaly must be lethal. Because testing for the disorder doesn’t happen until 18 weeks gestation, at the earliest, and symptoms typically won’t show up until the end of the second trimester, at around 24 weeks, or even the beginning of the third trimester, women waiting for a diagnosis of microcephaly end up either outside the window for legal abortions or bumping up right against it.

“We’ve realized that being able to identify abnormalities early in pregnancy is quite critical,” says Neil S. Silverman, a physician and professor in the division of maternal-fetal medicine at UCLA and a member of the American Congress of Obstetricians and Gynecologists. “If we diagnose the woman with an abnormal fetal brain at 22 weeks, it’s not helpful because she won’t have the full range of options available to her.”

Earlier abortions might not make sense, either. Most people infected with Zika will never experience symptoms and so won’t know they have the virus at all. A pregnant woman who realizes she’s been exposed to the virus could get a blood test to determine whether she caught it, but even in those cases, the connection between Zika infection and microcephaly leaves room for some doubt. A recent study published in the New England Journal of Medicine tracked the pregnancies of Brazilian women infected with Zika and found that less than a third were diagnosed in utero with fetal anomalies.

States are hurting efforts to increase scientific understanding of the virus and its effects on pregnancy. As part of the effort to come down hard on Planned Parenthood following the release of the misleading and selectively edited videos last summer, lawmakers in 18 states are pushing through legislation to block fetal tissue research, though it’s crucial in understanding disorders like microcephaly. Florida became the latest state to restrict fetal tissue research when on Friday Gov. Rick Scott signed a bill that prohibits the donation of aborted tissue.

“Most of the information we’ve been able to establish on the link between Zika and brain abnormalities has been from research with fetal brain tissue,” Dr. Silverman says. “The availability of fetal tissue is critical in making earlier diagnoses and in allowing us to counsel patients based on data rather than conjecture.”

In the past, illegal abortions have been permitted during public health epidemics. The growing Zika epidemic and the questions it has raised over access to abortion services has strong parallels to an outbreak of rubella in the United States 50 years ago. Like Zika, an epidemic of rubella in the 1960s caused only minor symptoms in adults but also resulted in serious congenital defects, including deafness, blindness, heart problems, and microcephaly. Abortion was still illegal at the time, but according to the CDC, cases of rubella resulted in 11,250 abortions. Life magazine put the story of Dolores Stonebreaker, a Roman Catholic who got an abortion after a rubella diagnosis, on its cover in 1965. The rubella issue was widely seen as changing the conversation around abortion in the United States and elsewhere.