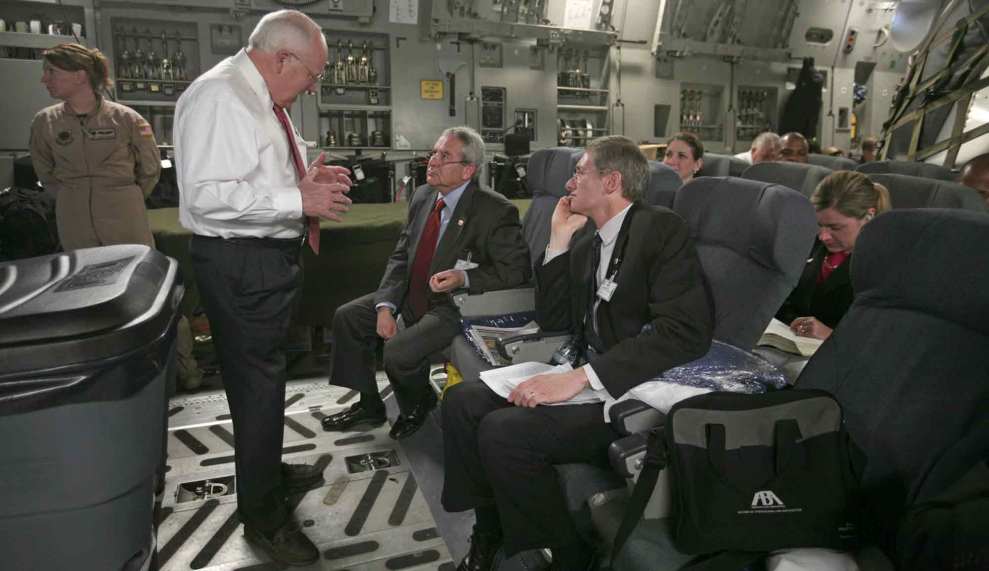 After the New York Times‘ much-discussed profile of White House national security aide Ben Rhodes hit computer screens all across Washington recently, Republicans howled about the revelation that Rhodes boasted of having created an “echo chamber” of experts and journalists to support the Iran nuclear deal. House Speaker Paul Ryan accused the Obama administration of having “essentially misled the American people.” Rhodes countered that the White House had merely crafted a “concerted effort” to win backing for the accord by pushing out “the facts of the deal.” Still, Republicans proclaimed yet another Obama scandal, and Rep. Jason Chaffetz (R-Utah), the chair of the House Committee on Oversight and Government Reform, rushed to hold a hearing entitled “White House Narratives on the Iran Nuclear Deal.”

It might be worth exploring how the White House communicated information about the Iran nuclear agreement, but here’s the tell that this endeavor is not a serious, nonpartisan, on-the-level project: Chaffetz has invited John Hannah to be a witness at the hearing, scheduled for Tuesday. He’s a senior official at the Foundation for Defense of Democracies, a neoconish outfit that opposed the Iran deal. But more relevant—or awkward—he’s a former aide to Vice President Dick Cheney who was deeply involved in the Bush-Cheney administration’s use of bogus intelligence to sell the Iraq War.

In 2002, as hawks and neocons were angling to launch a war against Saddam Hussein and trying to generate a case to justify an attack, Hannah, then an aide in Vice President Cheney’s office, was a contact person in the White House receiving false intelligence on Iraq’s supposed weapons of mass destruction from the Iraqi National Congress, an exile group led by Ahmad Chalabi that was trying to encourage US military action against Iraq. As Knight Ridder subsequently reported, “The Bush administration relied on some of the information from the Iraqi National Congress to argue that Saddam Hussein had to be ousted before he could give banned biological or chemical weapons to al-Qaida for strikes on the United States.” And the news service noted that a 2002 letter from the INC to congressional staffers identified Hannah “as the White House recipient of information gathered by the group through a U.S.-funded effort called the Information Collection Program.”

So Hannah was a funnel for phony intelligence. But that’s not all.

In the 2006 book I co-wrote with Michael Isikoff, Hubris: The Inside Story of Spin, Scandal, and the Selling of the Iraq War, we reported that when the Bush-Cheney crowd came into office, Hannah was one of the leading champions of Chalabi, the conniving leader of the INC who died last year. Hannah was also at that time a supporter of an eccentric academic named Laurie Mylroie who had developed the bizarre conspiracy theory that Saddam Hussein, not Islamic extremists such as Al Qaeda, was responsible for most of the world’s anti-United States terrorism. This was a notion discredited by the US intelligence community but embraced by neocons searching for reasons to go to war against the Iraqi dictator.

And Hannah was one of the architects of the speech then-Secretary of State Colin Powell gave to the United Nations in February 2003 that was designed to pave the way to war. The first draft of that speech had come out of Cheney’s office and was referred to as the “Libby draft,” named after Cheney’s chief of staff, Scooter Libby (who would later be found guilty of lying to federal investigators and sentenced to 30 months in prison, though his sentence was subsequently commuted by Bush). In meetings prior to Powell’s UN appearance, Powell’s chief of staff, Larry Wilkerson, challenged many of the allegations within the Libby draft, and Hannah tried to defend the material. Wilkerson later told Isikoff and me, “Hannah was constantly flipping through his clipboard, trying to source and verify all the statements…It was clear the thing was put together by cherry-picking everything from the New York Times to the DIA.” The closer Wilkerson and other State Department aides looked at the draft, the more they found the allegations to be based on unconfirmed and iffy source material. Much of the information, Wilkerson concluded, had come from the INC. Eventually, the draft Hannah was defending was tossed aside. Instead, Powell’s speech would be based on a national intelligence estimate. (This NIE was also predicated on flawed intelligence, but the allegations were less outlandish than those in the Libby draft.)

Of course, most of the Powell speech turned out to be bunk. Had Libby and Hannah prevailed, it would have been even bunkier. Still, Powell’s speech had the intended result: It helped sway public and pundit opinion in favor of the war. Team Cheney, with Hannah a key player, had driven the agenda and helped peddle a hoax—Saddam was neck-deep in WMDs and in cahoots with Al Qaeda—to sell a war. (By the way, in 2007, Hannah, still part of Cheney’s posse, was pushing for a US war with Iran.)

So maybe Hannah does have experience in how a White House tries to create and promote a narrative. But in his case, it was a false narrative. Will he be testifying about that?