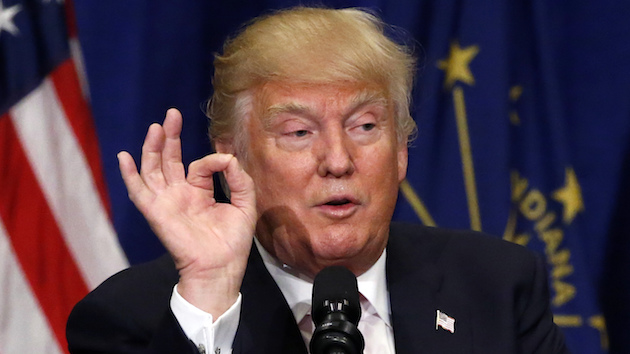 Donald Trump may not have the keys to the nuclear arsenal quite yet, but his all-but-guaranteed nomination, sealed with a landslide victory in the Indiana Republican primary on Tuesday, means the intelligence community must soon start briefing the presumptive GOP nominee and giving him access to classified security information.

Notable tidbit: Trump told WaPo that he is eager to start receiving regular classified intelligence briefings from the U.S. government

“We have already established a plan for briefing both candidates when they are named,” said James Clapper, the director of national intelligence, at a breakfast hosted by the Christian Science Monitor last week. “We already have a team set up to do that and a designated lead.” While Trump and Hillary Clinton are nearly certain to become their parties’ nominees, Clapper’s office confirmed that intelligence briefings would not begin until the Republican and Democratic candidates are formally nominated in July.

Candidates first started receiving intelligence briefings during the 1952 election, on the orders of President Harry Truman, and the practice has continued during every presidential election since. Once conducted by the CIA, the briefings are now handled by the Office of the Director of National Intelligence, or ODNI, which was established in 2005. The ODNI wouldn’t provide any other details about the process, including who carries out the briefings or what level of classified material the candidates are allowed to hear about. Clapper said during the breakfast that the briefing team tries to ensure that each candidate receives the same information.

The briefings are supposed to give the next potential commander in chief the best possible national security outlook. But there’s a balancing act between the information the candidates need to receive and the amount of material the outgoing president, who has ultimate control over the information in the briefings, is willing to reveal. In Getting to Know the President, a CIA-published book about the history of presidential candidate briefings, former CIA Inspector General John Helgerson described how the Clinton administration restricted information given to then-Gov. George W. Bush. “Don’t tell him anything sensitive,” Sandy Berger, the national security adviser at the time, reportedly told CIA Deputy Director John McLaughlin. Helgerson wrote that this was the case for “a great many transitions, with the outgoing administration not sure which candidate would accede to office and thus very protective of sensitive and classified information.”

That may be especially true now that Trump is likely to be the Republican nominee. Trump has displayed both an ignorance of military and foreign affairs—at one debate he appeared to have no idea what the nuclear triad was—and a willingness to endorse positions wildly out of the foreign policy mainstream, including resuming waterboarding and targeting the families of terrorist suspects. He has also floated the idea of withdrawing from NATO and ending other longtime alliances unless our allies reimburse the United States for military costs. Sitting officials, including the director of the CIA and the chairman of the Joint Chiefs of Staff, have publicly spoken out against Trump’s proposed policies, and a recent Huffington Post article described panic among current and former military officers at the prospect of a Trump presidency.

Between that and Trump’s penchant for speaking off the cuff, President Barack Obama and his national security team may think long and hard about giving the presumptive GOP nominee access to anything but the bare minimum. As a former senior intelligence official told the Daily Beast, “It’s not an unreasonable concern that he’ll talk publicly about what’s supposed to stay in that room.”