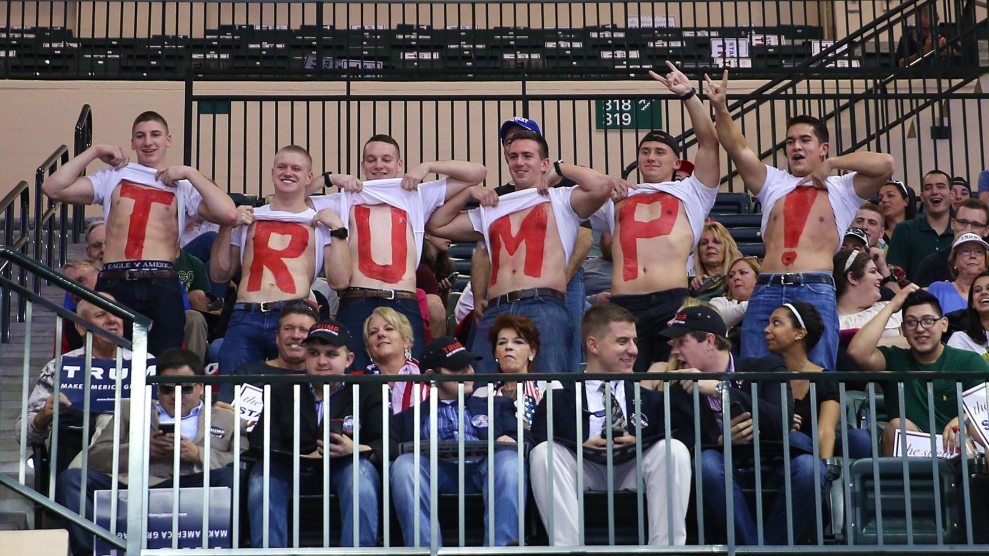 At a Trump campaign rally last week in Spokane, Washington, Donald Trump slammed Hillary Clinton for “playing the women’s card” to gain campaign support. When citing Clinton’s criticisms of him, Trump mimicked the candidate, straightening his shoulders and flattening his voice to convey a cold, prim demeanor. He concluded the performance with the pronouncement: “All of the men, we’re petrified to speak to women anymore…You know what? The women get it better than we do, folks. They get it better than we do.”

The audience erupted into cheers and applause.

Moments like this one—where Trump’s unabashed political incorrectness and machismo are on display—resonate with many of his supporters. But his message in Spokane made headlines in part because the notion that men have it worse off than women echoes a central tenet of the Men’s Rights Movement (MRM), a network of activists who believe that in many contexts, men are a disadvantaged class. New York magazine even offered its readers a quiz: “Who Said It, Trump or a Men’s Rights Activist?”

It seems like a no-brainer that men’s rights activists would admire Trump’s rhetoric on gender and thus support his candidacy for president. But several leaders of the movement who spoke to Mother Jones are ambivalent about Trump, at best—one has even donated to Clinton—and say that many others in their community haven’t been won over by Trump’s bluster. But why do many members of a group that would appear to be his natural constituency not support Trump for president?

“It’s nice to hear him say” things that align with the men’s rights movement, says Dean Esmay, now a contributor to and formerly the managing editor of A Voice for Men, a blog and men’s rights discussion hub, but those talking points aren’t enough. “Somebody had the guts to say that men have it tougher than women, it gives you an emotional rush,” he continues. “But when you listen, where’s the meat behind it? What’s he offering? I see nothing.” Trump isn’t offering much by way of policy substance, Esmay says, both on issues key to MRAs, such as incarceration or the treatment of fathers in family courts, or on others.

“Why do I think he would make a bad president?” asks Esmay. “Because he is a loose cannon. You don’t know what he’s going to do. We have a student loan debt bubble that’s going to burst. We have a middle class that’s imploding. And Donald Trump is going to fix it all by saying, ‘Believe it, baby?’ Give me a break.”

Warren Farrell, widely considered the father of the men’s right’s movement and the author of one of its foundational texts, The Myth of Male Power,  says he’s a “very strong supporter” of Clinton. He has attended several campaign events for Clinton and has donated the allowed maximum of $2,700 to her primary campaign. Still, Farrell says he thinks Clinton is “the worst candidate in recent history, in my lifetime, on gender issues from the perspective of understanding and having compassion for men.” But Farrell, who has a Ph.D. in political science, still supports Clinton in part because, he says, “even though I care about men’s issues a lot, I care about this country being led by the most competent person.”

“Trump is the quintessential example of the immature man and men at their worst.”

“Its very hard for me,” he continues, “because Trump does have a clue about what’s happening with men’s issues. But Trump is the quintessential example of the immature man and men at their worst.”

Farrell falls into a more liberal faction of the men’s rights community, says Gwyneth Williams, a professor of politics at Webster University who also studies men’s movements. But some of Farrell’s more conservative colleagues also have serious concerns about Trump.

“I think Trump was right on for saying that men are afraid of upsetting women,” says Paul Elam, the CEO and founder of A Voice for Men. But Elam notes that he doesn’t buy that Trump would be “some sort of savior for” the men’s rights movement, and that there are other Trump positions he finds especially worrisome.

“Trump talks a lot about building a wall and the outlandish proposition that he’s going to stop drugs from entering the country—which is impossible,” says Elam. He’s wary of a candidate who would further criminalize drugs, leading to greater incarceration of men. While Trump hasn’t directly promised this, New Jersey Gov. Chris Christie, one of Trump’s surrogates and a potential vice presidential pick, has said he supports the criminalization of marijuana use. That’s why both Elam and Esmay say the possibility that in a Trump administration Christie might be elevated to a position of power might push them to vote for Clinton.

But many men’s rights activists are definitely not Clinton fans: Both Elam and Esmay referred to her as a “lizard” while speaking with Mother Jones, and men’s rights forums on Reddit and elsewhere are filled with anti-Clinton sentiments. But despite their Clinton scorn, many MRAs say it’s obvious Trump is more swagger than substance. “Trump doesn’t have the ability to successfully call out Hillary on her sexism. He is to [sic] crass and doesn’t grasp the issues,” writes one user on the men’s rights subreddit. Another sums things up: “Trump VS Clinton. Whoever wins, America (and the world?) loses.”