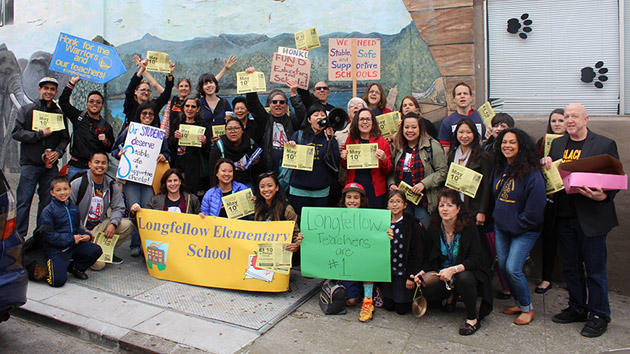 In nearly 75 cities across the country, students, parents, and teachers marched at their public schools on Wednesday, protesting inadequate funding and charter school takeover, issues that especially affect black and Latino students in urban areas.

The organization Alliance to Reclaim Our Schools is behind the “walk in” demonstrations, and it’s made up of large-scale organizations, such as teachers unions, and local community groups. The walk-ins began last spring and have doubled in size since February.

The alliance’s executive director, Keron Blair, said that when charter schools replace public schools, parents lose their ability to vote on school board members—something, he argues, that hurts society at large. “We have to invest in public education if we want to fortify our democratic society,” he said. “The two go hand in hand.”

Charter schools have exploded in popularity since the 1990s; data shows that today nearly 5 percent of all public school students attend one. Charters receive funding that many educators feel should go only toward traditional public schools.

“People are seeing and hearing and saying, ‘We want to walk in,'” Blair said. “Resources are being pulled out of the public sector and privatized…The very people they’re supposed to help have no say,” Blair said.

Although the general theme of the walk-ins revolved around charter school takeovers, the demonstrations also allowed students and parents to voice their own local issues. Educators and parents from Oakland Unified School District in Oakland, California, protested an enrollment policy that has public schools and charters grouped together when parents sign up their kids for school; some parents and educators are concerned that the policy favors charter schools. Organizers from San Francisco Unified School District protested the rising cost of living that has pushed teachers out of a city where a two-bedroom apartment typically runs upward of $2,000 per month.

“The affordability crisis in San Francisco is raging out of control and turnover is happening at a breakneck pace,” said Matthew Hardy, the communications manager for Unified Educators of San Francisco. “This is pushing too many educators out of the city and out of the school system.”

For Detroit, a city continually plagued by public-education budget battles, Wednesday’s walk-in came on the tail end of more teacher “sick outs” earlier this week. Since it is illegal to strike in Michigan, frustrated educators have been using their sick days to protest unpaid work days. Education advocacy groups like 482 Forward, a citywide education organizing network, used the national momentum against charters to present a list of demands that include manageable class sizes and more multicultural curricula. Nearly 84 percent of the public school student population in Detroit is African American.

“There’s not a lot in the curriculum where kids can self-identify,” said Wytrice Harris, a parent and school activist. “It doesn’t reflect the lives that they see every day.”

Keron Blair of the Alliance to Reclaim Our Schools said small changes are being seen across the country and that the organization will plan more walk-ins for the fall of the coming school year.