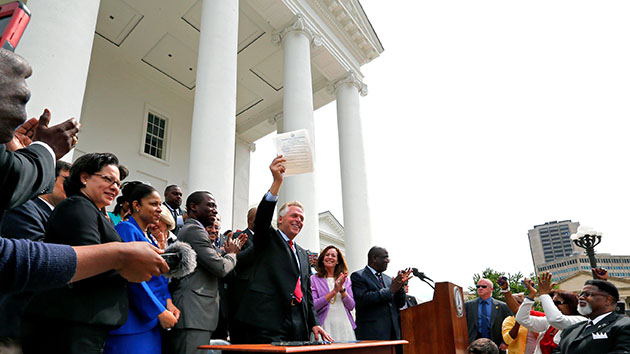 Gov. Terry McAuliffe holds up the order he signed to restore rights to more than 200,000 felons in Virginia at the capitol in Richmond on April 22. Mark Gormus/AP

House and Senate Republicans in Virginia announced Monday that the GOP would sue to block Gov. Terry McAuliffe’s restoration of voting rights for more than 200,000 felons in time for the November election.

McAuliffe, a Democrat and longtime friend of and fundraiser for Bill and Hillary Clinton, used an executive action on April 22 to restore voting rights for felons who had served their sentences and completed their parole or probation as of that date. “There’s no question that we’ve had a horrible history in voting rights as it relates to African Americans—we should remedy it,” the governor told the New York Times when he announced the decision. The paper noted that the decision would have a major impact in a potential swing state this November, as many of the felons are African Americans who are “a core constituency of Democrats.”

The governor estimated his actions would apply to 206,000 people and said he instructed state officials to prepare similar monthly orders that would apply to felons who would qualify to vote after the original April 22 cutoff date. In a statement issued Monday, Brian Coy, McAuliffe’s communications director, said the governor was acting on his “constitutional authority” when he issued his executive order.

“The Governor is disappointed that Republicans would go to such lengths to continue locking people who have served their time out of their democracy,” Coy said in the statement provided to Mother Jones. “While Republicans may have found a Washington lawyer for their political lawsuit, they still have yet to articulate any specific constitutional objections … These Virginians are qualified to vote and they deserve a voice, not more partisan schemes to disenfranchise them.”

Republicans in the state legislature said Monday they will not use taxpayer money to fund the lawsuit they say is necessary to fight McAuliffe’s executive order.

“Governor McAuliffe’s flagrant disregard for the Constitution of Virginia and the rule of law must not go unchecked,” Virginia Senate Majority Leader Thomas K. Norment, Jr. said in a statement. “His predecessors and previous attorneys general examined this issue and consistently concluded Virginia’s governor does not have the power to issue blanket restorations. By doing so now with the acknowledged goal of affecting the November election, he has overstepped the bounds of his authority and the constitutional limits on executive powers.”

The Times noted in a separate piece that the impact of McAuliffe’s decision could be pivotal in a close election—President Barack Obama won the state by 149,000 votes in 2012—but not as significant as one might imagine. “Ex-felons are disproportionately young and less educated, the two most powerful demographic predictors of low voter turnout in the United States,” the paper wrote.

Nearly every state—with the exception of Maine and Vermont—has restrictions on the voting rights of felons. Virginia’s restrictions have been in place since after the Civil War, when the state’s constitution permanently barred former felons from being able to vote.

This piece has been updated to include a statement from McAuliffe’s office.