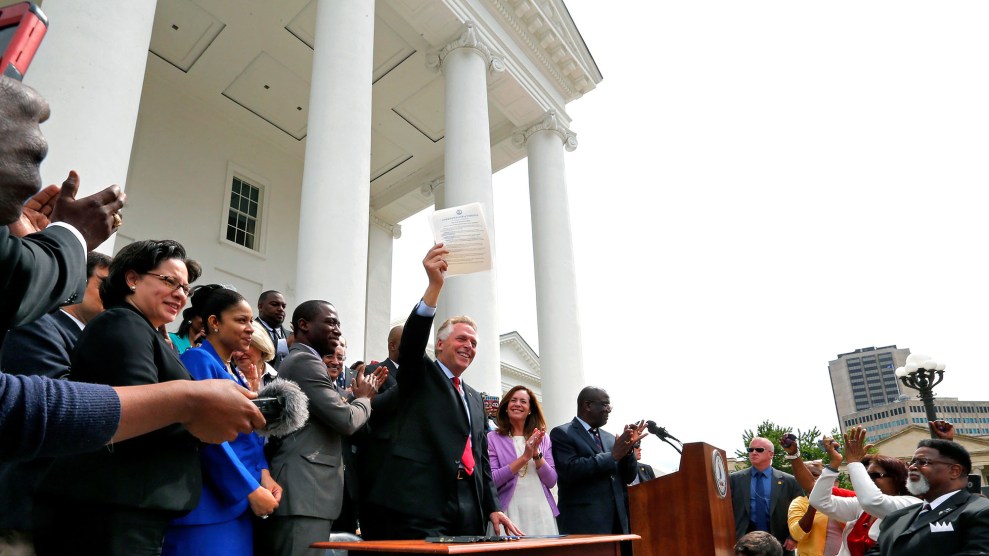 Gov. Terry McAuliffe holds up the order he signed to restore rights to felons in Virginia at the state Capitol in Richmond last month.Mark Gormus/AP

Virginia Republicans have followed through on their threat to sue Gov. Terry McAuliffe over his April 22 decision to restore the voting rights of more than 200,000 felons, filing suit on Monday with the state’s Supreme Court and alleging that the governor overstepped his authority.

“The Virginia constitution has a blanket prohibition on felons voting, but it gives the governor a narrow clemency power to restore voting rights or other political rights,” said Charles Cooper, the Washington, DC, lawyer hired by the state Republicans to challenge the decision. “But that power, we are arguing, can be exercised by the governor only on an individualized basis.” Cooper said McAuliffe’s two predecessors, Tim Kaine, a Democrat, and Bob McDonnell, a Republican, looked at voting restorations and concluded that the governor could only restore voting rights “case by case, rather than en masse and categorically, the way he has.” He added that “the imminence of the November elections, the importance of the issue, convinced us that we really ought to ask the Supreme Court to take it up immediately.”

McAuliffe said his office will fight the suit. “Today Republicans filed a lawsuit to preserve a policy of disenfranchisement that has been used intentionally to suppress the voices of qualified voters, particularly African Americans, for more than a century,” the governor said in a statement. “These individuals have served their time and are now living, raising families and paying taxes in our communities—this suit is an effort to continue to treat them as second-class citizens.”

McAuliffe’s order immediately gave convicted felons who had completed their sentences and probation or parole requirements the ability to register to vote, serve on a jury, run for office, and become a notary public. McAuliffe’s office released an analysis suggesting that nearly 80 percent of the felons affected by his order were convicted of nonviolent crimes, and that nearly half of the disenfranchised population is African American, even though that group represents less than 20 percent of the state’s entire population. (White felons make up 51.5 percent of the group.) Additionally, the average time since completion of parole or probation for the group is 11.1 years. McAuliffe’s office estimated that the decision would affect about 206,000 people. As of May 17, 3,933 of them had registered to vote.

One of them is Terry Garrett, 48, who registered after McAuliffe announced his decision. Sitting in an office of the Friends of Guest House in Alexandria, Virginia, an organization that helps nonviolent women transition back into society after incarceration, Garrett described getting a text message explaining the governor’s order.

“I was so excited,” she told Mother Jones last week, before the Republican lawsuit was announced. “I was running around my house like, ‘Oh my god, I can vote! I can vote!'” 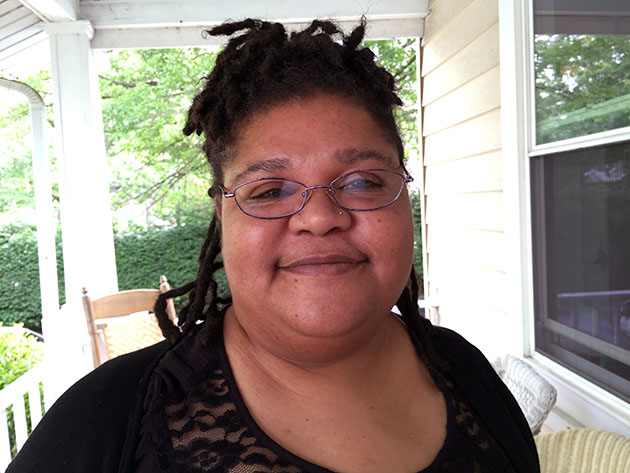 Garrett said it had been a long road from drug addiction and charges to her life today. She helps coordinate the Friends of Guest House Speakers Bureau, which talks to the community about issues related to prison reform and reentry. She said she’d be “devastated” if the right to vote were pulled away from her again. She was 18 when she first got mixed up with the law, and she tried to vote for Bill Clinton but was turned away because of her criminal record. Many state legislators have no idea what felons have been through, she said, and discount the hard work and effort it takes for someone with a troubled past to get her life in order.

Jennifer McDaniel, who works at a kennel and dog-grooming business, is another ex-felon with shoplifting charges and her own battles with addiction. She joined Garrett at Friends of Guest House to talk about getting the right to vote and said the governor’s action validated all her hard work to get straight.

“We have a voice, too; we have an opinion,” she said, adding that she pays taxes, has a job, and has paid her debt to society. “I follow the laws, so give me my damn rights.”

If the lawsuit succeeds, Garrett and McDaniel—and the nearly 4,000 additional felons granted the right to register to vote pursuant to the governor’s April 22 order—would be stripped of that right once again.

“If we’re right, the governor’s order did nothing to change their statuses,” Cooper said. “They remain unqualified under the constitution to vote.”

State Republicans said at the time that McAuliffe’s decision was an effort to help Hillary Clinton become president, a claim that might be hard to substantiate. Shortly after the decision, the New York Times noted that felons who have their rights restored tend to register as Democrats, but also tend to be younger and less educated, “the two most powerful demographic predictors of low voter turnout in the United States.” But given Virginia’s status as a swing state in this November’s presidential election, any advantage—perceived or otherwise—will be fought between the political parties.

A. E. Dick Howard, a professor of law at the University of Virginia School of Law, told the New York Times in April that the governor had “ample authority” to do what he did, but noted at the time that the move could be challenged based on the idea that the decision applies to an entire class of people.

The Republican Party of Virginia also released a statement on Monday. “Terry McAuliffe has proven time and time again that he is willing to abuse the powers of his office in his effort to elect Hillary Clinton,” party chairman John Whitbeck said in the statement. “No governor, regardless of party, has the power to re-write Virginia’s laws unilaterally.”

While Cooper says that this lawsuit is really about the governor’s authority, and that there are good people on both sides of the argument on felon voting rights, all Garrett and McDaniel see is partisan bickering. Both say that people who want to block felons who’ve served their time and probation want to silence them for fear of what they’ll say and how they’ll vote.

“They’re using this for keeping the poor from having a voice,” McDaniel said. Garrett agreed.