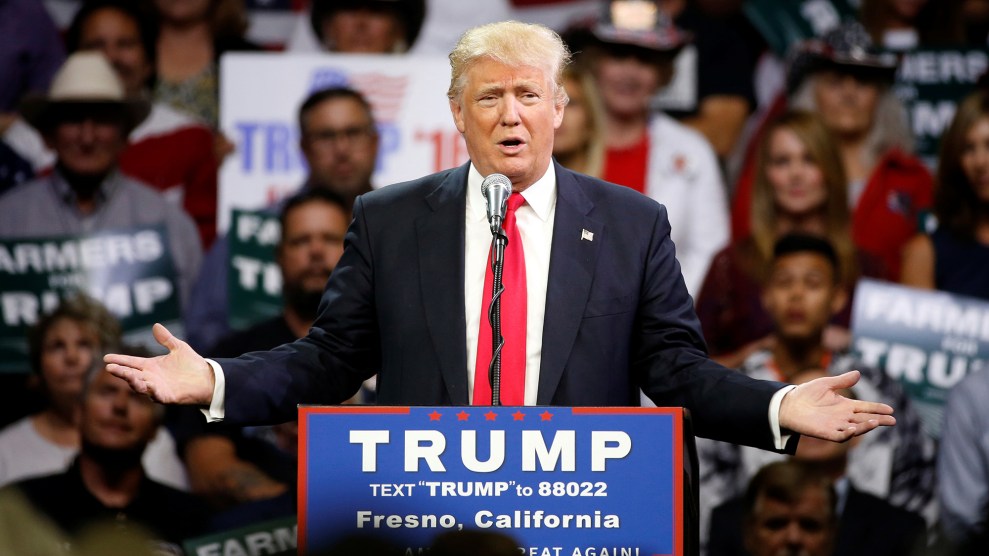 After weeks of desperate searching, Weekly Standard editor Bill Kristol has finally settled on his solution for thwarting Donald Trump: convincing National Review writer and attorney David French to run as an independent candidate. Kristol, one of the prime movers of the flagging #NeverTrump crowd, has been teasing for weeks that he would eventually find someone to carry the conservative banner against Trump and Hillary Clinton, and on Tuesday night Bloomberg‘s Mark Halperin reported that French was Kristol’s chosen savior. French is a veteran of the Iraq War and a hawkish voice that would appease Kristol’s concerns about Trump’s stance on foreign policy.

French soon jumped in on Twitter—and didn’t say no:

I’m incredibly humbled by and grateful for the many expressions of support — thank you.

Mitt Romney, whom Kristol had previously tried to recruit, offered his own Twitter endorsement: “I know David French to be an honorable, intelligent and patriotic person. I look forward to following what he has to say.”

But the new hope for conservatives and Republicans dissatisfied with Trump comes with a bit of baggage: He’s a longtime opponent of same-sex marriage and LGBT rights. His views might win over some social conservatives who are turned off by Trump’s past bursts of social liberalism, but French’s stances aren’t likely to endear him to a wider voting population. Last July, Slate‘s Mark Joseph Stern pointed out French’s pattern of “dehumanizing” gay people and described one of French’s columns as an “effort to persuade Americans that gay people are fundamentally immoral because they have gay sex.”

From his perch at National Review, French has regularly railed against gay rights. He objected when a court ruled that a Christian school couldn’t retract an employment offer to a teacher after the school learned that he was gay. He defended Christian adoption agencies that refused to place children with LGBT couples. He shook his head when people objected to the Boys Scouts allowing church-sponsored troops to exclude gay adults. “Liberalizing socially conservative organizations is a great way to shrink them to irrelevance,” he wrote. Since 2011, French has served as senior counsel at the American Center for Law and Justice, which has a long history of opposing LGBT equality.

Last year, French wrote that much like Barack Obama and Hillary Clinton, he had evolved on same-sex marriage. But that was a tongue-in-cheek remark. “In the not-so-distant past, I held a view that has since proven to be oppressive, a view of the law and culture that I now see as stifling the rights of others and damaging the fabric of our families and our democracy,” he wrote. “I supported same-sex marriage.” Turns out he had once said same-sex marriage wouldn’t matter much, given that in his view the definition of marriage had already been corrupted as too secular of an institution with no-fault divorce. Yet years later, he realized that he had been wrong and that gay marriage was the precursor to a cultural downfall. “[T]here is a concerted legal and cultural effort to not just carve out a legal space for same-sex couples,” he wrote, “but to essentially banish orthodox Christianity from public life—to treat it with the same respect that mainstream culture treats abhorrent ideologies like white supremacy.”

A few days after the Supreme Court legalized same-sex marriage nationwide in June 2015, French criticized churches that have adapted to the new cultural landscape and welcomed gay and lesbian congregates. He argued that the only way Christianity would survive would be continuing to stand against social change. “Sure, there will be a few individual congregations that thrive—at least for a time—by embracing all the social change the Left has to offer,” French wrote, “but at the end of the day, a church that conforms to the world is no church at all. It’s a social club that asks for money.”