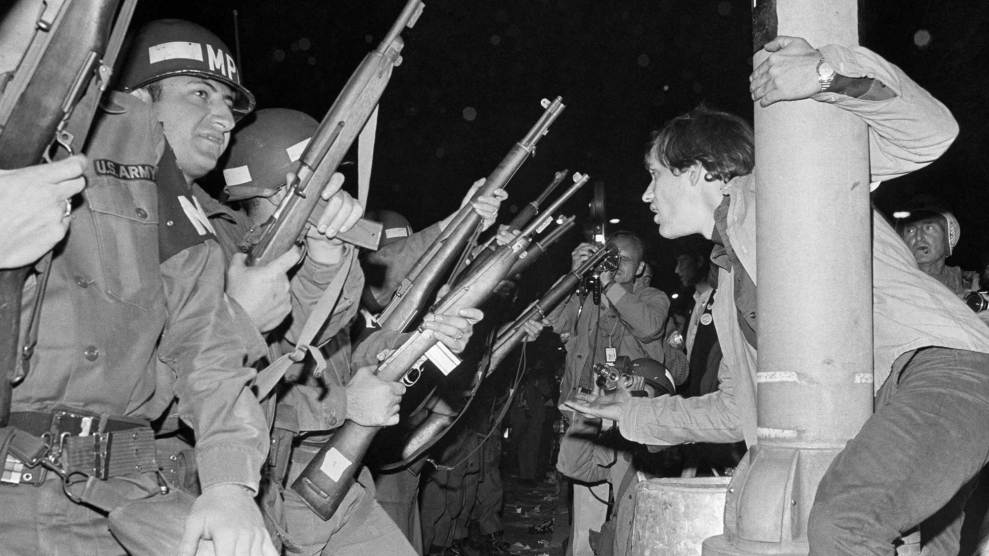 Donald Trump has a big idea for turning the final night of the GOP convention in Cleveland into a grand occasion: he will appear on stage at one of the city’s large sports stadiums to deliver his acceptance speech.

Other Republicans working on the convention are not so sure this should happen.

The Republican convention will be held in the Quicken Loans Arena, which Cleveland locals call the Q. It seats about 20,000. And according to Republican sources, Trump wants a bigger audience for his official coronation as the party’s nominee, scheduled for July 21. His campaign has asked the convention planners of the Republican National Committee to look into booking a stadium—either FirstEnergy Stadium, where the Cleveland Browns football team plays (73,000 capacity), or Progressive Field, the home of the Cleveland Indians baseball team (35,000 capacity). Such a denouement would be reminiscent of when then-Sen. Barack Obama accepted the Democratic Party’s nomination in 2008 on an ornate stage in Denver’s Invesco Field (also known as Mile High Stadium), in front of a crowd of 80,000 or so people. If Trump cannot top that, he seems to want to match it.

The Obama event was designed to showcase the excitement his historic nomination had generated. But a GOP spokesman at the time dismissed the move as merely “stagecraft and theatrics.” The Democratic Party invited Colorado residents to fill the seats at the event, and thousands flocked to the stadium to share the evening with the credentialed participants of the convention: the delegates, officials, and journalists, who in previous days had been conducting their business at the downtown Pepsi Center (20,000 capacity).

So Trump doing his version of a touchdown dance in the end zone would not be unprecedented. But there would be a large problem for the GOP this year, should it follow Obama’s lead. If Trump were to hold his coronation in one of these stadiums, he would have to open up the event to thousands of people not vetted for the convention. That means that a large number of potential protesters could attend. Maybe thousands. Given the conflict that has occurred at Trump campaign rallies, it is not hard to imagine what could happen in such a situation. “Chicago!” one GOP consultant exclaims, referring to the explosive protests that rocked the 1968 Democratic convention and shocked the world. “Only not outside the arena, but inside it.”

The security challenge for the Trump campaign and the GOP would be immense. How could it scrutinize attendees? During the primary season, the Trump campaign handed out tickets to his rallies to anyone who sought them via an online system. Reporters (including me) were barred from Trump events. Yet anyone in the general public could sign up for entry. And this is how banned reporters and protesters often have gained entrance to a Trump rally. There was no inspection process for these tickets.

Unless Trump wants to speak in a stadium with lots of empty seats—remember Marco Rubio’s problem?—his campaign will have to permit thousands of unscreened people to enter the venue. Security will be tight, but it will not be able to keep out anti-Trump protesters who will, no doubt, concoct various (and perhaps imaginative) ways to disrupt the proceedings. Trump rallies have often been marked by violence—either from his supporters who have assaulted peaceful protesters or from his detractors who have targeted Trump’s backers. The stakes—and the tensions—will be higher on the night Trump delivers his acceptance speech. (“I’m hired!”)

Will Trump and the Republicans go through with this? Most convention planning is designed with one goal in mind: avoid uncertainty and chaos. (Can you say Clint Eastwood?) Who knows how images of violence and bedlam at the GOP convention would affect the election? In 1968, Richard Nixon exploited the disorder at the Democratic convention as he campaigned on a platform of “law and order.” But if Trump is seen as a magnet for mayhem, that might not play well with independent voters and GOP moderates in the suburbs.

Imagine the internal debate: Trump the reality TV celebrity and showman wants a spectacular, big-league, and boffo event that outdoes what Obama pulled off, but the political professionals fret about the potential for disarray and disaster. How will this pan out? “The plan has been to hold the entire convention at the Q,” says Kirsten Kukowski, a spokeswoman for the Republican convention. “There have been discussions lately about possibly having an alternate venue for the last night but no news there.”