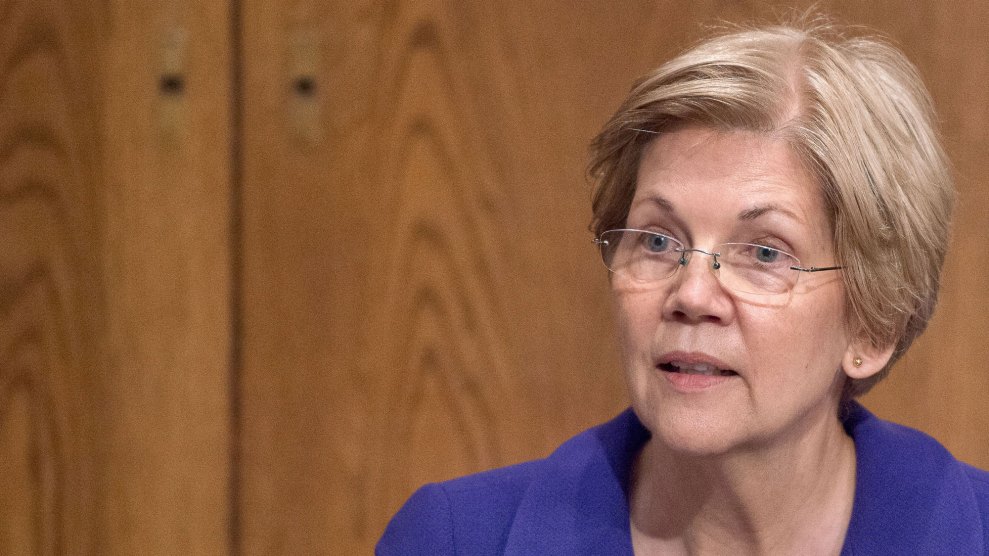 Fresh from her first appearance on the campaign trail with Hillary Clinton, Sen. Elizabeth Warren on Wednesday returned to her favorite activity: going after Wall Street. With Sen. Mark Warner (D-Va.) and Rep. Elijah Cummings (D-Md.), Warren submitted a bill aimed at strengthening regulation of the derivatives market, now notorious for its contribution to the financial crisis of 2007 and 2008. Derivatives are contracts whose value is derived from (and changes according to) the value of other assets, which allows parties in the contract to speculate, sometimes wildly, on the underlying asset’s value.

“The only way to make sure that derivatives can never lead to a financial crisis and taxpayer bailouts again is to put in place clearer rules and stronger oversight,” Warren said in a press release. A 2011 government report on the sources of the financial crisis found that a key role was played by so-called over-the-counter derivatives. The lack of regulation of these derivatives was the direct result of government policy: a bill passed in 2000—over the warnings of Commodity Futures Trading Commission (CFTC) chair Brooksley Born—that banned state and federal regulation of OTC derivatives.

This changed with the Dodd-Frank Act of 2010, which brought the OTC derivatives market under regulatory scrutiny. Warren’s bill, the Derivatives Oversight and Taxpayer Protection Act, now aims to build on that regulatory framework despite stiff opposition in the Republican-controlled Congress, where GOP lawmakers are working in the opposite direction. Rep. Jeb Hensarling (R-Texas), chairman of the House Financial Services Committee, proposed legislation earlier this month aimed at dismantling large portions of Dodd-Frank. Presumptive GOP nominee Donald Trump says he will dismantle Dodd-Frank if elected (although his statements have been short on detail).

A key provision in Warren’s proposal is aimed at increasing funding for the CFTC, which has seen its budget stagnate even as the markets it is supposed to monitor balloon. The agency has been complaining of inadequate funding for years: In 2013, former chairman Gary Gensler—now the Clinton campaign’s chief financial officer—told Bloomberg Businessweek that the agency needed “hundreds of more people to swim through all this data.” This April, the agency’s new chair, Timothy Massad, urged a Senate subcommittee to increase the budget allocation for his agency.

Warren’s bill would allow the commission to collect user fees from the financial firms that it monitors, much like the Securities and Exchange Commission does, and thereby escape the uncertainty of the appropriations process. President Barack Obama first proposed switching to this kind of structure in 2011, but Republicans in Congress have opposed the plan, claiming that the appropriations process keeps the commission accountable to lawmakers.

The measure also attempts to address another of Massad’s complaints: The fines the CFTC is permitted to levy are not large enough to discourage wrongdoing. It raises the civil penalty per individual to $1 million and the civil penalty for other entities to $10 million. (Fines could be larger depending on the size of a person’s monetary gain or the losses caused by their actions.) It also closes a key loophole that has allowed US banks to move billions of dollars in swaps offshore, out of the eyes of US regulators. If the bill comes to a vote, this provision would likely face opposition; according to a Reuters investigation, major banks lobbied heavily to obtain the loophole in the first place. Other provisions would bring certain foreign exchange swaps under the CFTC’s supervision and put an end to the preferential treatment of derivatives in bankruptcy proceedings—an arrangement that critics say encourages Wall Street firms to enter into risky contracts.

All of this may seem somewhat technical and arcane—but as Warren sees it, the alternative to reform is a repeat of the 2007-08 crisis. Without further regulation, she said, “big financial firms will be able to rake in billions when things go well, then come back to taxpayers with their hands out when things come crashing down.”