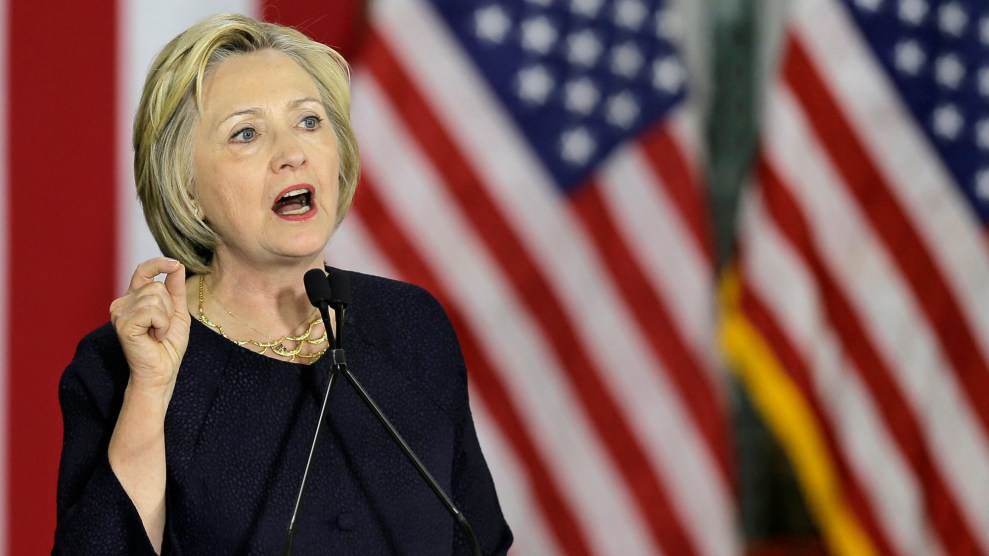 Hillary Clinton never mentioned Donald Trump’s name, but in her first speech since Sunday’s massacre at an Orlando gay club, Clinton sharply rebuked the anti-Muslim sentiment that has been at the center of his presidential campaign.

In a somber foreign policy speech in Cleveland on Monday, Clinton laid out a broad outline of her anti-terrorism strategy, one that mostly targets ISIS. “The attack in Orlando makes it even more clear: We cannot contain this threat, we must defeat it,” she said at a rally that had already been scheduled and was adjusted in the aftermath of Sunday’s events. Referring to the attacks in Paris and Brussels, as well as the one in Orlando, Clinton warned that the “threat is metastasizing.”

Clinton stressed that Muslim communities need to be treated as allies by law enforcement, because extra surveillance or profiling “plays right into the terrorists’ hands.” She noted that hate crimes against Muslims have increased after past terrorist attacks. She singled out Trump’s “inflammatory anti-Muslim rhetoric” and his call for a ban on Muslim immigrants, which Clinton said “hurts the vast majority of Muslims, who love freedom and hate terror.” With the threat of ISIS, she added, the country should be “strengthening our alliances, not weakening them or walking away from them,” a not-so-subtle rebuke of Trump’s penchant for dismissing the importance of NATO and other longstanding alliances.

When President George W. Bush responded to 9/11, she recalled, he reached out to the Muslim community, even visiting a mosque six days after the attack. “It is time to get back to those days,” she said, drawing another contrast to Trump, who reiterated his proposed travel ban over the weekend.

Clinton also used the speech to push for increased gun control, including reviving the ban on assault weapons that lapsed in 2004. “I believe weapons of war have no place on our streets,” she said, noting that the AR-15 rifle, which was used in Orlando, was also employed in the San Bernardino and Sandy Hook attacks. The presumptive Democratic nominee also pushed to bar individuals on the FBI watch list and the no-fly list from being able to purchase weapons. “If the FBI is watching you for suspected terrorist links,” she said, “you shouldn’t be able to just go buy a gun with no questions asked.”

Though the bulk of Clinton’s speech focused on the foreign policy implications of domestic terrorism, she did note that the attack in Orlando targeted the LGBT community. “To all the LGBT people grieving today: You have millions of allies who will always have your back,” Clinton said. “I am one of them.”