Mergers have become commonplace as hospital megachains increasingly dominate the American health care market. But those mergers often go unscrutinized by state regulators, who fail to address the resulting risks to patients losing access to care, according to a new report released today.

MergerWatch, which analyzes the hospital industry and opposes faith-based health care restrictions, surveyed health care statutes and regulations in all 50 states and the District of Columbia. It found that only 10 states require government review before hospital facilities and services can be shut down. Only eight states and DC mandate regulatory review when hospitals enter into more informal partnerships rather than full-scale mergers, closing a loophole that exists in other states for deals to pass with minimal state oversight.

Smaller, local hospitals often agree to merge with larger chains in order to survive. The goal is to cut overlapping services, negotiate better deals with insurance companies, and share in the cost savings. But without state protections, local residents can see health services disappear, sometimes without a chance to weigh in.

“In a number of states, there is no oversight at all.”

“In a number of states, there is no oversight at all. So hospitals are just doing what makes business sense for them,” says Lois Uttley, one of the report’s co-authors and the director of MergerWatch. “Someone needs to be looking out for the patients and the community.”

Sometimes the loss of services is ideological: As ProPublica and Mother Jones have reported, the expansion of Catholic hospitals in Washington State and Arizona led to restrictions on women’s health services and end-of-life counseling. Other times it’s just the bottom line: Expensive services such as pediatrics, obstetrics, and emergency room and neo-natal intensive care may be cut when a nonprofit hospital is taken over by a for-profit one, according to the report.

Even when state regulatory programs exist, they often fail to protect consumers from reductions in health care services. That’s because state oversight programs were largely written in the 1960s and ’70s, when hospitals were expanding and the main fear was duplication of facilities and services. Today, however, the opposite is happening: The number of hospitals in the United States has declined by about 240 over the past 15 years in the United States. Meanwhile, the country’s remaining hospitals are consolidating at a faster rate: 112 hospital deals were announced in 2015, which is a 70 percent increase from 2010, according to a recent analysis by Kaufman, Hall & Associates LLC, a management consulting firm.

Many state governments offer few avenues for consumers to express their concerns about proposed hospital deals. Just six states require a public hearing for every merger application under review, MergerWatch found. In the absence of public forums, grassroots battles against hospital mergers have been taking place across the country, driven largely by local residents only after health care services have been restricted.

Consider Arizona: In 2010, the Sierra Vista Regional Health Center partnered with the Carondelet Health Network, a Catholic system. Many residents of rural Sierra Vista only became aware of this after they discovered new restrictions on birth control, including tubal ligations and vasectomies, as well as on end-of-life options for the elderly.

“It happened before anybody had any input from the community,” Dotti Wellman, 77, a longtime Sierra Vista resident who helped organize protests against the partnership, told ProPublica. “I was very angry to think that families were going to be denied care. Quite honestly, if something happened to me, I didn’t want to go there.”

“It happened before anybody had any input from the community…if something happened to me, I didn’t want to go there.”

Bruce Silva, a gynecologist who was based at the health center, saw patients denied care, including a woman who needed an emergency abortion after miscarrying one of her 15-week-old twins. He describes the essential paradox of the situation: “What they felt was morally reprehensible was what I felt was the moral thing to do.” He explained that the nearest non-Catholic hospital was about 100 miles away and some patients in this rural area could not even afford the gas. “It was denying access to people who were poor,” he told ProPublica.

For several months, according to Wellman, she and a group of community residents—mostly elderly patients over the age of 60—picketed the hospital every weekday for around four hours. Some residents provided the state attorney general’s office sworn statements of their views. After a year, the health center decided to end its partnership with the Catholic system. 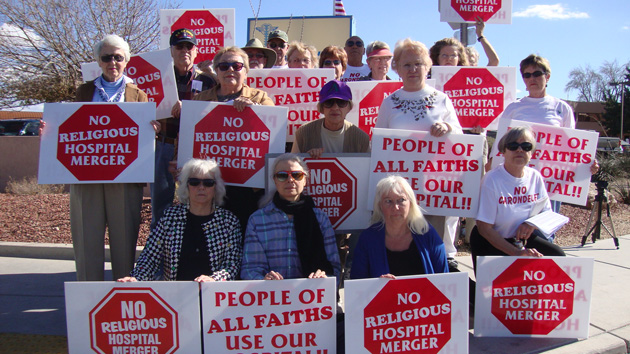 Many states do allow the state attorney general to review transactions when they involve nonprofit hospitals to ensure that their charitable status won’t be compromised. Some hospital mergers might also trigger antitrust review at the state or federal level, which aims to protect consumers (and their wallets) by making sure a single hospital system doesn’t gain monopoly-esque control over an entire area. Since November, the Federal Trade commission has challenged proposed hospital mergers in Pennsylvania, West Virginia, and Illinois.

Christine Khaikin, a co-author of the report, called MergerWatch’s work a “jumping off point” to “open the eyes of legislators and policymakers that the regulation of hospital transactions is not inherently bad. It can be used to the consumers’ advantage, and we’re hoping to start really engaging health care advocates in the states.”