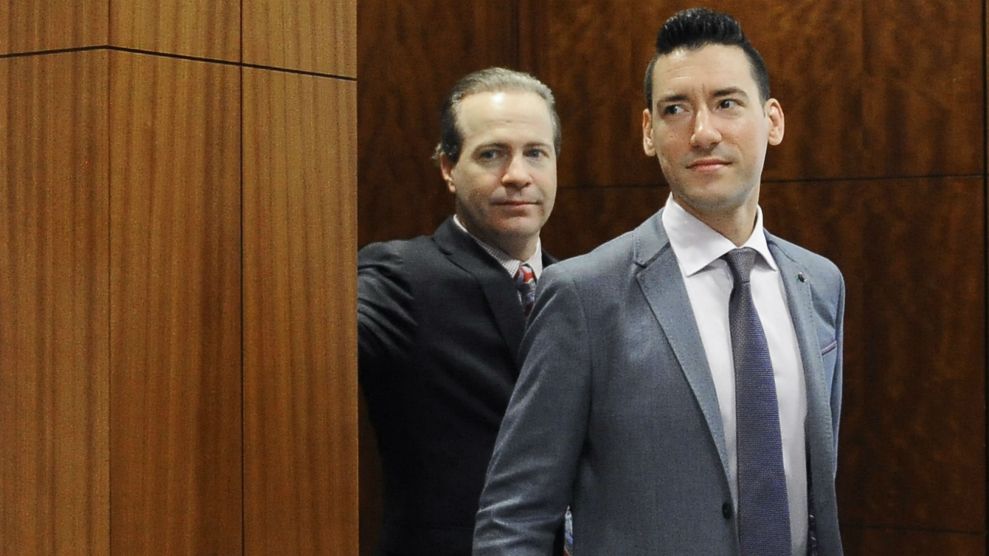 David Robert Daleiden, right, leaves a courtroom after a hearing Friday, April 29, 2016, in Houston. The anti-abortion activist is accused of record tampering for using a fake driver's license to conceal his identity while dealing with Planned Parenthood. He's also charged with misdemeanor attempting to buy human organs. Pat Sullivan/AP Photo

A misdemeanor charge against anti-abortion activist David Daleiden for offering to buy human tissue during his undercover investigation of Planned Parenthood was dropped in a Texas court by Presiding Judge Diane Bull.

The charge that Daleiden “unlawfully, intentionally and knowingly offer[ed] to buy human organs, namely, fetal tissue, for valuable consideration” was a class A misdemeanor. It followed his meetings with Planned Parenthood employees that were filmed and eventually became a widely-circulated, eight-minute Center for Medical Progress undercover video.

The selectively-edited video suggested that Planned Parenthood, the nation’s largest provider of contraceptive and abortion services, profits off the sale of “baby parts,” which the organization denies. Following the release of the video last summer, twenty states investigated the charges and either cleared Planned Parenthood of wrongdoing or decided to not investigate further. Five congressional committees have also failed to find any evidence of wrongdoing.

Daleiden still faces a felony charge for allegedly tampering with a government record in using a fake driver’s license during his efforts to investigate Planned Parenthood. Judge Bull dismissed the misdemeanor charges because the Harris County Criminal Court did not have the jurisdiction over the case. The Center for Medical Progress issued a statement that claimed the ruling protected the First Amendment and the Center’s so-called “investigative journalism work.”

“The dismissal of the first indictment today sends a strong message to Planned Parenthood and their political cronies that colluding to suppress the First Amendment rights of citizen journalists will never work,” the group stated.

But Daleiden’s legal troubles are not over. He still faces a lawsuit against the Center for Medical Progress brought by Planned Parenthood for racketeering, illegally creating and using fake driver’s licenses, and invading the privacy of and illegally recording Planned Parenthood officials and staff.

“The people behind this fraud lied and broke the law in order to spread malicious lies about Planned Parenthood to advance their extreme anti-abortion political agenda,” said Melaney A. Linton, CEO of  Planned Parenthood Gulf Coast. “It’s become totally clear that the only people who engaged in wrongdoing are the criminals behind this fraud, and we will allow the court to hold them accountable.”