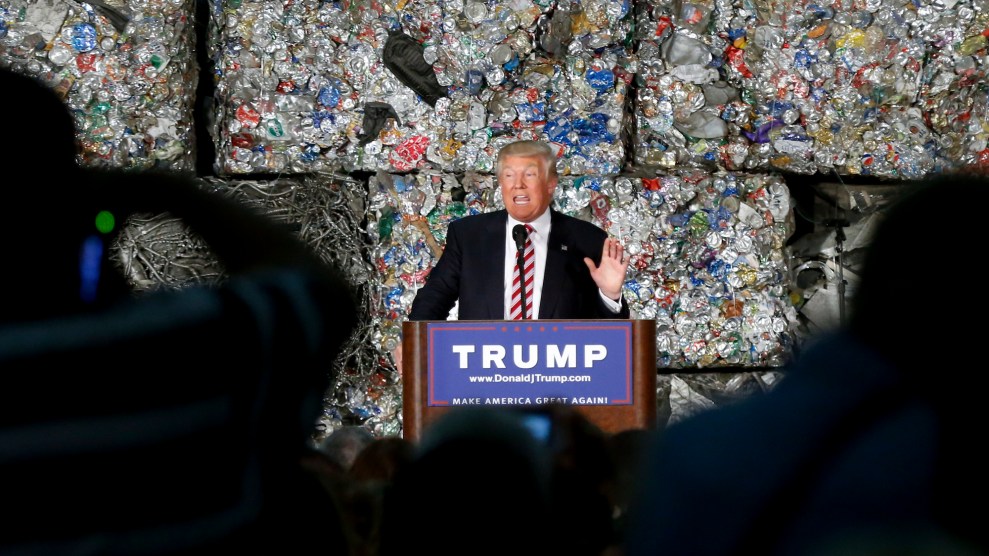 “Globalization has made the financial elite who donate to politicians very wealthy, but it has left millions of our workers with nothing but poverty and heartache,” Trump said. “I want you to imagine how much better our future can be if we declare independence from the elites who’ve led us to one financial and foreign policy disaster after another.”

Standing in front a wall of crushed aluminum cans at a steel plant near Pittsburgh, the presumptive GOP presidential nominee outlined a seven-point plan that included withdrawing from the Trans-Pacific Partnership, which he called “the death blow for American manufacturing”; renegotiating the North American Free Trade Agreement (and withdrawing from the treaty if Canada and Mexico don’t agree); and taking numerous steps to crack down on alleged Chinese trade abuses, including currency manipulation.

Clinton, Trump charged, was the handmaiden for anti-working-class policies, having supported TPP and NAFTA. While she was secretary of state, Trump said, she “stood by idly while China cheated on its currency, added another trillion dollars to our trade deficits, and stole hundreds of billions of dollars in our intellectual property.” With these accusations, Trump once again made an explicit appeal to Bernie Sanders supporters. Sanders is a vocal critic of TPP, NAFTA, and other trade deals, and Trump quoted the Vermont senator in attacking Clinton for supporting free trade. “As Bernie Sanders said, Hillary Clinton ‘voted for virtually every trade agreement that has cost the workers of this country millions of jobs,'” Trump said.

Trump linked his old-school trade policies to the United Kingdom’s vote on Thursday to leave the European Union. “Our friends in Britain recently voted to take back control of their economy, politics and borders,” he said. “I was on the right side of that issue—with the people—while Hillary, as always, stood with the elites.” Trump was in Scotland last week, arriving just hours after the referendum result was announced, and congratulated the Scots for “taking their country back”—even though Scotland voted overwhelmingly to remain in the EU. He also told reporters there that the pound’s quickly declining value would bring in more tourists and help his golf courses.

Yet while Trump claimed that protectionism and support for manufacturing would “create massive numbers of jobs” and usher in “a new era of prosperity,” there’s little evidence for those promises. For instance, Trump rhapsodized about the prosperity that tariffs would bring back to the American steel industry, but the United States already slaps a 266 percent tariff on some Chinese steel imports and employs other anti-dumping measures. And American manufacturing production has actually increased over the last six years, but technology advances mean those gains don’t create many new jobs.

Meanwhile, the credit ratings agency Moody’s issued a report last week finding that Trump’s plan would result in “a more isolated US economy” with “larger federal government deficits and a heavier debt load.” The agency acknowledged that Trump’s plan was vague, but its best guesses at what his economic policy would look like were frightening. “By the end of his presidency, there are close to 3.5 million fewer jobs and the unemployment rate rises to as high as 7%, compared with below 5% today,” the report read. “During Mr. Trump’s presidency, the average American household’s after-inflation income will stagnate, and stock prices and real house values will decline.”