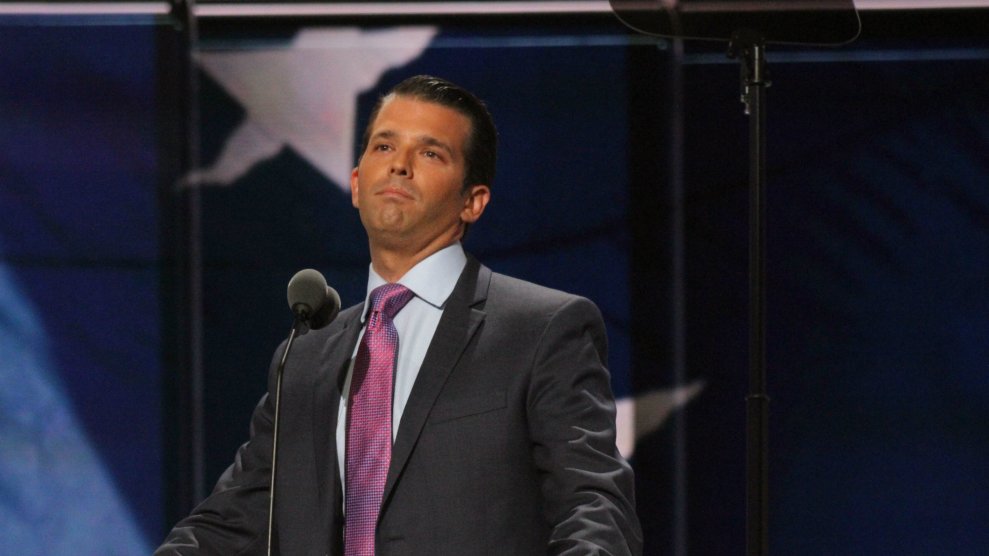 Though perhaps the biggest story of Donald Trump’s Republican National Convention so far has been his wife Melania’s plagiarism scandal, many of the other speeches and media interviews have been marked by falsehoods, exaggerations, and straight-out lies. Here’s a roundup of some of the biggest and most brazen whoppers so far.

Fact-check: Both FactCheck.org and PolitiFact say there is no evidence to back up Trump’s claim that he had a hand in choosing the site of this year’s convention. As the Washington Post reported, the Republican National Committee chose Cleveland in 2014, about a year before Trump announced his candidacy for president.

Donald Trump Jr., on his father: “A president not beholden to special interests, foreign and domestic, and one who funded his entire primary run out of his own pocket just to prove it.”

Fact-check: Donald Trump’s campaign had received almost $17.1 million in contributions from individuals other than Trump as of the end of May, according to Federal Election Commission filings.

Trump has funded a large portion of his primary campaign, but his own website prominently features a “Donate” button, making it clear the campaign is ready and willing to accept contributions.

Fact-check: An investigation by USA Today “found hundreds of people—carpenters, dishwashers, painters, even his own lawyers—who say he didn’t pay them for their work.” The list includes at least 60 lawsuits by employees or contractors who say he never paid them and at least 253 subcontractors at the Taj Mahal casino in Atlantic City, New Jersey, who have made similar claims. PolitiFact rated Ruffin’s statement “false,” saying his use of the word “always” is quite a stretch, considering the evidence uncovered by USA Today.

Sen. Jeff Sessions (R-Ala.): “Doesn’t this help to explain why our wages have fallen and why we have the lowest percentage of Americans actually holding a job in 40 years?”

Fact-check: Wages have actually been rising, according to data from the Bureau of Labor Statistics. Likewise, the unemployment rate has been steadily declining.

Sessions’ claim about the “labor force participation rate” is also slightly inaccurate. FactCheck.org explains that the rate last September, which clocked in at 62.4 percent, was “the lowest since October 1977,” not quite 40 years ago. More important, this number can be attributed largely to demographic changes, not to immigration, as Sessions implied.

Fact-check: Clinton has proposed expanded background checks and keeping military-style weapons out of civilian hands, but she doesn’t advocate a repeal of the Second Amendment. National Review noted that in April she said, “There is a Second Amendment, there are constitutional rights. We aren’t interested in taking away guns of lawful, responsible gun owners.

PolitiFact rated this claim “false” after Donald Trump made it at a rally in May.

Sen. Shelley Moore Capito (R-W.Va.): “Right now the burden of government regulations in this country amounts to roughly $15,000 a household.”

Fact-check: The Washington Post‘s Fact Checker has debunked this claim, noting that it comes from a report from a group with a free-market ideology. The report itself admits the number is “not scientific,” and the Post called it “an idiosyncratic guesstimate.”

Fact-check: Clinton has supported a path to citizenship, but she does not back open borders. In fact, she has said security is paramount. In a speech in New Hampshire in November, Clinton said, “We need to secure our borders, I’m for it, I voted for it, I believe in it, and we also need to deal with the families, the workers who are here, who have made contributions, and their children.”

Fact-check: The decision to put Boko Haram on a terror watch list would not have risen to the level of the secretary of state, according to the Washington Post‘s Fact Checker. The issue would have been decided by a deputy well before it reached her desk, the Post says. The New York Times adds that several Boko Haram leaders were designated as terrorists, and the group was ultimately added to the terror watch list in 2013.

The attempt by Christie to draw a link between Boko Haram’s status on the terror watch list and the abduction of Nigerian schoolgirls has also been discarded. Both the Post‘s Fact Checker and Slate say there is no evidence to show that an earlier designation as a terror group would have prevented the kidnappings.

Florida Gov. Rick Scott: “Our economy is not growing.”

Fact-check: The country’s GDP growth has increased each year since 2010, with a 2.4 percent rise in 2015, according to data from the Bureau of Economic Analysis. Unemployment is also down to 4.9 percent as of June. PolitiFact gave Scott’s assertion a “false” rating.

Fact-check: There is a lengthy vetting process for applicants for refugee status that can take anywhere from 18 to 24 months to complete, according to the State Department. The White House guide to the process says “refugees undergo more rigorous screening than anyone else we allow into the United States.” The New York Times has called it “onerous” and “complex,” and for refugees deemed a potential national security threat, BuzzFeed has reported that there is an additional, secret vetting program.

Fact-check: After his speech to the RNC on Monday night, Sabato reignited an old Trump fabrication that Obama is a Muslim. This claim has been widely debunked and refuted by fact-checkers. PolitiFact rated this claim “pants on fire!”, its designation for the most egregious lies. In his book, The Audacity of Hope, Obama repeatedly mentions his Christian faith, and as PolitiFact notes, several independent sources have verified his Christianity.

Trump campaign chairman Paul Manafort, on plagiarism in Melania Trump’s speech: “The Clinton camp was the first to get it out there and try to say that there was something untoward about the speech that Melania Trump gave.”

Fact-check: The blatant similarity between Melania Trump’s convention speech and Michelle Obama’s in 2008 was actually uncovered by a Twitter user named Jarrett Hill, who told PolitiFact that he has “literally no ties to the Clinton campaign.” The campaign also denied involvement, with Clinton Communications Director Jennifer Palmieri tweeting, “Nice try, not true.”

Fact-check: When asked by Mother Jones‘ David Corn about Trump’s comments to the Times that he would not automatically defend members of the NATO alliance that did not “fulfill their obligations to us,” Manafort denied his candidate ever said that. When the transcript of Trump’s interview with the Times came out, sure enough, he had said exactly that.