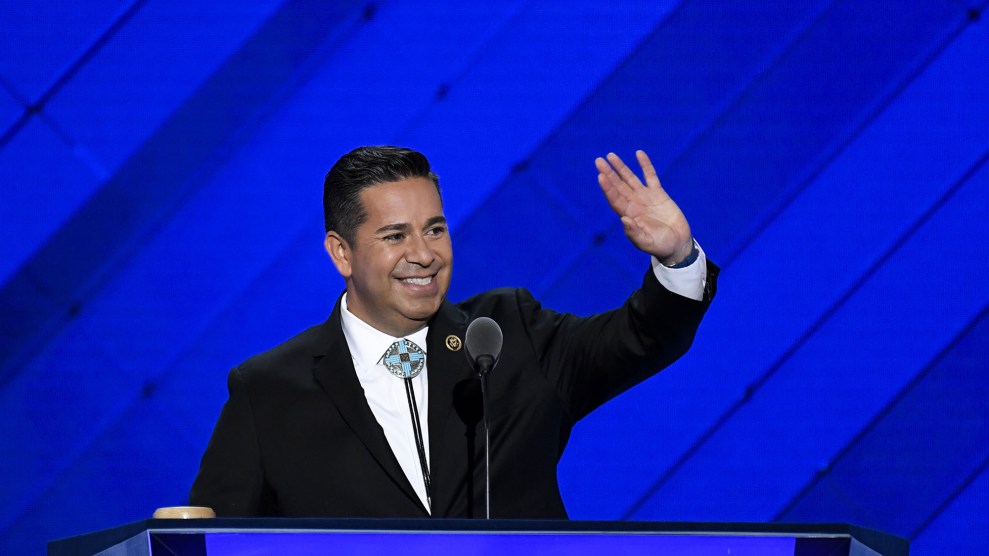 Democratic Congressional Campaign Committee Chair Rep. Ben Ray Lujan (D-N.M.) speaks at the Democratic National Convention in Philadelphia the day before it was revealed that the DCCC had been hacked. Bill Clark/Zuma

The Democratic Congressional Campaign Committee has been hacked.

“The DCCC can confirm that we have been the target of a cybersecurity incident,” DCCC National Press Secretary Meredith Kelly said in a statement posted by Reuters‘ Dustin Volz. Kelly said the DCCC has engaged CrowdStrike, the same firm brought in to investigate the Democratic National Committee hack first revealed in June, to deal with the incident. “Based on the information we have to date, we’ve been advised by investigators that this is similar to other recent incidents, including the DNC breach,” said Kelly.

The DCCC is party’s fundraising and campaign arm for Democratic House incumbents and candidates. Reuters first reported Thursday night that the DCCC had been hacked in order to get information about donors, or perhaps to redirect donations intended for the DCCC to a phony website. Reuters‘ sources said there’s evidence to suggest that the attacks were associated with Russian-based computers. A Kremlin spokesperson told the news service that Russia wasn’t involved: “We don’t see the point any more in repeating yet again that this is silliness.”

The revelations about the DCCC come a week after Wikileaks posted nearly 20,000 hacked DNC documents, emails, and other files and revealed, among other things, that some DNC officials had discussed ways to harm Bernie Sanders’ campaign for president. Released the day after the Republican convention in Cleveland, the revelations disrupted the beginning of the Democratic convention and forced the resignation of DNC Chair Debbie Wasserman-Schultz. The DNC announced June 14 that it had been hacked over the course of a year and that its  security research firm believed Russian hackers were responsible. In the ensuing weeks, other cybersecurity researchers and anonymous US government officials have blamed Russian hackers working with or for the Russian government for the intrusion. Some of these officials have suggested that Russia is attempting to influence the 2016 presidential election.

James Clapper, the director of National Intelligence, said Thursday that the US government doesn’t “know enough [yet] to…ascribe a motivation [for the hack] regardless of who it may have been.” He told an audience at the Aspen Security forum in Colorado that it was probably the work of one of “the usual suspects.” But he also said that he’s “taken aback a bit by…the hyperventilation” over the DNC hack.

“I’m shocked somebody did some hacking,” he told the crowd sarcastically. “That’s never happened before.”