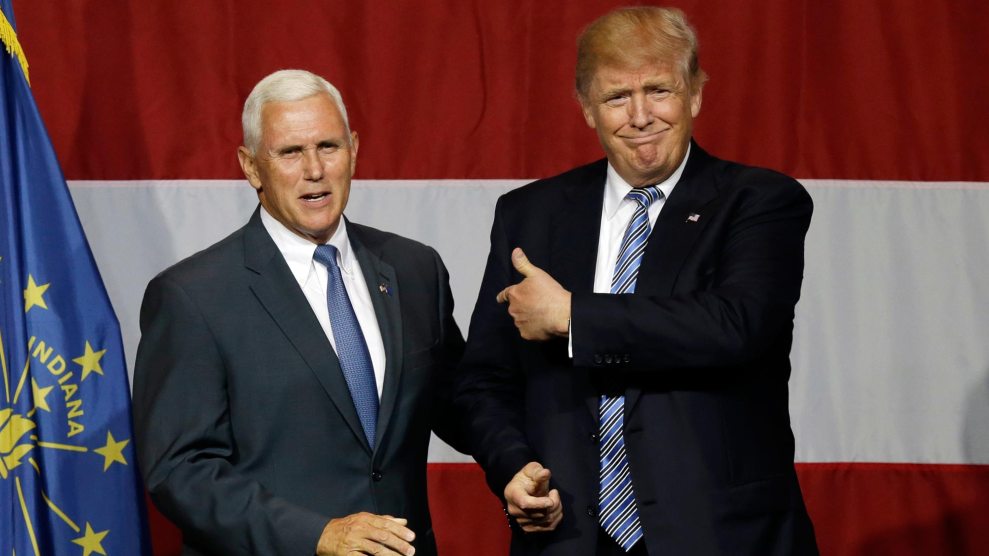 Donald Trump has reportedly selected Indiana Gov. Mike Pence as his running mate, according to the Indianapolis Star and other outlets. It’s a move that will surely appeal to the religious right, a constituency Trump has courted by meeting with evangelical leaders and promising to appoint anti-abortion Supreme Court justices. In contrast to the thrice-married, formerly pro-choice, ideologically flexible Trump, Pence is a lifelong conservative who could assuage evangelical voters skeptical of Trump’s election-year conversion to social conservative values.

A father of three, Pence worked as an attorney in private practice and had two unsuccessful bids for the House of Representatives before winning the seat in 2000 and serving for 12 years. He was elected governor in 2012. He also has media experience: In the 1990s, he hosted The Mike Pence Show, a talk radio show, and described himself as “Rush Limbaugh on decaf.”

In Congress, Pence was a champion of conservative and religious causes. He voted against measures aimed at preventing LGBT discrimination and helping families in poverty, and he supported federal legislation prohibiting same-sex marriage. As governor of Indiana, Pence has brought this Religious Right-friendly agenda to the state and enacted a number of stringent socially conservative measures.

Here’s a summary of his conservative record:

He is not a fan of LGBT rights: In 2003, Pence, then representing the sixth congressional district of Indiana, co-sponsored an amendment that would have prohibited same-sex marriage. Four years later, he voted against the Employee Non-Discrimination Act, which aimed to prevent job discrimination based on sexual orientation. While in Congress, he opposed a bill aimed at more effectively prosecuting hate crimes based on sexual orientation and voted against the repeal of the military’s “Don’t Ask, Don’t Tell” policy.

He refused to comply with Obama administration rules aimed at reducing prison rape: In 2014, Gov. Pence wrote to the Department of Justice to argue that the new rules “work only to bind the states, and hinder the evolution of even better and safer practices.” He said Indiana would not follow them.

He has supported deporting undocumented children and sick people and favors building a fence on the border (sound familiar?): In 2009, Rep. Pence co-sponsored a bill that would have eliminated automatic citizenship for children born on US soil to undocumented parents. A few years earlier, he voted in favor of bills that would have allowed for the detention of undocumented immigrants seeking hospital treatment. He also voted yes on a bill—foreshadowing Trump’s current platform—to build a fence on the Mexico border.

He has decimated access to abortion: In March 2016, Gov. Pence signed a measure prohibiting women from obtaining an abortion because of the race, gender, or disability of the fetus, making Indiana only the second state in the nation to do this. The law also held doctors legally liable for wrongful death if it was found they had performed an abortion motivated by one or more of the prohibited reasons. These sorts of bans are opposed by much of the medical community, out of fear that women will censor themselves when it comes to making difficult decisions with the help of their doctors. Following the Supreme Court’s decision in a landmark abortion case in June, a federal judge blocked this Indiana law from going into effect.

He slashed Planned Parenthood funding, spurring clinic closures and an HIV outbreak: In 2011, Pence pushed an amendment through the House to defund Planned Parenthood. This amendment helped kick-start a wave of state actions aimed at removing government support from the women’s health provider. Indiana was successful in its efforts, but a federal judge blocked the law from going into effect. When Pence became governor in 2013, Indiana continued to slash resources for the women’s health provider. By 2014, state funding for Planned Parenthood had been cut nearly in half from 2005 levels. The organization was forced to close five of its smaller clinics, none of which had ever provided abortions, but they did provide STD testing. Soon, Scott County, Indiana, home to one of the closed clinics, became the hub of an enormous HIV outbreak.

He gave protection to businesses in Indiana that discriminate against gay people: In March 2015, Pence signed a bill into law permitting business owners to refuse service to gay and lesbian customers due to their religious beliefs. The bill also allowed religious beliefs to be used as a rationale for other forms of discrimination. As my colleague Molly Redden described it: “An employer who refused to hire Jewish employees could cite his religious beliefs as a defense against discrimination lawsuits. So could a landlord who refused to rent to Muslims, or a business that refused to serve atheists.” In response to this bill’s passage, athletes, celebrities, corporate leaders, and others criticized the state publicly, and some even pulled out of planned business projects there. The band Wilco canceled an Indianapolis show, referring to “thinly disguised legal discrimination,” and Apple’s chief executive, Tim Cook, wrote an op-ed in the Washington Post slamming the law.