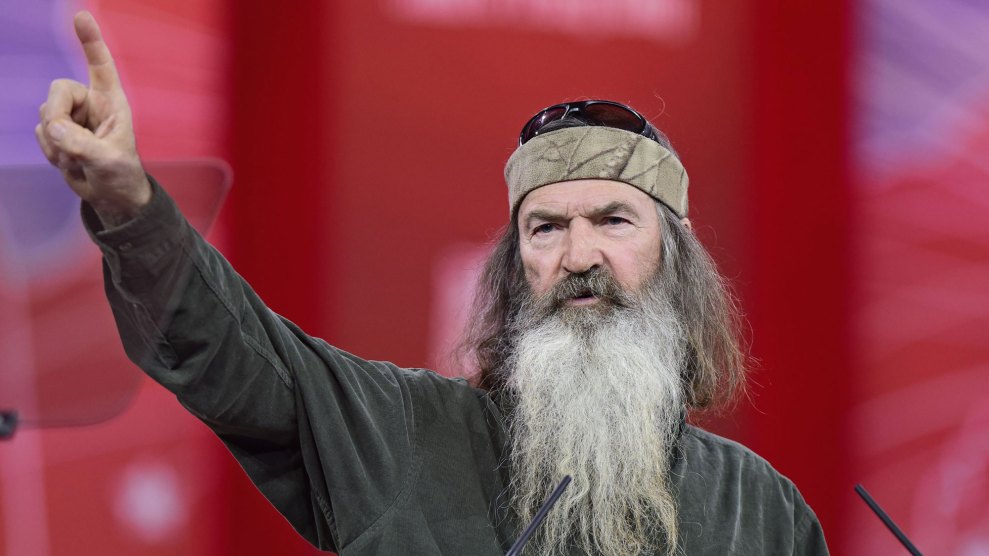 Duck Dynasty patriarch Phil Robertson was one of Ted Cruz’s biggest boosters during the primary: He starred in an ad in full hunting cammo and later stumped for the Texas senator, Bible in hand, calling Cruz a “Godly” man who could help the United States avoid becoming “hell on Earth.” (Cruz, for his part, joked that Robertson would be his Ambassador to the United Nations.) But Robertson eventually warmed to Donald Trump—and following Cruz’s incendiary speech to the Republican National Convention on Wednesday night, told Cruz to suck it up already. “Give me a break, Ted—go ahead and endorse,” he said on Fox and Friends.

Robertson is not speaking at the convention, but he came to Cleveland to host a screening of his new documentary, Torchbearer, which he filmed with the conservative production company Citizens United (of Citizens United fame). In the movie, Robertson, a staunch Christian conservative, travels to famous historical sites around the world—Athens, Rome, Paris, Auschwitz—and details the terrible things that happen when people reject Christianity.

“He could have become a Supreme Court judge. Trump would probably have nominated him!”

After the screening at a downtown theater on Thursday, Republicans munched on spring rolls and sliders as they waited for a chance to grab a photo with the sunglasses-sporting Robertson. Delegates and conservative activists—including some die-hard Cruz supporters—knocked the Texan for stealing the stage and dividing the party, and they chided the nominee, Donald Trump, for letting it happen.

“I was disappointed,” said Scott Hall of Georgia, a Cruz supporter during the primary. “This is about America and the Supreme Court justices and he either believes in the Constitution or he doesn’t, and by not fully supporting what the party believes in my mind he hurt the party. And I think that’s why the crowd felt exactly the same way—if he didn’t intend to support the party he should have stayed home.”

Hugo Chavez-Rey, a Colorado delegate who supported Cruz during the primary, called the speech “a little on the selfish side” and “petty.” “He could have left the hall a hero and instead he fell flat on his face,” he said. “I think his political career is over.”

Colorado delegate Brita Horn was a vocal critic of the way the RNC blocked a push for a roll-call vote on the rules of the convention. But watching the Monday speeches of mothers whose sons had died in Benghazi changed her thinking about the election. Once a Cruz supporter, she now believed it was essential to get behind Trump. “I think [Cruz] was looking for that moment that was gonna make a change for him in four years, and I think he was too raw to be on stage,” she said. “He was too emotionally raw.”

What’s more, Horn felt that Cruz had abandoned the fight against Trump when it might actually have made a difference. “He was the general on our field and he left the field, and left us standing there without a leader,” she said. “We have to go to the next battle.”

“I think he cooked his goose,” Sherry Dooley, a Colorado alternate delegate who backed Trump from the start, said of Cruz. “He could have become a Supreme Court judge. Trump would probably have nominated him!”

Not all the moviegoers were ready to bury the Texas senator. Some wore Cruz pins on their shirts and talked openly of voting third-party unless, as the senator urged, Trump shifted his message to one more tolerable for conservatives. “I don’t see how you could support somebody that’s saying that you’re a lyin’ cheatin’—why would you lend your endorsement?,” said Colorado delegate Bradley Barker, who has not decided who he’ll support in November. “Cruz did agree to support the nominee. That does not mean he has to come out in a strong endorsement. He supported the nominee in the speech last night—if the nominee does actually support the Republican principles.”

Anita Stapleton, a Washington state delegate, was wearing a white “Cruz Country” pin an an alternate’s badge—she’d given her delegate floor pass to someone else because she wasn’t in the mood for celebrating. “He didn’t get up there and lie and blow a bunch of smoke up Trump’s you-know-what,” she said of Cruz. “If he would have gone up there and said, ‘America, I endorse Donald Trump, I’m gonna vote for him, and honor my pledge,’ he’d be a liar. Then Trump can say he’s Lying Ted.” If she had to vote today, she said, it’d be for Libertarian Party’s Gary Johnson.