A handful of anarchists and communists were surrounded by police and media in Downton Cleveland Thursday.AJ Vicens

A group of no more than 15 activists led hundreds of police and journalists on a winding, impromptu march through the streets of Downtown Cleveland Thursday afternoon as they chanted anti-capitalist slogans.

The peaceful march was punctuated by moments of yelling between a self-proclaimed Communist and his anarchist cohort and a group of pro-capitalist counter-protesters who followed them the entire time while using a megaphone to extol the benefits of free markets. No arrests were made, and there were no reported injuries, according to the Cleveland Police Department. So far 23 people have been arrested as a result of protest-related activity during the Republican National Convention, according to the city of Cleveland.

“We wanted to have some discourse in Public Square, but then pretty much cops just started following us everywhere, it was unbelievable,” said Pat Mahoney, a member of the local chapter of the Industrial Workers of the World, a leftist workers’ rights organization, and one of the marchers leading the way.

It started mid-afternoon near the Public Square fountain, the site of many intense debates between various groups this week. On Thursday, a group from the virulently anti-gay Westboro Baptist Church tried to argue with a small gathering of anarchists and Communists, but police quickly moved to separate the two side. The anarchists and Communists later tried to move to various points throughout the square to talk with other people but were repeatedly followed and surrounded by dozens of police. 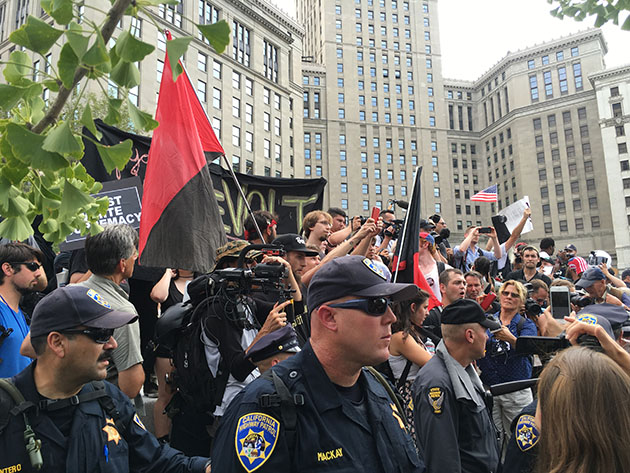 The small group of leftists then set off on a winding route through downtown for more than an hour, with hundreds of police officers and media in tow. At several points, the protesters got into yelling matches with a group of counter-protesters, including Gunnar Thorderson of Salt Lake City, Utah. Thorderson said that all of the counter-protesters worked for Turning Point USA, a Chicago-based nonprofit group advocating for free markets, capitalism, and limited government.

“We saw the opportunity arise when they started their march to just follow them and counter-protest,” said Thorderson, 23, after the march concluded. “It worked well to create that discourse that the media loves to see.”

He said the “discourse” was mostly peaceful, although he added that at various points their signs were ripped out of their hands and that someone punched him in the chest.

“Those guys are out here just like me, and they have their ideas, and they want their voices to be heard,” he said.

Cleveland Police Deputy Chief Wayne Drummond wouldn’t reveal how many officers were involved, but he did say that it was enough to protect the rights of the marchers along with everyone else on the streets.

“Some folks have the tendency to say it’s overkill,” he said when discussing the heavy police presence. “We have a responsibility and a duty to protect everyone. Part of that is making sure we have sufficient amount of personnel to do that.”

One of the marchers disagreed.

“This is absurd,” said Edward Arnold, a student at nearby Case Western University who was marching with the leftists. “The more we moved, we were like magnets that attracted more reporters, and more cops, so it just got to point it was so massive we just couldn’t stay, so we went out into the streets.”