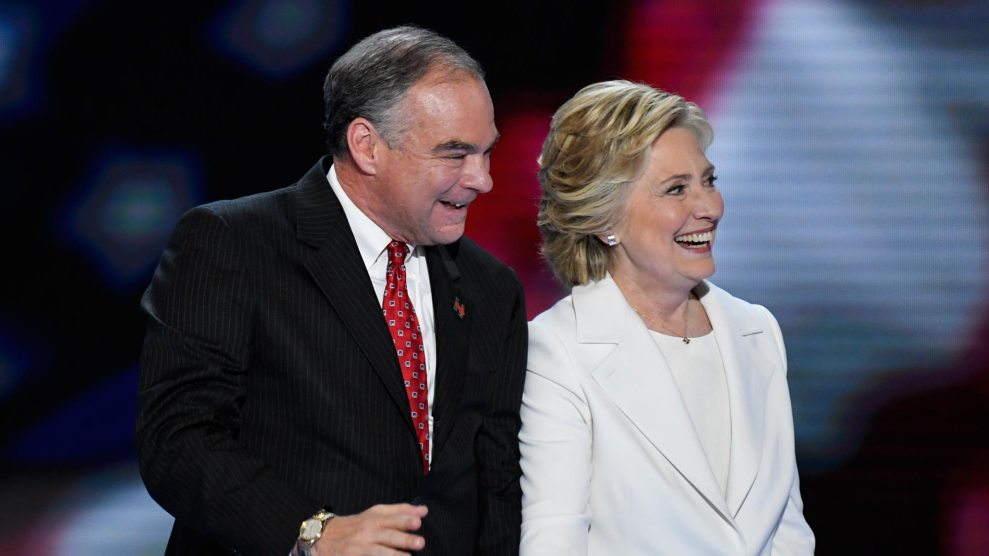 Earlier this week, the 2016 Democratic platform committed to securing public funding for abortion by calling for the repeal of the Hyde and Helms amendments. The Hyde Amendment prohibits the use of federal Medicaid money to pay for the procedure for low-income women, and the Helms Amendment bans the use of US foreign aid to help women abroad obtain abortions.

But on Friday, Hillary Clinton’s vice presidential nominee, Sen. Tim Kaine (D-Va.), broke from both Clinton and the party when he said in an interview on CNN that he still supports the Hyde Amendment. “I have been for the Hyde Amendment,” said Kaine, a lifelong Catholic, repeating several times, “I haven’t changed my position on that.” Kaine is only repeating what he told the Weekly Standard earlier this month, when the Democratic Party first released its draft platform. “I haven’t been informed of that change, but I’m going to check it out,” Kaine said. “I’ve traditionally been a supporter of the Hyde Amendment, but I’ll check it out.”

Kaine has a 100 percent rating from Planned Parenthood and has long said he doesn’t personally believe in abortion but supports it as a legal right. Still, he has had a mixed record on the issue during his political career. As governor of Virginia from 2006 to 2010, Kaine supported a partial-birth abortion ban, as well as a parental notification measure. NARAL refused to support his gubernatorial bid, and in 2009 Kaine signed a bill that created “Choose Life” license plates whose proceeds are funneled to anti-abortion groups.

But as Clinton’s VP vetting process this year ramped up, Kaine appeared to be more outspoken in his support of abortion rights, presumably to further align himself with the direction of the party. He issued an approving statement on the Supreme Court’s June decision to invalidate two Texas abortion restrictions. “I applaud the Supreme Court for seeing the Texas law for what it is—an attempt to effectively ban abortion and undermine a woman’s right to make her own health care choices,” he wrote. And later in June, the Huffington Post pointed out that Kaine had suddenly signed on as a co-sponsor to the Women’s Health Protection Act—a bill that would ban states from passing medically unneccesary restrictions on abortion that has been slowly moving through Congress for three years with dozens of sponsors.

Earlier this week, Kaine was reported to have changed his position on the Hyde Amendment: Bloomberg News reported that spokespeople for both Clinton’s campaign and Kaine had told the outlet that Kaine had said privately that he would support the Hyde repeal. His interview on CNN Friday rolled back those statements, creating a rift between Kaine and the party that pro-choice advocates thought had been resolved. “In this campaign, Hillary Clinton has broken new ground with her frank talk about the damaging effect of denying poor women basic reproductive healthcare,” wrote NARAL President Ilyse Hogue in a statement released Friday afternoon. “This is why Senator Kaine’s statement earlier today that he opposes repealing the discriminatory Hyde amendment was deeply disappointing.”

The Hyde Amendment is popular among more conservative voters in both parties, so Kaine’s support of it could be a selling point to those who are wary of Trump but feel Clinton has gone too far left on abortion. At a Democrats for Life event in Philadelphia this week, the group’s leader, Kristen Day, expressed frustration over the platform’s anti-Hyde-amendment provision, saying that Clinton appears to no longer believe that abortions should be “safe, legal, and rare”—a phrase from the nominee’s unsuccessful 2008 campaign. Anti-abortion groups like the Susan B. Anthony List viewed the support of public financing for abortion as the Democratic Party’s abandonment of compromise across the political divide. “There is no hiding the fact now that Hillary Clinton’s Democratic Party is the party of abortion-on-demand, paid for by us—the taxpayers,” wrote Susan B. Anthony President Marjorie Dannenfelser in an email to subscribers on Wednesday.

In a statement issued on Friday responding to Kaine’s support for the Hyde Amendment, Planned Parenthood Action Fund President Cecile Richards said her group “will redouble efforts to educate Senator Kaine on the dangerous impact Hyde has on women with public insurance coverage.”

She added, “While we strongly disagree with Senator Kaine on this point, there are many places where we do agree. He has been an outspoken advocate for access to reproductive health care and stands in stark contrast to Mike Pence and Donald Trump, whose nightmarish commitments include ending access to care at Planned Parenthood health centers, punishing women for having abortions, and appointing Supreme Court judges to overturn the right to safe, legal abortion.”