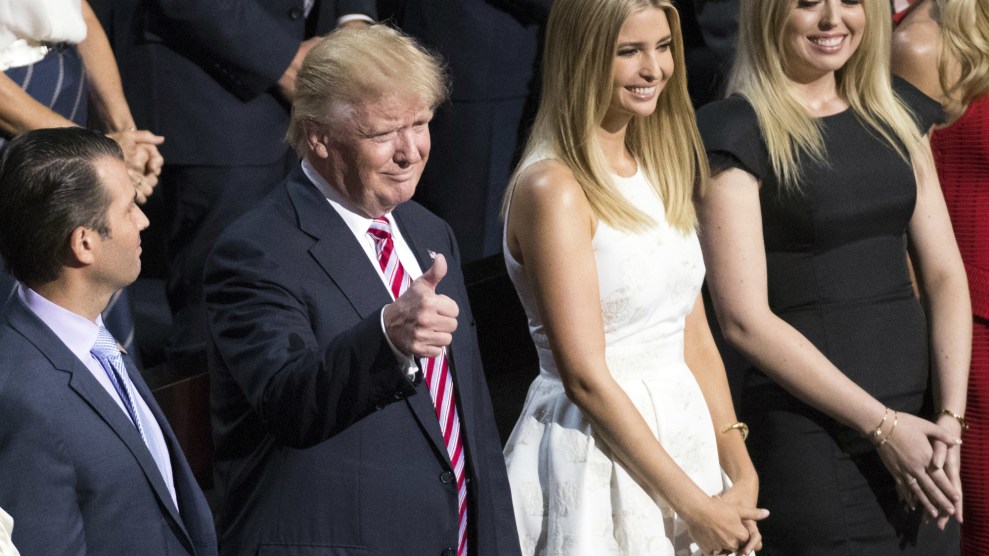 In the leaked version of Donald Trump’s acceptance speech, he rails against special interests, big donors, and elite media figures as the puppet masters behind Hillary Clinton. But waiting backstage and seated in the luxury boxes at the Quicken Loans Arena as he delivers his big address will be the very type of people he denounces.

According to a copy of the speech obtained by the Washington Post, Trump will blame America’s problems on special interests, as he has done throughout the campaign:

…These interests have rigged our political and economic system for their exclusive benefit. Big business, elite media and major donors are lining up behind the campaign of my opponent because they know she will keep our rigged system in place.

They are throwing money at her because they have total control over everything she does.

She is their puppet, and they pull the strings. That is why Hillary Clinton’s message is that things will never change.

But an official guest list for the VIP boxes at the fourth and final night of the Republican National Convention, first published by Bloomberg on Thursday afternoon, includes billionaire mega-donors such as Las Vegas casino owner Sheldon Adelson, Wisconsin roofing supply mogul Diane Hendricks, and the Amway scions of the DeVos family. (If Trump’s puppet master line sounds familiar, it’s because he once mocked Marco Rubio as “a perfect little puppet” of Adelson, who was believed to prefer the Florida senator.)

Adelson, Hendricks, and the Devoses will be situated in Suite 125 at the Quicken Loans Arena, located directly behind the podium where Donald Trump will make his acceptance speech, where they will be joined by:

This luxury box will also include a handful of Trump’s closest political allies, such as governors Chris Christie and Rick Scott.

In another suite, hosted by Mnuchin, key Trump business and political allies will huddle. The list includes Phil Ruffin, Trump’s partner on his Las Vegas hotel; billionaire Andy Beal, a banker, mathematician, and poker player; Tom Barrack, the Los Angeles billionaire investor who is heading an effort to raise money for a pro-Trump super-PAC; Harold Hamm, a natural gas fracking mogul who Trump is said to be considering for Energy secretary in a potential Trump administration; and…Nacho Figueras, an Argentinean model and polo player.

In another suite, Rebekah Mercer, the daughter of hedge fund billionaire (and former Ted Cruz backer) Robert Mercer. The leaked documents show Mercer (and a bodyguard) will be joined by five guests, including Steve Bannon, the chairman of Breitbart News, Matt Boyle, the conservative website’s Washington editor, and other Breitbart staff.

If Trump starts to rail against NAFTA, another suite may fall a little silent—one invitee is Dennis Nixon, CEO of Laredo, Texas-based International Bank of Commerce, whose website hails him as “instrumental” in the passage of NAFTA. Nixon’s guests include IBC executive Eddie Aldrete, vice-chairman of the National Immigration Forum, an immigration reform group, as well as Noe Garcia, a Washington D.C.-based lobbyist who represents the Border Trade Alliance.

The final VIP suite includes Annie Dickerson, a key advisor to hedge funder Paul Singer, who has made his dislike of Trump very clear. Dickerson led the unsuccessful fight last week to include more pro-LGBT-friendly language in the RNC platform, a major issue for Singer, who strongly supports LGBT rights. Dickerson’s listed guest is former Bush adviser Dan Senor, who made news last week when he tweeted about recent conversations with Indiana governor Mike Pence where Pence complained about Trump. (Senor says he won’t be attending.)

It’s disorienting to have had commiserated w/someone re: Trump – about how he was unacceptable, & then to see that someone become Trump’s VP

The full guest list for the VIP suites is below.