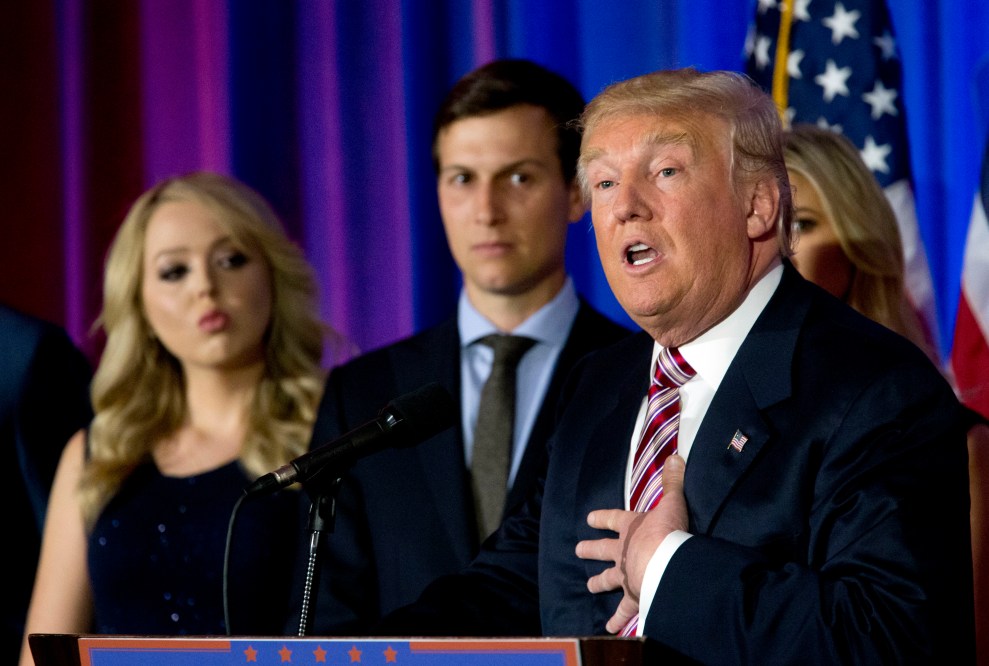 The latest controversy to envelop Donald Trump has spurred furious critics to accuse the presidential candidate of anti-Semitism and to blast Trump’s son-in-law, who is Jewish, for refusing to condemn him.

Trump sparked outrage over the weekend when he tweeted—and later deleted—an image of Hillary Clinton that many have called anti-Semitic: a photo of Clinton against a background of cash, with the words “Most Corrupt Candidate Ever” emblazoned on a six-pointed star. Critics said the tweet drew on stereotypes of Jews and the star resembled the Star of David. Mic reported that the meme had originally been created on an internet forum for neo-Nazis, anti-Semites, and white supremacists.

No Jew can vote for Trump with a clean conscience. He makes very clear the type of people he tries to appeal to. pic.twitter.com/CvhrGpYd6j

Trump deleted the tweet and replaced it with a new image, using a circle instead of a star.

In response to the tweet and the Trump campaign’s response, a New York Observer reporter, Dana Schwartz, penned an open letter to Jared Kushner, Trump’s son-in-law and an owner of the Observer. A New York Times profile of Kushner on Monday described him as Trump’s “de facto campaign manager,” “involved in virtually every facet of the Trump presidential operation.”

Schwartz laid out the problems with Trump’s tweet and called out Kushner for not doing anything in response to Trump’s anti-Semitism:

You went to Harvard, and hold two graduate degrees. Please do not condescend to me and pretend you don’t understand the imagery of a six-sided star when juxtaposed with money and accusations of financial dishonesty. I’m asking you, not as a “gotcha” journalist or as a liberal but as a human being: how do you allow this? Because, Mr. Kushner, you are allowing this. Your father-in-law’s repeated accidental winks to the white supremacist community is perhaps a savvy political strategy if the neo-Nazis are considered a sizable voting block—I confess, I haven’t done my research on that front. But when you stand silent and smiling in the background, his Jewish son-in-law, you’re giving his most hateful supporters tacit approval.

Schwartz also pointed out that Trump failed to apologize for the tweet, instead blaming “dishonest media” for trying to depict the star as the Star of David, rather than a sheriff’s star or, in his words, a “plain star.”

And now, Mr. Kushner, I ask you: What are you going to do about this? Look at those tweets I got again, the ones calling me out for my Jewish last name, insulting my nose, evoking the holocaust, and tell me I’m being too sensitive. Read about the origins of that image and see the type of people it attracted like a flies to human waste and tell me this whole story is just the work of the “dishonest media.” Look at that image and tell me, honestly, that you just saw a “Sheriff’s Star.” I didn’t see a sheriff star, Mr. Kushner, and I’m a smart person. After all, I work for your paper.

The reporter’s open letter is in stark contrast to the Observer‘s editorial board’s stance on the presidential race. In April, the Observer published an editorial endorsing Trump that also acknowledged that Kushner, the paper’s publisher, was Trump’s son-in-law. The publication’s ties to the GOP presidential candidate played a role in at least two reporters’ resignations from the paper, according to Politico.

The Observer‘s editor-in-chief, Ken Kurson, told Politico that he supported publishing the letter but personally disagreed with Schwartz’s criticism of Kushner.

“All presidential candidates attract people whose support makes them uncomfortable,” said Kurson, who said his mother had fled the Holocaust. “I think the effort to paint Donald Trump as an anti-Semite because some of his supporters are is like saying that Bernie Sanders hates the US because some of his supporters spit on American flags at his rallies.

He added, “In my opinion, Donald Trump is not a Jew hater.”

Update 07/06/2016: Jared Kushner has written a response to Schwartz’s letter in the Observer. “My father-in-law is not an anti-Semite,” Kushner wrote. “It’s that simple, really. Donald Trump is not anti-Semitic and he’s not a racist.” Read his full response here.