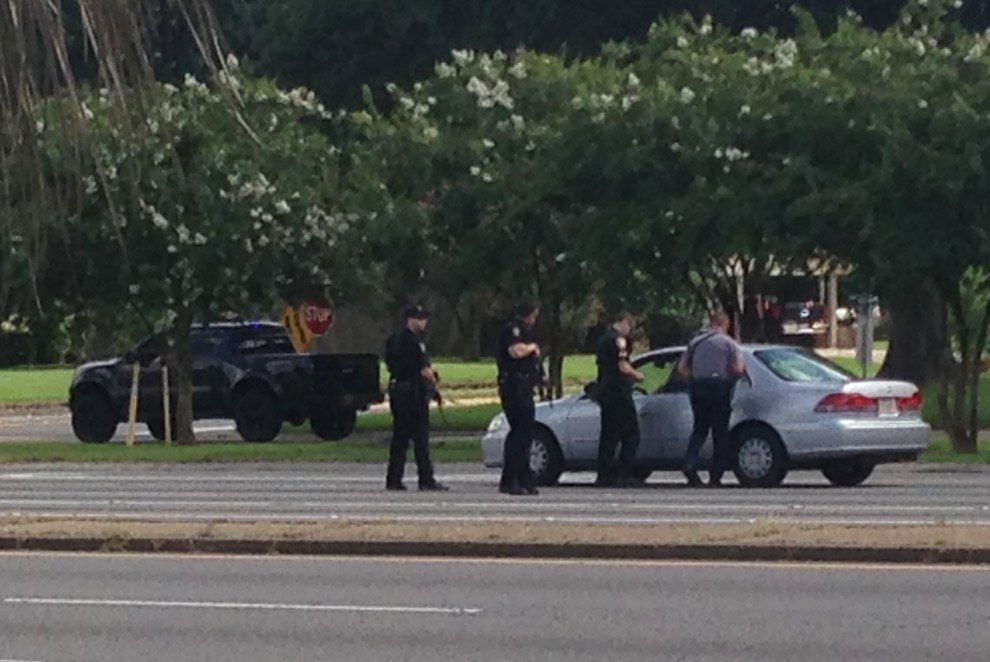 Authorities talk to a driver near the area where several police officers were shot while on duty on Sunday in Baton Rouge, Louisiana.Mike Kunzelman/AP

Update, July 17, 5:42 p.m. ET: The deceased suspect has been identified as 29-year-old Gavin Eugene Long of Kansas City, and he attacked the police on his birthday, CBS News reports.

Update, July 17, 4:49 p.m. ET: Baton Rouge law enforcement officials announced at a press conference Sunday afternoon that there is no longer an “active shooter” situation, and that the deceased suspect was likely the only shooter, according to NBC News. Police initially suspected that there were at least two other shooters at large.

Update, July 17, 3:49 p.m. ET: Louisiana Gov. John Bel Edwards condemned the shootings. “This is an unspeakable and unjustifiable attack on all of us at a time when we need unity and healing,” he said.

#lagov on the shooting of law enforcement officers in Baton Rouge today: pic.twitter.com/BU3B4Iznbe

Update, July 17, 12:39 p.m. ET: The city’s mayor and the East Baton Rouge Sheriff’s office have confirmed that three police officers are dead and three others were wounded in the attack. The sheriff’s office reports that at least one suspect is dead, but two others may still be at large.

At least three police officers were shot and killed and at least four other officers were injured during a gun attack in Baton Rouge, Louisiana, on Sunday morning, according to CNN. The incident occurred just 10 days after an ambush of Dallas police killed five officers and injured nine people.

While no official link has been established, Sunday’s attack comes amid ongoing protests in the city and around the country after the death of Alton Sterling, a black man who was shot and killed by police outside a convenience store in Baton Rouge. Thousands attended Sterling’s funeral on Friday.

Baton Rouge Mayor Kip Holden told MSNBC soon after the attack that the police officers had been responding to reports of gunfire when they were ambushed by at least one gunman. A Louisiana State Police spokesman told the network that the gunman was shot during the incident. The gunman’s condition remains unclear.

We will update this post as new details become available.