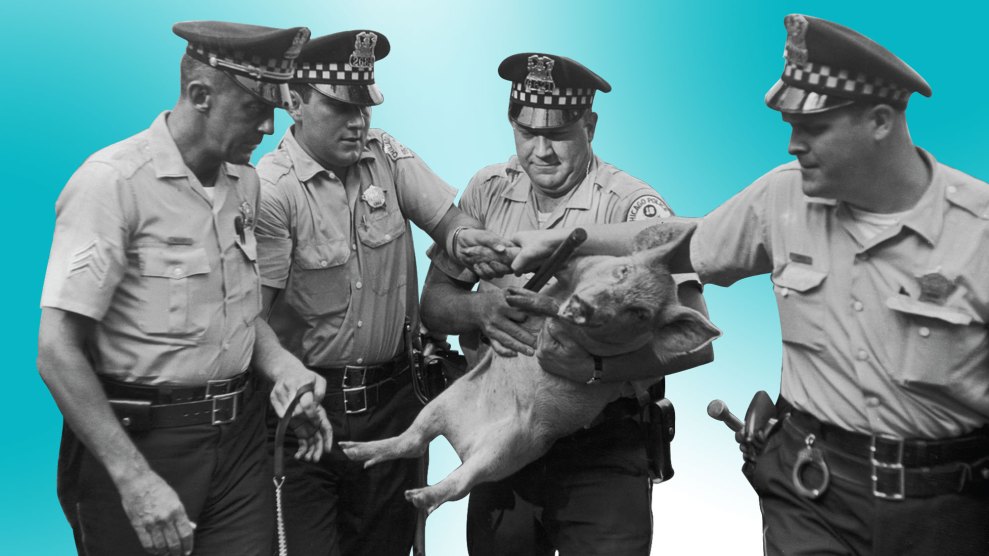 Steak magnate Donald Trump emerged from the Republican primary with just enough delegates to stave off a potential floor fight in Cleveland this week. While that’s bad news for what’s left of the GOP’s #NeverTrump contingent, the real loser may be political junkies, who thought they’d finally see the ivory-billed woodpecker of American politics—the brokered convention. Instead, they’ll have to settle for reliving the chaos of years past.

1836: The Anti-Masonic Party may have invented the political nominating convention, but it certainly didn’t perfect it; the party’s second effort ends without a presidential nominee amid fears that front-runner William Henry Harrison does not actually oppose Freemasonry in all cases.

1839: The first contested convention ends with the first instance of candidate-on-candidate violence. Henry Clay assaults war hero Winfield Scott—who was deep in a game of whist—after hearing that his rival cut a deal to hand the Whig nomination to Harrison. Clay is dragged from the room. Scott challenges him to a duel.

1860: The gold standard of dysfunction. Southern delegates walk out of the Democratic convention in Charleston, South Carolina, over slavery. They bolt again when the party holds a do-over in Baltimore two months later. Mirroring the schism nationwide, the party goes into November with two nominees.

1912: Undeterred by a violent primary campaign (delegates in Missouri were chosen by voters swinging baseball bats), ex-President Theodore Roosevelt promises to use “roughhouse tactics” to seize the Republican nomination from “fathead” President William Howard Taft. Roosevelt breaks with tradition by showing up in Chicago, but after losing a key procedural vote—and amid allegations of bribery on both sides—he abandons his plan to “terrorize” the convention there. Instead, he and delegates walk out and form their own party. 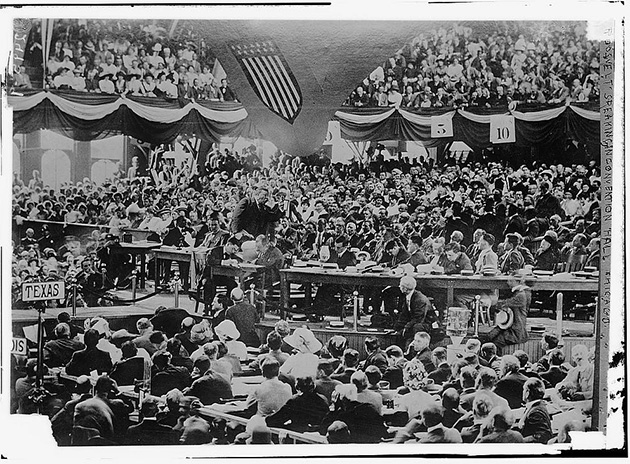 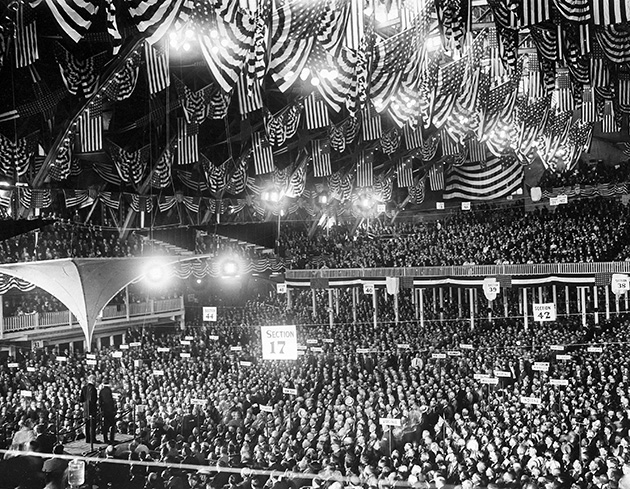 1924: Known as “the Klanbake,” the longest convention in history (16 days) pits the Ku Klux Klan-backed William Gibbs McAdoo against New York’s Catholic governor, Al Smith, in Manhattan. After a plank condemning the Klan is nixed from the platform, 20,000 Klansmen—including some delegates—celebrate in New Jersey by burning a cross and throwing baseballs at an effigy of Smith. 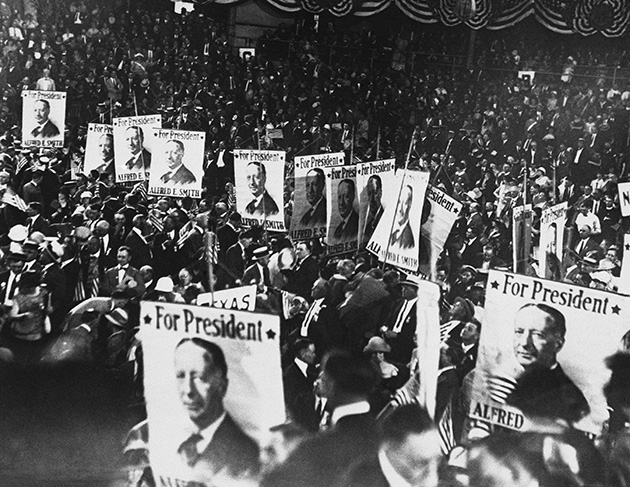 1964: New York’s Republican governor, Nelson Rockefeller, is booed unmercifully at San Francisco’s Cow Palace when he proposes an amendment condemning the “extremism” of the KKK and the John Birch Society. Meanwhile, supporters of the eventual nominee, Barry Goldwater, harass reporters, hurling trash (and racial slurs) at two African American journalists. The “Woodstock of the Right” ushers in a conservative revolution and an electoral disaster. Sound familiar? 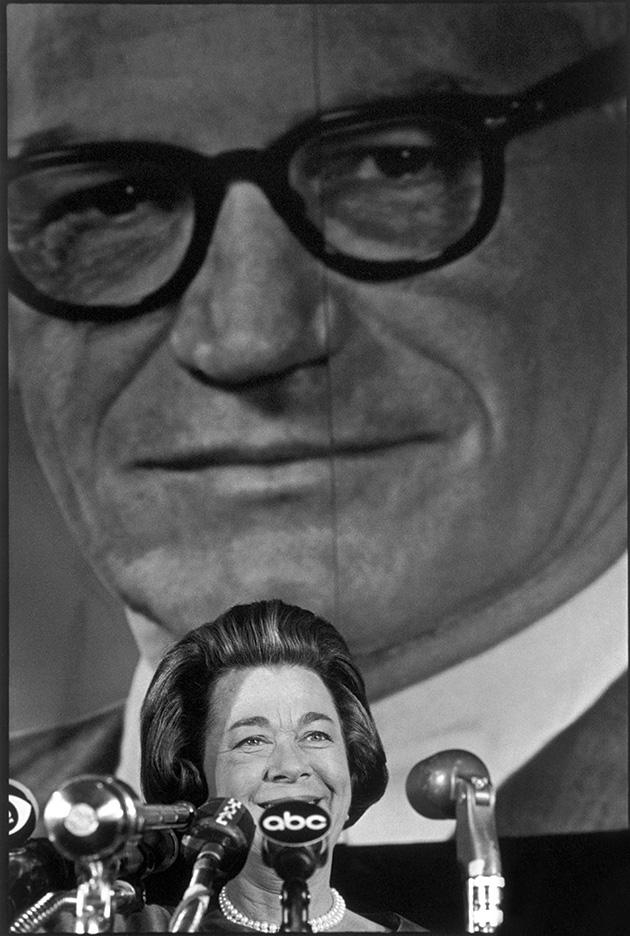 1968: Some 10,000 anti-war protesters clash with more than 20,000 police officers and National Guardsmen outside the Democratic convention in Chicago. The violence spills into the convention hall, where CBS News’ Dan Rather is assaulted by the police on air. Protesters from the Youth International Party—the Yippies—hold a shadow convention to nominate their own presidential candidate, a 145-pound pig named Pigasus.

1976: With President Gerald Ford 24 delegates shy of victory in Kansas City, Ronald Reagan bets the house on a risky move—he picks a running mate. Reagan’s choice of moderate Pennsylvania Sen. Richard Schweiker blows up in his face when the party’s right wing threatens a revolt. Although Ford wins (by a hair) on the first ballot, Reagan has the last laugh: His concession speech overshadows the nominee and sets the stage for his conservative revival four years later. 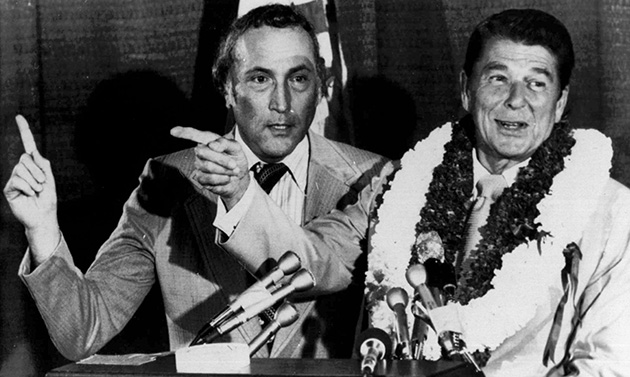