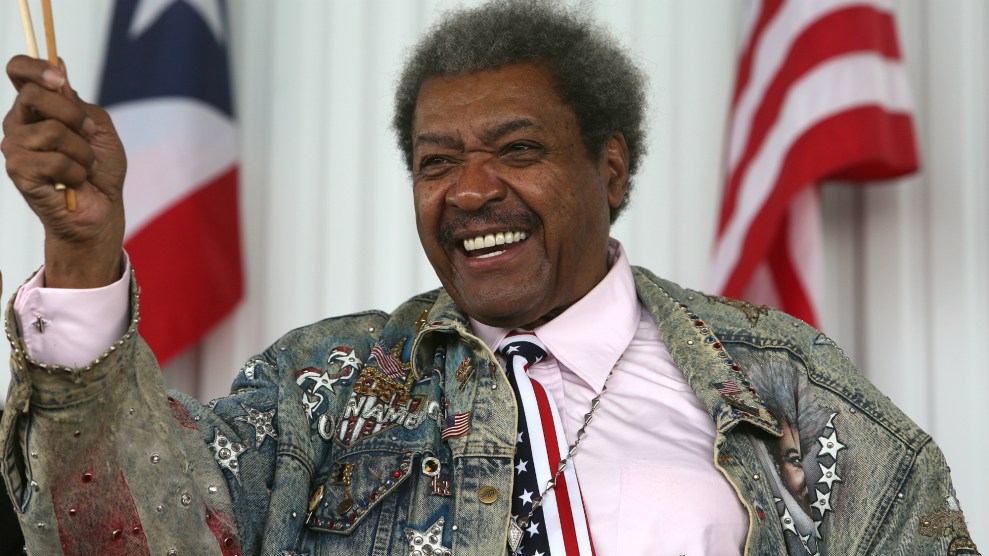 Donald Trump bragged at a rally on Wednesday night that he had secured the endorsement of legendary boxing promoter and wild-hair-enthusiast Don King. The sports impresario had recently published an editorial urging people vote for Trump. The article was a long and rambling rant. (“White women of America please accept and believe this unmitigated fact…that the evil corrupt way of life system of white supremacy and control is your deadly enemy…NOT DONALD J. TRUMP!!!.“) King insisted that voting for Trump was the only way to defeat the “evil corrupt rigged system which has been persecuting, lynching and murdering us for over 300 years.” And Trump told the crowd in Cincinnati, Ohio, that he hoped King would speak at the upcoming GOP convention:

You know who I just spoke to? Big Don King, big Don King. Big Don, greatest boxing promoter of all time. I said, “Don, I’d love you to speak at the convention, because you know what? You’ve beat the system.” And he’s a friend of mine.

Trump was animated as he boasted about King’s endorsement. But bringing King to the convention to testify in favor of Trump would be an odd move. Despite King’s successes in the world of boxing—he has promoted almost every major boxer in the last 50 years—he has a long checkered past, filled with allegations of fraud.

A short list of some of King’s sketchier moments includes:

King has had problems with another one of Trump’s celebrity endorsers: Mike Tyson. During some of the most tumultuous years of Tyson’s career, Trump “advised” the heavyweight champion, while King promoted his fights. In the end, Tyson sued King for $100 million, alleging King cheated him out of millions. The case was settled for $14 million.

So what kind of man does Tyson think King is? Here’s what Tyson said in the 2008 movie Tyson: “I got caught up with this other piece of shit Don King, who is a wretched, just a wretched, slimy, reptilian motherfucker…He’s just a bad man, a real bad man…He would kill his mother for a dollar. He’s ruthless, he’s deplorable, he doesn’t know how to love anybody.”

Trump is right that King has “beaten the system.” He succeeded in getting the second-degree murder conviction reduced and obtaining a pardon. King  also beat two federal indictments. In 1988, he was found not guilty on fraud charges, and in 1985, King was found not guilty of tax evasion charges. King’s lawyers admitted that the promoter had failed to report income, but they blamed it on accounting errors and King’s lack of understanding of the system. The prosecutor in that case was fellow Trump supporter Rudy Giuliani.

So how could someone with all this baggage wind up being touted by a GOP presidential nominee as a reference? Maybe King’s catchphrase is the best explanation: “Only in America!”