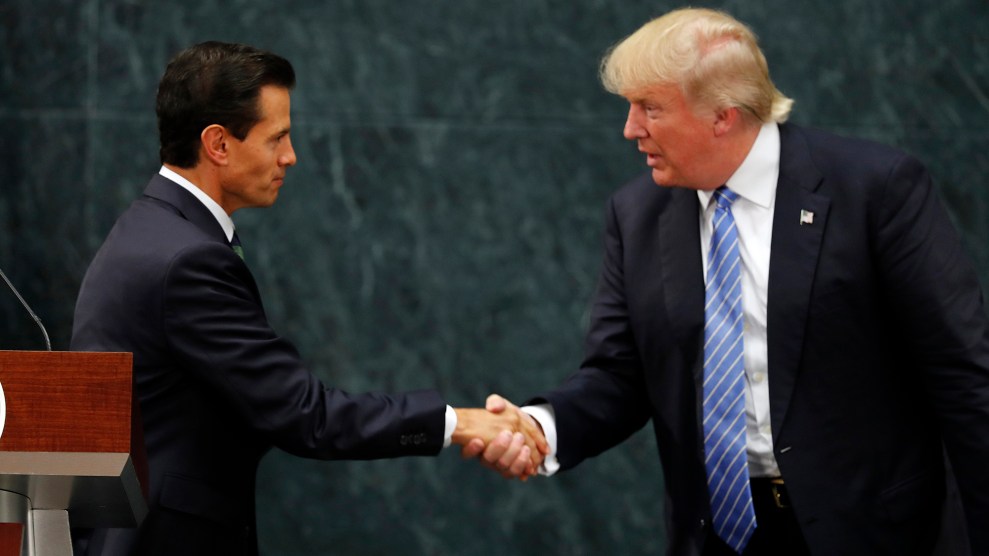 Donald Trump traveled all the way to Mexico City on Wednesday to meet with Mexico’s president, Enrique Peña Nieto, but by his own account, he didn’t ask the Mexican leader to pay for a border wall between the United States and Mexico—a key promise of his campaign. Peña Nieto, for his part, opted not to chasten Trump for the insulting comments he has made about Mexicans, including his claim on the first day of his campaign that Mexico was sending rapists across the border.

“We did discuss the wall,” Trump told reporters after the meeting. “We didn’t discuss payment of the wall. That’ll be for a later date.” Peña Nieto did not take the opportunity to say that Mexico would not pay for it, as his predecessor has done with colorful language.

The effort to gloss over the wall controversy was indicative of the general tone of the event. Each politician handled the other with kid gloves, and neither sought to take a swing. That the meeting and public statements made afterward would go this way was never a foregone conclusion.

Trump’s last-minute decision to go to Mexico to meet with the Mexican leader was a gamble, coming just hours before he is scheduled to give a speech in Arizona detailing his immigration policies. Some suspected that Peña Nieto, whose current approval rating in Mexico is an abysmal 23 percent, would use the opportunity to gain favorability by bashing the even less popular Trump—Mexicans give him an approval rating of 4 percent.

Peña Nieto did take the occasion to contradict some of Trump’s positions. Standing next to Trump, Peña Nieto sang the praises of free trade, and particularly the North American Free Trade Agreement (NAFTA), which Trump regularly rails against in his campaign. But Peña Nieto did say he was open to working with the United States to revise the deal in a mutually beneficial way. Peña Nieto also took issue with Trump’s portrayal of the US-Mexico border by noting that undocumented immigration across the border peaked 10 years ago and has since declined to negligible numbers. He made the point that Mexico actually suffers because cash and weapons flowing south from the United States fuel violence in Mexico. But his tone was conciliatory.

Trump spoke after Peña Nieto and took the occasion to claim a successful and substantive discussion with the Mexican president. He expressed his “tremendous feeling” for Mexican Americans and claimed that he has employed many people of Mexican descent. Reading from prepared notes, Trump stressed that he wanted to renegotiate NAFTA and secure the border. He said he and Peña Nieto agreed that each nation has a right to erect a barrier along its borders. But Trump’s tone was not harsh, and he talked about “mutually beneficial” outcomes for both countries. He ended by telling Peña Nieto, “I call you a friend,” and shaking his hand. With that, Trump pulled off what looked like a successful diplomatic meeting.

If Peña Nieto hoped to score political points with the meeting, he might have blown his chance. Faced with the issue of Trump’s insulting rhetoric about Mexicans, he chose to defend Trump. “Mexicans have felt offended by what has been said,” Peña Nieto said, “but I am certain that his genuine interest is in building a relationship.”