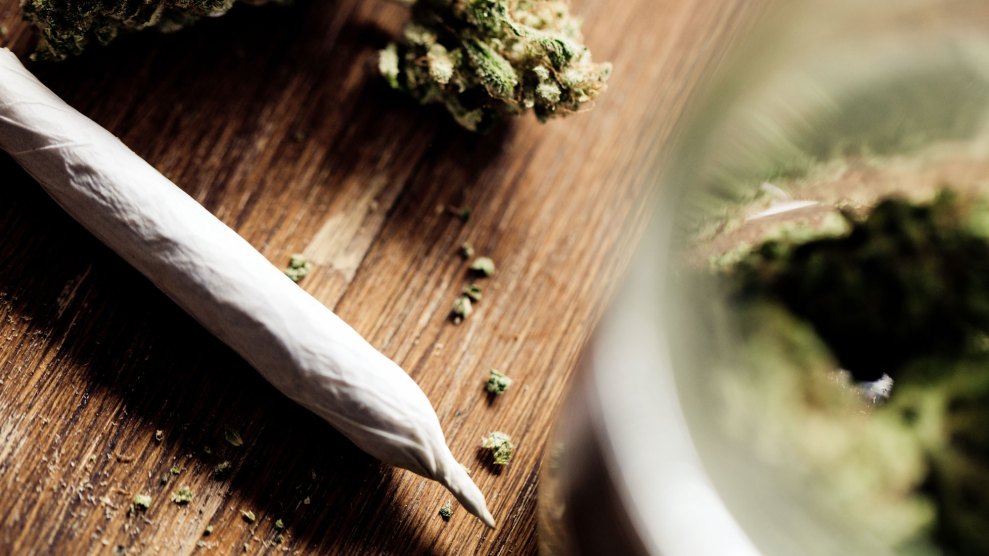 Talk of legal marijuana is growing across the United States like a—well, you get it.

This November, voters in five states where some form of medical marijuana is already legal will decide whether to authorize recreational use: Arizona, California, Maine, Massachusetts, and Nevada.

Pot backers in Michigan are still fighting in court to get a vote on recreational legalization. Another four states—Arkansas, Florida, Montana, and North Dakota—will vote on legalizing medical marijuana. Missouri and Oklahoma may also vote on medical marijuana, but advocates are still working to get their initiatives on the ballot.*

With the presidential election likely to boost voter turnout and polls showing as many as 54 percent of Americans in favor of legalization, pot supporters are feeling confident, says Mason Tvert, communications director for the Marijuana Policy Project.

While opponents warn of unknown health effects and the possibility of spawning a “big marijuana” industry, Tvert argues that “life has gone on as usual” in states where marijuana has already been legalized—Alaska, Colorado, Oregon, and Washington, along with the District of Columbia.

All five of this fall’s state legalization campaigns have adopted the same slogan, “Regulate Marijuana Like Alcohol.” The measures would allow anyone 21 years or older to use the drug, and they would establish legal cultivation and retail markets alongside taxation and regulatory regimes.

Here’s a rundown on where voters could choose to legalize this November:

Supporters of Proposition 205, the legalization measure, withstood a challenge this summer from a collection of business groups and individuals who sued, claiming that backers didn’t have enough valid signatures to get on the ballot. Upon review, the secretary of state found the campaign had well over the necessary 150,642 signatures.

But opponents of the bill, including Maricopa County Attorney Bill Montgomery and Yavapai County Attorney Sheila Polk, are still trying to knock the question off the ballot. They’re among the backers of another suit filed last week aiming to have the measure tossed, arguing the proposed law is flawed, and that the brief summary of the law that voters will read on election day fails to effectively explain all that the bill would do.

After an attempt to legalize recreational marijuana in California failed in 2010, both supporters and opponents of legal weed see the state as a key battleground.

While the opposition campaign in the state had only raised $125,000 at that time, at least one national organization has signaled it’s intentions to fight the measure: Smart Approaches to Marijuana (SAM), a group that includes former Rep. Patrick Kennedy (D-R.I.) and former George W. Bush administration official David Frum, has put up $2 million to fight legalization efforts in November.

SAM President Kevin Sabet, a former adviser in the White House’s Office of National Drug Control Policy, told the Los Angeles Times that he expects a lot of the group’s resources will go to the Golden State.

“If there is one thing we agree on with legalization advocates,” Sabet said, “it’s that California is important.”

Early opponents feared Maine’s Question 1 could allow large companies to push out the state’s already established and thriving medical marijuana industry, which has nearly tripled in size since 2011. But the measure would reserve 40 percent of business licenses for small-scale growers.

Polls over the past two years have been close, and the state’s contest may shape up to be the tightest of the five.

The opposition has some big names on their side, including Republican Gov. Charlie Baker and Attorney General Maura Healey and Boston Mayor Marty Walsh, both Democrats.

But the pro-campaign claims support from Democratic Boston City Council President Michelle Wu, who has said “it just seems ridiculous that kids at Harvard can smoke pot and have incredibly successful careers while blacks and Latinos, particularly boys and men, who are using the same substance are sent to jail.”

Not long ago, legalization supporters had the backing of the editorial board of the Las Vegas Review-Journal, the largest paper in the state. But after Sheldon Adelson, a casino magnate and Republican megadonor, purchased the paper late last year, the editorial board published a piece predicting that the new owner would enforce a “complete reversal” on marijuana legalization.

In June, the paper ran an editorial with a simple takeaway: “Voters should ‘just say no’ to legalizing recreational marijuana on Election Day.”

Supporters of the initiative include several state legislators, including Nevada State Sen. Richard Segerblom, a major proponent of the state’s medical marijuana system. (A local dispensary has named a sativa strain “Segerblom Haze” in his honor.)

The state’s most prominent Democrat, Sen. Harry Reid, isn’t so supportive. “If I had to vote on it now, I wouldn’t vote for it,” Reid said Tuesday. “That’s something we need to look at quite a bit longer. I think it’s something that we have to be very careful with.”

Correction: The original version of this story wrongly stated that activists in Michigan were pushing for a referendum on medical use, and not, as is the case, recreational use.