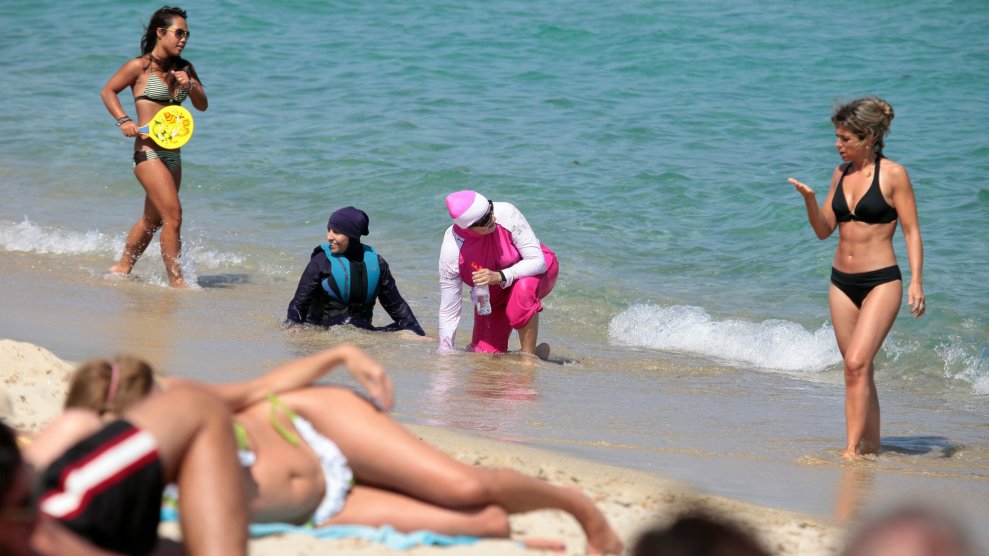 A beach scene in France.Sipa USA/AP

Update: One of France’s highest courts suspended the burkini ban in the town of Villeneuve-Loubet on Thursday, holding that the ban violated civil liberties including freedom of religion and movement. The ruling sets a precedent that could be used to challenge bans in other municipalities.

On Tuesday, an image of French authorities forcing a Muslim woman to disrobe on the beach sparked outrage on social media. It was the second such incident in France that day—earlier, a beachgoer in a head scarf and tunic was fined because her attire was not “an outfit respecting good morals and secularism.”

The response was swift on Twitter, where people noted the double irony that such actions are only helpful to ISIS…

The sad part is, this makes perfect recruitment material for ISIS and other extremists https://t.co/IgHxvmFVPT

… a group that might be apt to do the same thing:

Armed men patrolling beaches forcing women to disrobe into clothing the men find more suitable. Sounds like something ISIS would do #Birkini

At least 15 French cities have banned Muslim beachgoers from wearing “burkinis” in recent weeks, but these are hardly the efforts by French officials to crack down on Muslim customs in the name of fighting terrorism. Since the country’s state of emergency went into effect last November, police have conducted thousands of raids on Muslim homes and establishments and placed hundreds of Muslims on house arrest. The country banned certain head scarves more than a decade ago. (Disturbingly, Muslims comprise more than half of France’s prison population, despite being just 10 percent of the population. Our long-read on why French prisons are churning out terrorists, here.) Here are four others ways France is cracking down on Muslims:

Bans on Muslim attire: In 2004, in the wake of two bombings the previous year and other attacks abroad, France banned public school staff from wearing head scarves that prominently displayed religious insignia. The ban also covered Jewish yarmulkes and Christian coverings that display the cross—the French house speaker said at the time that the ban was a “clear affirmation that schools are a place for learning, not for militant activity or proselytism.” In 2007, the law was expanded to include anyone working in a public service job. Then in 2011, France banned full-face veils—which included the Muslim burqa and niqab—in all public places. It was the first European country to do so.

Expelling imams: At least 40 imams—all of them immigrants—were expelled from France between 2012 and 2015 for “preaching hatred.” About a quarter were sent packing in 2015 alone. In announcing the numbers, French Interior Minister Bernard Cazeneuve declared that any “foreign preacher of hate will be deported.”

Raiding Muslim establishments: Under France’s state of emergency, police were granted new authority to raid private property without a search warrant and place people on house arrest without a court order. Human Rights Watch reported this February that French officials had ordered nearly 3,300 searches and placed more than 350 people on house arrest in less than four months—Muslim residents, homes, mosques, restaurants, and establishments were the primary targets, a human rights violation, the group said.

Shuttering mosques: French officials shut down three mosques with suspected terror ties in the weeks following the Bataclan attack, marking the first time the country had taken such action, according to Al Jazeera. Many of the mosques’ attendees were placed on house arrest or banned from leaving the country. Officials considered closing up to 160 additional mosques, according to one of France’s leading imams.

Back in June, Georgetown University professor Daniel Byman wrote in Slate that anti-Muslim pushback in the wake of terror attacks “makes it harder for European security services to gain the cooperation of local communities and easier for ISIS to gain recruits.” France may indeed, as French prime minister Manuel Valls declared in June, be due for a “revolution in our security culture.” But burkini bans probably aren’t the best place to start.