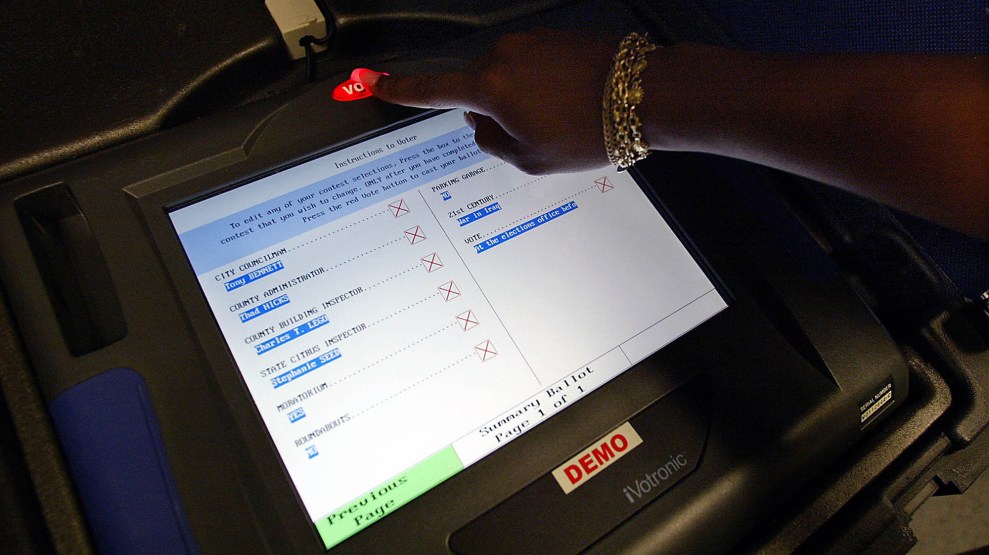 With growing evidence that Russia is meddling in the US presidential election—allegedly by hacking the Democratic National Committee and releasing embarrassing emails—the concern that somebody might try to hack voting machines no longer seems outlandish. And as many as one-fifth of all votes cast in the November election could be particularly vulnerable to interference.

Computer scientists and security experts have warned for years about the vulnerabilities of electronic voting machines. Now the DNC hack has brought those fears to the fore. In the wake of the 2000 election debacle, states turned to electronic machines to avoid a prolonged and contested ballot counting process. But as Wired‘s Brian Barrett noted last week, the move toward electric voting machines turned out to be a “technological train wreck.” In Politico, Ben Wofford lays out an in-depth history of how the United States came to rely on machines that are susceptible to tampering and intrusion. One computer science expert told him that if some of these machines hadn’t been hacked, “it was only because no one tried.”

Where are the most problematic machines? As computer security expert Bruce Schneier pointed out in a recent Washington Post op-ed, the machines that pose the greatest risk are electronic ones that leave no voter-verified paper trail. If someone were to manipulate such a voting machine’s underlying software, there would be no way to prove it by comparing the machine’s vote count to a paper record.

Concerns about the vulnerability of the country’s voting infrastructure are mounting just as Republican nominee Donald Trump has begun talking about how the election might be rigged against him. The absence of a paper trail on millions of ballots in swing states could give Trump plenty of ammunition for his conspiratorial allegations—and make them virtually impossible to disprove.

“You really want to have a baseline of evidence that you can use to demonstrate that the outcome [of an election] was correct,” says Pamela Smith, president of Verified Voting, which pushes for accurate, transparent, and verifiable elections. “The DNC hack takes this idea out of the realm of the theoretical and into the ‘Oh, this could actually happen.'”

Roughly 80 percent of Americans vote on machines that leave a paper trail or vote with paper ballots (either in person or by absentee ballot). But that leaves 20 percent who cast ballots with no paper record. Smith says voters in Delaware, Georgia, Louisiana, New Jersey, and South Carolina all use machines with no paper trail, as do voters in some parts of Texas, Tennessee, Indiana, Kentucky, Virginia, Pennsylvania, Arkansas, Kansas, Mississippi, and Florida. According to Verified Voting’s data, these counties had more than 60 million registered voters as of November 2014.

Here, using data collected by Verified Voting, is a map of the counties where these machines are in use:

The good news, according to Smith, is that many states are moving away from machines with no paper trail. In Virginia, for instance, recent legislation mandates that the state’s suspect machines must be phased out by 2020. She also says officials, fearful of hacked elections, are showing more willingness to engage computer security experts who have found vulnerabilities in the machines. “It is my belief that the election officials in these states are doing their level best with the tools that they have to make sure they’re safeguarding their systems.”

Still, Smith says, “it’s a process” to move toward a paper-backed system. “Things don’t happen overnight, but the trend is absolutely in the right direction.”

The table below shows all the jurisdictions with machines that have no voter-verified paper audit trail: