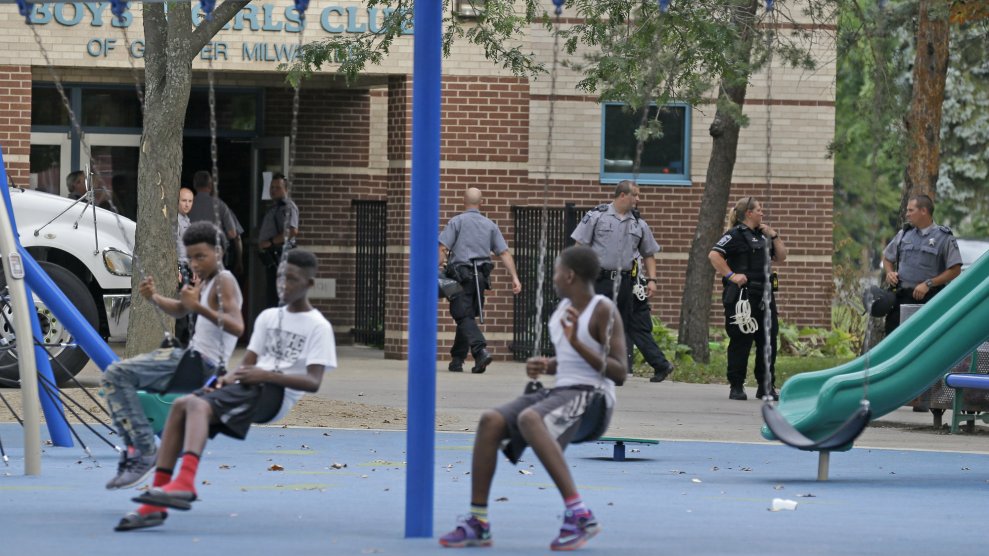 Kids play in a Milwaukee park August 15 as police deal with the aftermath of the previous night's rioting.Jeffrey Phelps/AP

Milwaukee’s mayor imposed a 10 p.m. curfew on Monday and Wisconsin Gov. Scott Walker activated the National Guard in response to weekend rioting sparked by Saturday’s fatal police shooting of an armed black man, 23-year-old Sylville Smith. The unrest, in which protesters torched multiple businesses and police cars and at least one person was shot, was the second wave of major protests since December 2014, when a county prosecutor declined to file charges against police in the fatal shooting of another black man, Dontre Hamilton. But while anger over such police shootings may have set off the mayhem, decades of unemployment, segregated housing, substandard schools, and racist policing set the stage for Milwaukee to blow. Indeed, the city has earned itself a reputation as the worst place to be black in America. Here’s why: 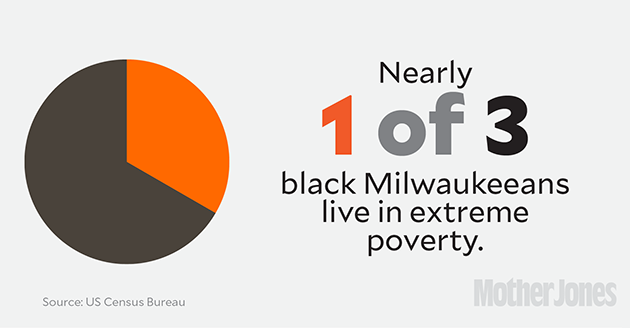 Concentrated poverty: Milwaukee is one of the nation’s most segregated cities, with black residents—40 percent of the population—living almost exclusively on the city’s north side. Milwaukee is also America’s second-poorest major city, in a state that in 2014 had the nation’s highest black unemployment rate. A third of its black residents live in “extreme poverty,” defined as a household with an income less than half that deemed appropriate by the federal government for a family of its size—and 40 percent live below the poverty line. This is partly because the region’s jobs are concentrated in three white suburbs that are all but inaccessible by public transportation. The WOW counties, as these suburbs are known, are at least 94 percent white, and just 1 to 2 percent black.

Failing schools: Milwaukee’s public schools are doing a poor job of educating their students. During the 2013-14 academic year, Milwaukee had the nation’s largest black-white gap in graduation rates, and K-12 test scores were abysmal.

Most black kids in Milwaukee attend highly segregated public schools. According to University of Wisconsin-Madison professor Mark Levine, roughly three out of four attend a high-poverty institution where 90 percent of the students are black. And when those kids misbehave, schools are quick to dole out suspensions. In 2011-12, Wisconsin led the nation in suspending black high schoolers, thanks largely to excessive suspension rates in Milwaukee. (If you want to understand why suspensions are bad, and how children can be disciplined more effectively, read this piece.)

Mass incarceration: Black men in Milwaukee are incarcerated at the highest rate in the nation. In 2013, according to UW researchers, one in eight were locked up, and by the time the men hit their 30s and 40s, more than half had served time. Two-thirds of the incarcerated men came from six of the city’s poorest zip codes, including those for Sherman Park, the neighborhood where the most recent police killing took place. Another of the zip codes (53206) has the highest black male incarceration rate in America—62 percent, according to another UW study. (A documentary on that community is due out later this year.) So many Milwaukeeans have criminal records, one ex-offender told NPR, that police routinely ask the people they pull over whether they’re on probation. Wisconsin spends more on corrections than on higher education. And to top it off, just 10 percent of black men with a criminal record in Wisconsin have a valid driver’s license—which makes it tough to secure jobs and services. (The sheriff of Milwaukee County recently called the Black Lives Matter movement a terrorist organization.)

How it got this bad: Black people moved to Milwaukee in large numbers beginning in the 1960s—later than many blacks who left the South inhabited other Rust Belt cities such as Chicago and Detroit during the Great Migration. White immigrant communities in Milwaukee fiercely resisted integration in housing and schools, and when the city’s manufacturing industry collapsed shortly after blacks arrived, massive racial disparities sprang up in employment, housing, and education. Milwaukee also was hit harder by globalization and by the disappearance of manufacturing jobs than other major urban centers, an analysis by the Milwaukee Journal Sentinel found. Black men suffered a drop in employment during this period that was more than twice what the nation endured during the Great Depression. White residents fled to the suburbs, taking their resources with them, and little has improved since. Decades of tensions between police and the city’s black communities helped fuel this latest flare-up.