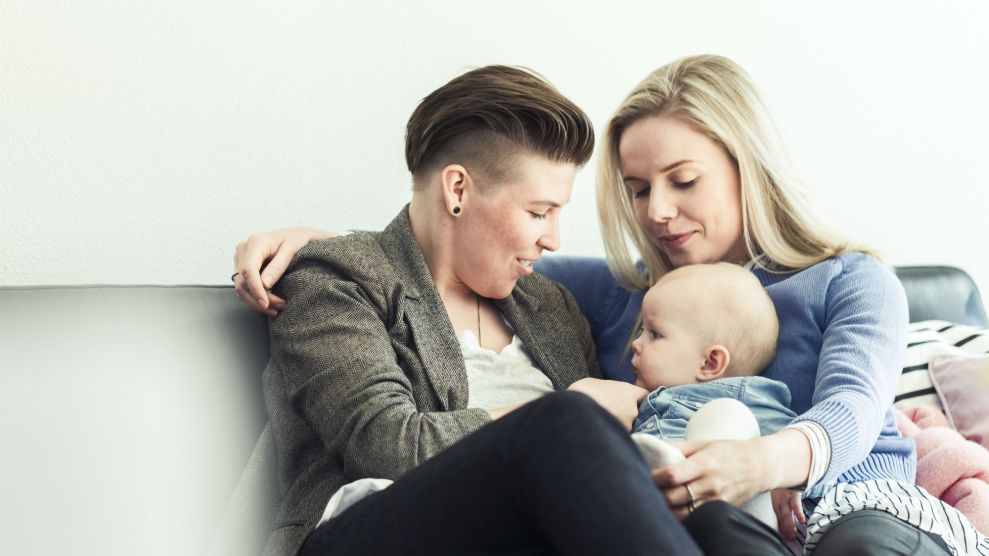 Last week, four lesbian women in New Jersey sued the state after being denied insurance coverage for infertility treatments because they couldn’t prove they had tried to conceive naturally.

A New Jersey law from 2001 requires that insurance companies cover infertility treatment as well as in vitro fertilization and other assisted reproductive technology (ART). But there’s a catch: The patient must prove that her infertility has extended for up to “two years of unprotected sexual intercourse.” Since that law was enacted, though, two important things happened. The Supreme Court made same-sex marriage legal, and Obamacare prohibited insurance policies from discriminating again patients based on their sexual orientation. In the first lawsuit of its kind since marriage equality and the passage of Obamacare, the New Jersey women are arguing that the law discriminates against same-sex couples because they obviously can’t get pregnant through unprotected sex with their partners.

“These women are already going through what can be a difficult experience, and they have the added stress of affording it financially and the added insult of being treated like a second-class citizen,” Grace Cretcher, the plaintiffs’ lawyer, told the New York Times. “The specific wording of the New Jersey mandate is particularly egregious and one of the most specific and exclusionary.”

Despite progress on a national level, the New Jersey couples’ experiences might not be unusual. Only 14 states require that insurance companies have at least one plan that covers infertility treatments, which can include intra-uterine insemination, drug therapies, and IVF. But many of them use language similar to the New Jersey law and define infertility as the inability to become pregnant after a certain period of unprotected sex, as opposed to only a medical diagnosis indicating infertility or sexual orientation that excludes intercourse. Even in states like California where laws have been updated to protect insurance discrimination against LGBT people, not all policies are in compliance, according to Shannon Minter, the legal director of the National Center for Lesbian Rights. As a result, same-sex couples no matter what their medical circumstances may be, are often told they don’t qualify for coverage.

In the 36 states that don’t have laws related to fertility coverage, insurance policies can enforce provisions that effectively exclude same-sex couples. Minter says that even though many of those policies cover infertility treatments, many also require heterosexual sex as evidence. Sometimes, plans will allow patients to prove their infertility through failed artificial insemination, but that’s expensive: One cycle of IVF can cost tens of thousands of dollars, and cheaper methods still range from the hundreds to thousands.

The insurance company involved in the New Jersey case told the New York Times that it covers “infertility services equally, regardless of sexual orientation,” and that it interpreted the law “in a gender- and orientation-neutral manner.” It added that “our coverage standard complies with federal nondiscrimination requirements.”

LGBT rights advocates also say the fact that cases like the one in New Jersey are gaining traction shows some movement toward the ultimate goal: protecting the insurance coverage rights of same-sex couples who want to have biological children regardless of their medical circumstances, because ART is their only option.

“If you have a policy that on its face requires a certain kind of sexual intercourse in order to demonstrate infertility, I would argue that’s discrimination,” Minter says. And because of the barriers to pregnancy that same-sex couples face, assisted reproductive technology is an important option. “It’s a very, very common situation.”