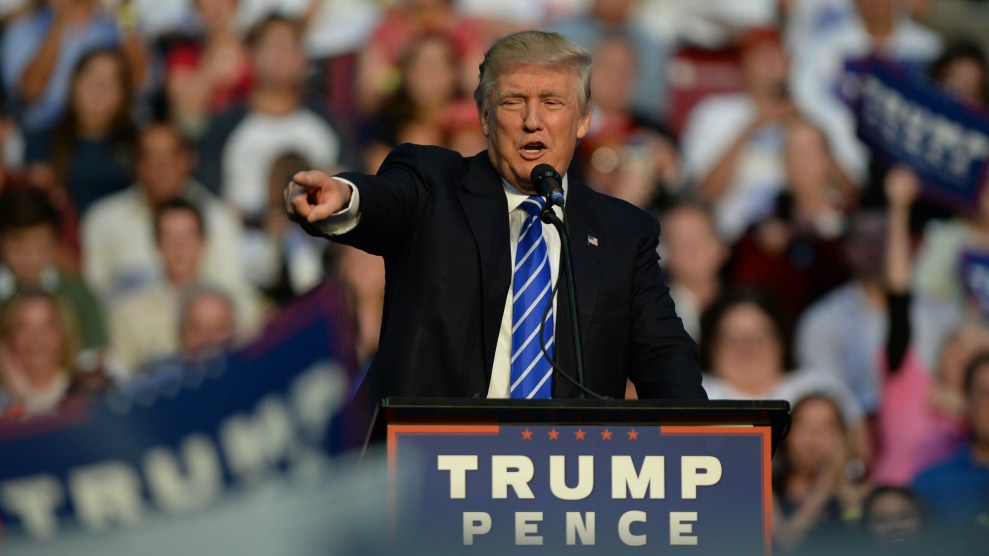 Donald Trump’s efforts to position himself as the leader of a more LGBT-friendly Republican Party could veer off course Thursday afternoon when he meets with a group of conservative evangelical pastors in Orlando, Florida, at a conference hosted by a group that is strongly opposed to gay rights. The meeting comes one day before the two-month anniversary of the Orlando massacre that saw 49 people killed at a gay nightclub in the deadliest mass shooting in American history.

Earlier this week, the Christian Broadcasting Network reported that Trump will discuss his plans to champion conservative religious values at the Rediscovering God in America conference on Thursday. The two-day event, with more than 700 pastors and their spouses in attendance, will be hosted by the Florida division of the American Renewal Project, a group dedicated to mobilizing conservative Christian voters and motivating right-wing pastors to run for political office. Marco Rubio, Trump’s former rival for the Republican Party’s presidential nomination, is also expected to speak at the conference.

Trump and Rubio have both faced criticism for appearing at the event due to the anti-LGBT stance of the conference sponsor. The American Renewal Project receives a significant amount of funding from the American Family Association, a conservative group that has fought against LGBT rights. The American Renewal Project is led by its founder, David Lane, a self-described political operative who has spent more than two decades organizing campaigns and conferences for conservative evangelical pastors in an effort to energize the Christian right.

Right Wing Watch notes that Lane, a popular figure who has advocated ending the separation of church and state and has said the Bible should be the “principle textbook of American education,” has a record of making inflammatory statements about the LGBT community. In 2013, he said “homosexuals praying at the inauguration” of President Barack Obama in 2012 would lead to car bombings across the United States. He has said Republican supporters of LGBT rights are comparable to supporters of slavery before the Civil War and has argued that increased cultural acceptance of LGBT people has led to a “moral crisis” that “has threatened our utter destruction.” He has also called homosexuality a Marxist “psychological conditioning” plot advanced by Hollywood.

“Homosexual totalitarianism is out of the closet, the militants are trying [to] herd Christians there,” Lane told Bloomberg Politics on Tuesday. He said that although Trump currently commands an overwhelming share of the white evangelical vote, the candidate needs to take a more forceful stance supporting religious-freedom legislation.

Trump’s address will be a part of the American Renewal Project’s “Pastors and Pews” series, which brings pastors together to discuss politics. Trump is expected to speak about his plans for repealing the Johnson Amendment, a 1954 tax rule that prevents tax-exempt organizations like churches and schools from endorsing political candidates. The Republican presidential nominee previously discussed his plan to repeal the amendment during a meeting with evangelical pastors in June.

Trump has used the Pulse nightclub shooting in Orlando to argue that he is the best candidate for LGBT people. Shortly after the shooting, Trump tweeted that he “appreciated the congrats for being right on radical Islamic terrorism.” He has since argued that his proposed ban on Muslim immigration would be of particular benefit to the LGBT community and has said he would be the preferred pick if one were to “ask the gays” which presidential candidate was better.