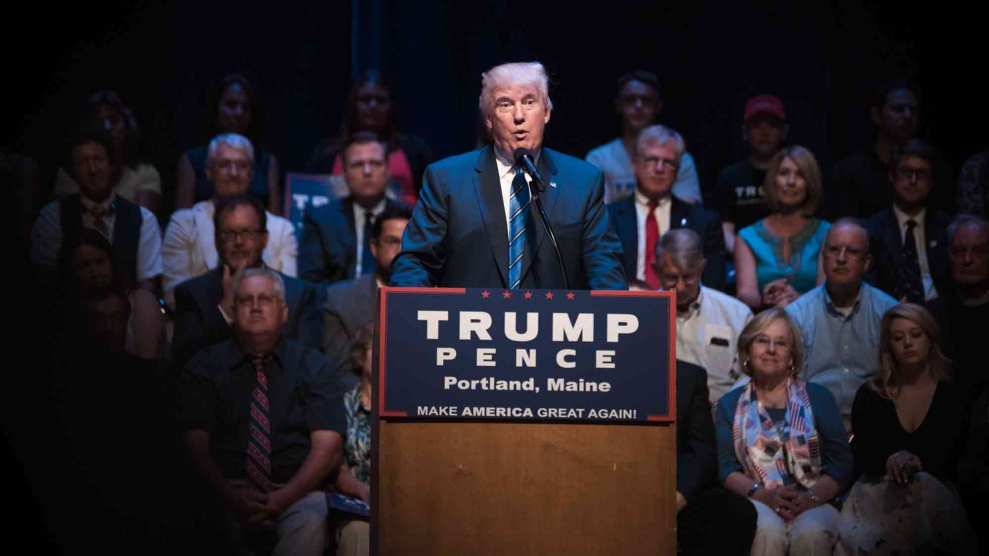 Following a tumultuous week in which Donald Trump’s poll numbers tanked and reports of staff unrest dogged his campaign, the GOP nominee is trying to change the conversation by focusing on his economic vision. On Friday, ahead of a big economic policy speech Trump is expected to deliver next week, the Trump campaign released a list of his economic advisers. The roster of 13 men—all are men and five are named Steven or Stephen—includes a handful of billionaires and financial moguls, several of them longtime Trump friends. Also on Trump’s economic brain trust is an economist, David Malpass, who downplayed concerns about the economy shortly before his firm collapsed and the economy cratered.

Malpass is a former economic adviser to Ronald Reagan whom the Trump campaign touts as having “extensive private sector experience.” That experience includes serving for 15 years as the chief economist for Bear Stearns—the Wall Street firm that was deeply enmeshed in the subprime mortgage market—in the lead-up to the investment bank’s spectacular March 2008 collapse.

The fall of Bear Sterns lit the fuse on the economic crisis. And perhaps more so than its competitors, the 85-year-old investment bank came to exemplify the excesses and short-sighted economics that led to the financial meltdown. If Trump is counting on Malpass for economic advice, he had better hope it’s an improvement on the wisdom the economist dispensed as the financial system hurtled toward a cliff. Nine months before his company fell apart, Malpass wrote a column for the Wall Street Journal titled “Don’t Panic About Credit Markets.” He derided the “hyperventilation over the coming U.S. economic slowdown” and wrote:

The slowdown talk weighing on equities also reflects the Wall Street view that debt, mortgage and takeover businesses have replaced General Motors as the economy’s bellwether. According to the bears: As goes the credit market, so goes the economy. Fortunately, Main Street is not that fickle. Housing and debt markets are not that big a part of the U.S. economy, or of job creation. It’s more likely the economy is sturdy and will grow solidly in coming months, and perhaps years.

So, that was wrong.

Malpass did fine, though. He currently sits on the board of New Mountain Capital, a multi-billion-dollar private investment firm, and runs his own market research firm.

Malpass is not the only person on Trump’s list of economic advisers who played a controversial role during the economic crisis.

In July 2008, several months after Bear Sterns fell apart, the federal government was forced to take over Indy Mac, which was overwhelmed by the bad mortgages it had issued. The government was eager to get rid of the bank’s assets, and Steve Mnuchin, who serves as the Trump campaign’s finance co-chairman and is a member of his economic team, swooped in. Mnuchin, a former Goldman Sachs banker and hedge funder, made much of his current fortune by organizing a new bank, called OneWest, to buy IndyMac’s portfolio of mortgages. Part of the deal was that the federal government and taxpayers would cover any losses if more mortgages went bad, and OneWest would make the profits on anything that didn’t. Mnuchin’s bank would become infamous for its hardball tactics and willingness to foreclose on struggling homeowners.

Perhaps the biggest name on Trump’s economic team is John Paulson, a hedge fund manager whose firm foresaw the subprime mortgage meltdown and made billions betting against the big banks that were heavily invested in mortgage-backed securities. In 2010, Paulson’s fund made more than $5 billion, setting a record. Previously, Paulson was a major donor and fundraiser for Mitt Romney and the super-PAC backing his 2012 presidential run.

The defining characteristic of Trump’s team of economic advisers seems to be that they are friends of the GOP nominee, financial backers of his campaign, or both. That includes Tom Barrack, who has been friends with Trump for decades, ever since negotiating the sale of the Plaza Hotel in New York City to Trump. Barrack is well known in financial circles for getting involved with unorthodox deals—in one case, he arranged oil sales between Saudi princes and Haitian dictator Baby Doc Duvalier, giving the autocrat his watch to help smooth the deal.

It’s unclear how extensively Trump will be relying on the counsel of his brain trust. Last year, when asked whom he consults with on foreign policy matters, Trump remarked that his top adviser was himself.