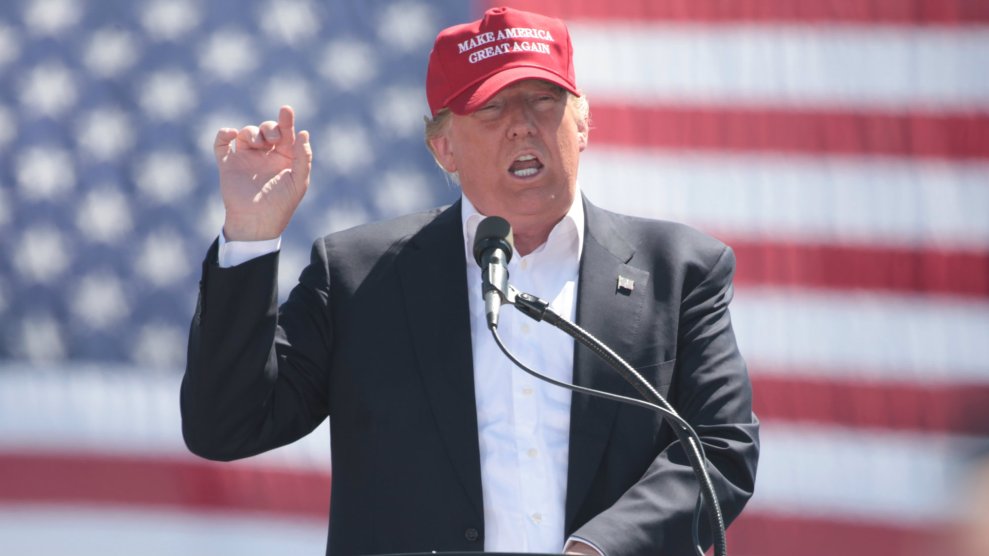 Donald Trump has been routinely criticized for sharing scant details about the policies he hopes to implement as president. But although he’s drawn little attention for it, there is one area where Trump has gotten pretty specific: policing.

In an interview with the Guardian US last October, Trump said he supported federal funding for body camera programs at local police departments. And in a Facebook post following the mass shooting of police officers in Dallas and the shooting deaths of Alton Sterling and Philando Castile at the hands of police, he made appeals to both sides of the debate. He called for the restoration of “law and order” while acknowledging that “the senseless and tragic deaths of two people in Louisiana and Minnesota reminds us how much more needs to be done.” At a rally in Indiana, he pondered whether police officers had shot Sterling and Castile because of poor training.

Still, Trump has called the Black Lives Matter movement “divisive.” And of course there’s the time he threatened to fight members of the movement if they tried to disrupt his rallies. After a Black Lives Matter protester who did just that was assaulted by several Trump supporters last November, the Republican candidate condoned the attack. “Maybe he should have been roughed up,” Trump said. (He has been endorsed by the New England Police Benevolent Association and by conservatives with a range of views on criminal justice reform.)

So what does Trump actually think about the state of policing in America? In fact, he answered in his own words in response to a 33-question survey sent to him by the Fraternal Order of Police earlier this year. The self-proclaimed “law and order” candidate also met with the FOP earlier this month to seek its endorsement. (The FOP also sent the survey to Hillary Clinton, who did not respond.)

Here’s what Trump’s answers to the survey revealed:

Police militarization: Trump said he would repeal President Barack Obama’s executive order banning local police departments from receiving certain kinds of equipment through a federal program that transfers surplus military equipment to local and state police forces. Obama signed the order in May 2015 after public outcry over law enforcement’s aggressive response to protesters in Ferguson, Missouri, in late 2014. (Obama recently said he will review each item on the “controlled equipment list” after law enforcement officials said they needed some of it in the wake of targeted attacks on police officers in Dallas and Baton Rouge.) Trump also said he believes police should receive federal grants with no strings attached. Currently, departments can lose funding if they don’t meet incident reporting requirements or other mandates.

Racial profiling: “Current law and judicial precedent provide a great deal of civil rights protection,” Trump wrote. But he also noted that he would sign anti-racial-profiling legislation like the proposed End Racial Profiling Act “if there is a clear need for edification for certain civil rights that are being violated.” Trump responded to the FOP questionnaire months before the Department of Justice’s damning new report on racist policing in Baltimore. But there were already similarly outrageous DOJ reports on police departments in Cleveland, Ferguson, and Newark, New Jersey, the products of more than a dozen reviews and investigations into local police departments launched by the DOJ under the Obama administration.

Demographic data collection: Trump said he believes police departments “should be aware of the circumstances” of encounters between their officers and the public. If keeping information on the races of people interacting with police “is determined to improve policing,” Trump said, “then that should be part of the protocols officers use.” A major issue raised by police reform advocates in recent years has been the lack of reliable federal data on police shootings and the races of people killed by law enforcement. But the determination of whether to collect such data should be left to department administrators and local elected officials, Trump said.

“Blue lives matter”: Trump said he would push for harsher penalties for crimes against federal law enforcement officers and that he would consider signing bipartisan legislation to make any crime against a police officer a hate crime. (I reported on why that’s a bad idea earlier this year.) But he said he would not sign legislation to label murders or attempted murders a federal offense if the victim is a law enforcement official employed by an agency that receives federal funding. Doing so, Trump said, would effectively make state and local law enforcement agencies—which receive funding from the feds—an extension of the federal government, “which was not intended at the founding” of the nation.

Asked whether he would support legislation to limit the damages a plaintiff could win in compensation for injuries sustained as the result of an arrest after the commission of a felony or violent crime, Trump responded in a fashion more typical of his general lack of specificity. He stated that he would “sign any legislation that is in the best interest of America and Americans.”

The FOP announced that it will vote on which candidate to endorse later this fall.