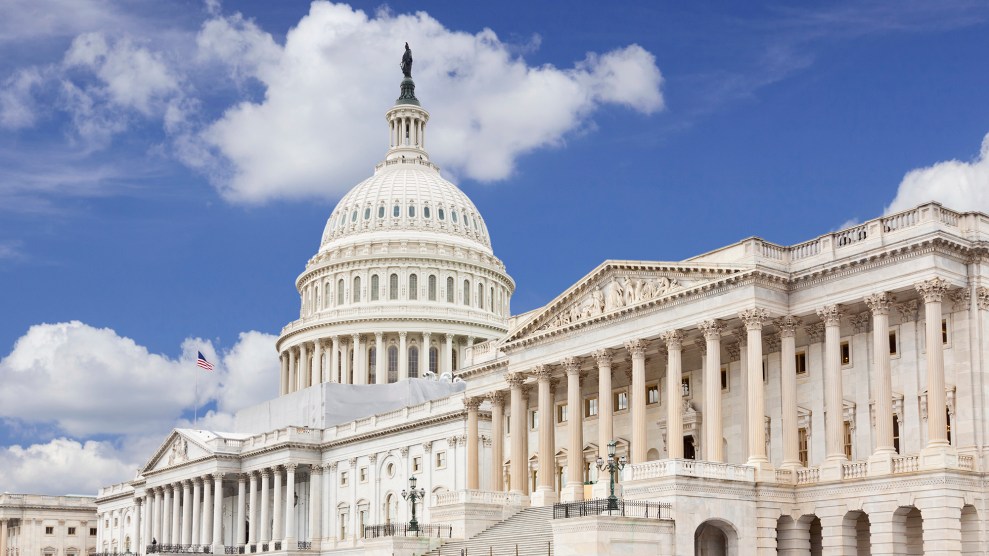 Ever since Donald Trump won the Republican primary, Republicans have fretted about how his unpopularity might hurt other GOP candidates who share the ballot with the bombastic presidential hopeful.

Democrats had high hopes for retaking the Senate even before Trump was seen as a serious candidate. Thanks to the GOP’s success in the 2010 midterms, there are several first-term Republican senators up for reelection in territory that is normally friendly to Democrats. In order to claim a majority in the Senate, Democrats need to flip four seats currently held by Republicans, if Hillary Clinton wins the presidency and Vice President Tim Kaine serves as the tie-breaking vote in an evenly divided Senate. The New York Times‘ Upshot blog gives Democrats a 54 percent chance of gaining a Senate majority.

As the campaign heads into the fall, let’s look at the states where Trump might help drag Senate candidates to their defeat, and the ones where Republicans seem to be doing just fine in spite of Trump.

Wisconsin: The race here is a rematch of the 2010 campaign, when businessman-turned-politician Ron Johnson knocked off Democratic Sen. Russ Feingold. Johnson is now the incumbent, and polls currently project Feingold—known as a champion of campaign finance reform when he last served—to win back his old job. RealClearPolitics‘ polling average has Feingold ahead by 9.7 percentage points, and polls have regularly put the Democrat ahead by double digits, though a recent poll from the usually reliable Marquette University had Feingold ahead by just 3 percent. Feingold was going to be a strong candidate in any year, but Trump’s difficulty winning traction in Wisconsin certainly isn’t doing Johnson any favors.

Illinois: In Wisconsin’s neighbor to the south, Democratic Rep. Tammy Duckworth has consistently posted a lead over incumbent Republican Sen. Mark Kirk. Illinois is almost certain to vote Democratic in the presidential race, so there hasn’t been as much polling there, but Duckworth has generally been ahead. Election guru Larry Sabato just shifted this from a “lean Democratic” to a “likely Democratic” seat. Kirk was going to have a tough time winning reelection in this deep-blue state, but Trump hasn’t helped. Unlike many of his Republican colleagues, Kirk hasn’t been shy about distancing himself from his party’s presidential candidate, but Trump could keep some of Kirk’s base at home by turning off moderate Republicans.

Indiana: Former Sen. Evan Bayh made a late decision to campaign for his old seat, which is open with the impending retirement of Republican Sen. Dan Coats. There’s not much polling here, but a Monmouth University poll from early August had Bayh up 7 points over Rep. Todd Young. Unlike other states that have given Democrats hope, Indiana is solidly red at the presidential level. Maybe Young would do well to take the opposite tack from some of his would-be Senate colleagues and try to campaign on Trump’s coattails.

New Hampshire: Gov. Maggie Hassan is challenging Republican Sen. Kelly Ayotte, who has awkwardly avoided taking a firm stance on Trump. Polls point to a close race, with Hassan slightly ahead—perhaps aided by the fact that Clinton has been easily beating Trump in polls of the Granite State.

Pennsylvania: Sen. Pat Toomey has also tried to distance himself from Trump while still saying he plans to vote for the GOP nominee. Democratic challenger Katie McGinty has been posting modest leads in recent polls, averaging a 0.5-point advantage, per RCP. She isn’t considered a particularly strong candidate, but she seems to be benefiting from Trump’s name at the top of the GOP ticket.

In play if it’s a Clinton landslide:

North Carolina: In this relatively sleepy race, polls are showing incumbent Sen. Richard Burr in a close contest. RCP‘s average has Burr up just 2.5 points against Democrat Deborah Ross. This isn’t entirely Trump’s fault—the state’s Republican governor is struggling in his reelection bid thanks to his anti-LGBT bathroom bill—but the Clinton campaign has been investing in the state and polling close with Trump there.

Missouri: In a normal year, Sen. Roy Blunt probably wouldn’t have to worry about reelection. But he’s averaging just a 4.8-point lead, and one poll put his Democratic opponent within 3 percent of him. Democrats have touted their recruited candidate, Jason Kander, a 35-year-old Afghanistan vet who is currently Missouri’s secretary of state. Missouri was not expected to be a swing state this year, but Clinton isn’t too far behind Trump—just 3 points on average. If Clinton ends up defeating Trump in a rout, this Senate race could get a lot closer.

Ohio: Trump’s not doing so well in this bellwether presidential state—Clinton’s been up by a relatively consistent, if small, margin—but the state’s Republican US senator doesn’t seem to be in any trouble. Rob Portman averages a 7.5-point lead, and that’s not thanks to superior name recognition early in the race, since he’s facing off against a former governor, Democrat Ted Strickland.

Iowa: Chuck Grassley has been a senator since 1981, and the Year of Trump doesn’t seem poised to change that, even if Clinton ekes out a win in Iowa. He’s facing a reasonably strong challenger in former Lt. Governor Patty Judge, but Grassley’s averaging a 7.7-point edge.

Florida: After spending the first half of the year vowing that he’d retire from the Senate, Marco Rubio changed his mind and is currently on track to keep his seat. He’s struggled to find a way to talk about his former primary opponent Trump, but Florida voters don’t seem to mind. Rubio is averaging a 5.7-point margin over his Democratic opponent, Rep. Patrick Murphy. But unlike in Ohio or Iowa, the Democratic candidate is relatively unknown statewide, so there’s still plenty of time for the race to tighten as Murphy introduces himself to parts of the state outside his district—and, in all likelihood, tries to tie Rubio to Trump.