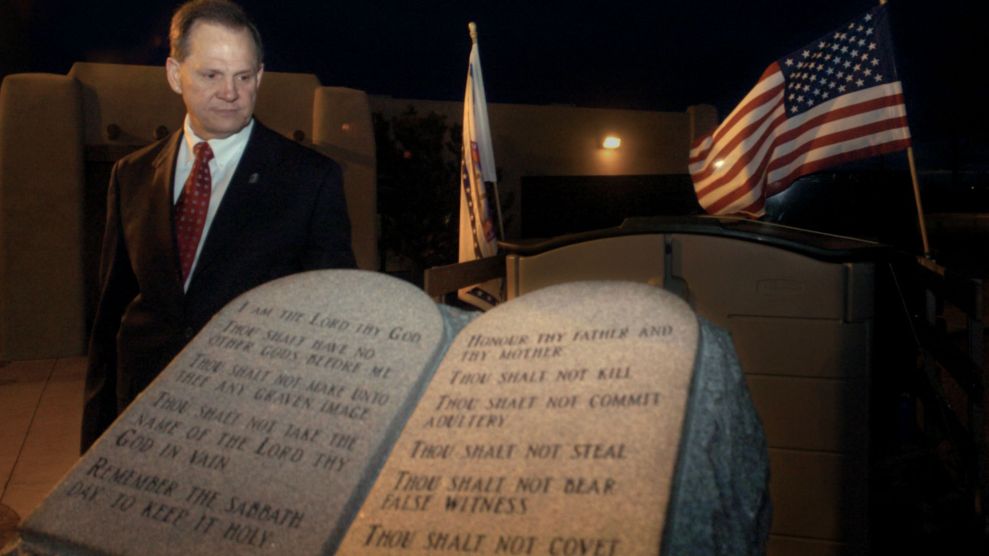 Update, Sept. 30, 1:30 p.m. EST: Alabama’s Court of the Judiciary ruled Friday that Chief Justice Roy Moore will be suspended from the bench without pay for the rest of the term because he failed to comply with law that legally validated same-sex marriage. Moore was also found guilty of failing to uphold the integrity of the court and “perform the duties of his office impartially.”

“When his term expires, he will be ineligible to run for election as judge again because of his age,” said Mat Staver, Moore’s attorney, in a statement. “So the suspension until the end of his term is a de facto removal from the bench.”

Alabama Chief Justice Roy Moore went to court Wednesday morning in Montgomery. But this time he was a defendant, charged with possible ethical violations for defying higher-court rulings with his anti-gay-marriage stance.

In January 2015, after a district court judge ruled that same-sex marriage was legal in Alabama, Moore sent a letter to Gov. Robert Bentley adamantly expressing his belief that the ruling was destructive, and urging the governor to defy the district court ruling and support judges who did not wish to comply.

“The Supreme Court of Alabama has likewise described marriage as ‘a divine institution,’ imposing upon parties ‘higher moral and religious obligations than those imposed by any mere human institution or government,'” he wrote. “The laws of this state have always recognized the Biblical admonition stated by our Lord.”

Moore went further and used his position as chief justice to instruct Alabama probate judges to refuse to issue licenses to same-sex couples via email. “No probate judge shall issue or recognize a marriage license that is inconsistent with Article 1, Section 36.03, of the Alabama Constitution or…30-1-19, Ala. Code 1975,” he wrote.

Moore’s actions led to a complaint filed by the Southern Poverty Law Center, which alerted the state-run Alabama Judicial Inquiry Commission, which in turn launched an investigation. The commission suspended Moore in May. He is now facing six counts of judicial ethics violations.

Moore’s attorney for the proceedings is Mat Staver from the Liberty Counsel, which has been partly funded by one of the conservative billionaire Wilks brothers. He also represented Kim Davis, the Kentucky court clerk who refused to issue marriage licenses to same-sex couples. The Liberty Counsel takes on so-called “religious liberty” cases, and the law firm offered its services in the North Carolina fight over restricting the access of transgender people to public restrooms. Staver also represents Sandra Merritt, who assisted David Daleiden in producing his heavily edited videos that purport to show Planned Parenthood officials involved in the sale of fetal tissue for profit. (There has been no evidence that Planned Parenthood is guilty of any wrongdoing.)* I

At the trial, Staver argued that Moore’s email to the probate judges wasn’t an order, but rather a “status update” on the conflict between the federal court ruling and state court rulings.

This is not the first time Moore has dug his heels in over an issue he perceived to be in direct conflict with his faith. In 2003, he was suspended from the bench for installing a monument of the Ten Commandments in the Alabama Supreme Court building without informing the eight associate justices and then, when faced with an order from a federal judge, refused to remove the monument. Moore’s fellow justices ultimately had the 2.6-ton monument removed in August 2003.

A decision in the trial is expected within 10 days. If Moore is found guilty, he could face censure or suspension without pay. The most severe outcome would be removal from the bench, which would require a unanimous vote from the nine members of the Court of Judiciary.

Correction: An earlier version of this article incorrectly identified a client of Mat Staver.