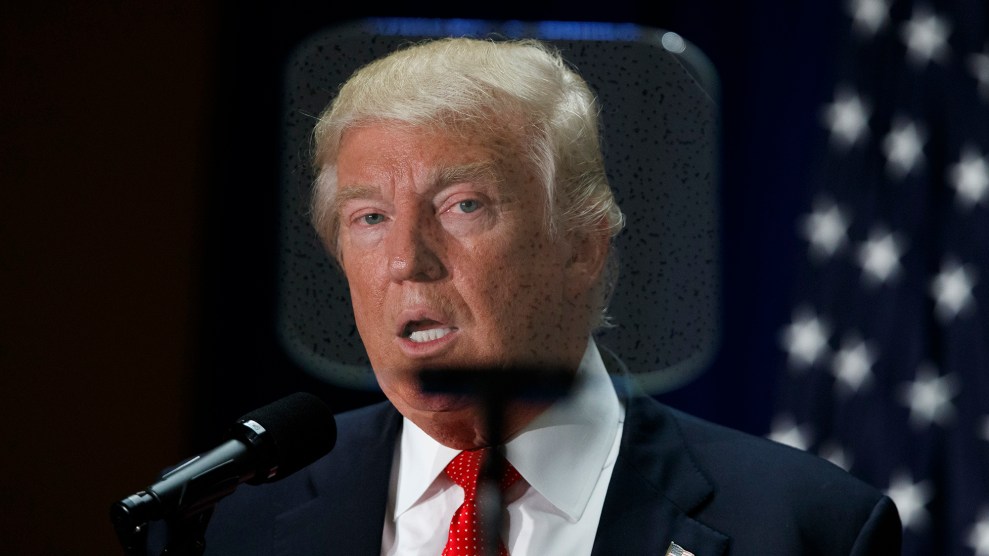 The alt-right movement, reveling in the spotlight cast upon it by the Donald Trump campaign, made its debut to the mainstream media on Friday with a press conference to lay out its goal of an all-white society and its love for Trump.

The once-fringe movement has suddenly found a prominent place in the Trump campaign and among its most loyal backers. Stephen Bannon, the Trump campaign CEO, was until recently the head of the conservative website Breitbart News, which he called “the platform for the alt-right.” But the movement’s moment in the limelight got off to a rough start.

Originally set to be held at the National Press Club, Friday’s event was canceled earlier in the week when the venue scuttled it amid security concerns. Not to be deterred, the alt-right leaders came up with a new plan: a secret location.

Reporters covering the event were instructed to go to the entrance of the Old Ebbitt Grill, near the White House. There, they would encounter a man in a charcoal suit and brown tie who would reveal the new location of the conference. Shortly after 1 p.m., I approached the restaurant and saw the man in the gray suit standing outside. He instructed me to round the corner to the Willard Hotel and make my way downstairs to the Peacock Lounge. Soon after I arrived, Richard Spencer, the man who coined the term “alt-right,” kicked off the event.

“I’m sorry we had to put you through this wild goose chase,” said Spencer, who runs a white nationalist group called the National Policy Institute. Spencer noted that the National Press Club has previously held three NPI events. “We are, from what we can tell, the first guest that have been censored for what is clearly ideological reasons.”

Spencer invited two prominent members of the movement to join him. One was Peter Brimelow, the founder of the website VDARE.com, which the Southern Poverty Law Center describes as an “immigrant-bashing hate site that regularly publishes works by white supremacists, anti-Semites, and others on the radical right.” (Brimelow freely admitted during the event that he publishes white nationalists.) The other was Jared Taylor, a self-described “race realist” who explained why the white race is superior to all others (except for East Asians, he said, who are superior to whites). The audience was a mix of reporters and what appeared to be alt-right members and fans.

Spencer had fashioned a logo for the occasion, consisting of a golden triangular letter A followed by an R made of two stacked triangles. He said it had a young, futuristic look, in contrast to the flags and eagles that adorn the logos of the past. So what did these futuristic triangles represent? Spencer proposed the following “mantra” for his movement: “Race is real, race matters, and race is the foundation of identity.” The ultimate ideal is that the world be divided into ethno-states so that white people could have a “homeland.”

Spencer’s ideas about race are intertwined with his support for Trump. Spencer explained that he likes Trump’s immigration policy, which not only calls for mass deportation of undocumented immigrants but also reduces legal immigration into the country. (Spencer’s ideal policy would also favor immigrants from Europe.) But as Spencer put it, it’s Trump’s more intangible qualities that make him a hero of the alt-right. To Spencer, Trump’s brash style suggests a white savoir, unwilling to be bullied by the politically correct crowd.

For this description, Spencer was greeted with much applause by his fans in the room. He elaborated that rather than a multicultural America, his ideal is a white empire. He described his “dream…ethno-state” as “a homeland for all Europeans,” which would take an “imperial form.”

What would this utopia look like? Spencer said it’s too far off to get into specifics. But he and Taylor, whose role at Friday’s event was to give academic assurances that the races of the world are not equal, disagreed on whether Jews would be welcomed into the white utopia homeland. Spencer took the position that they were not “European” and therefore would take their place in their own ethno-state. Taylor countered, “I don’t think that if a Jewish person identifies with the West and with Europe than that’s something that we should deny.” As Spencer acknowledged, the alt-right has yet to sort out these mere details.

But Spencer did offer up a vision of an alt-right society. “If the alt-right were in power, we would all have arrived here via magnetic levitation trains,” he said. “We would have passed by great forests and beautiful images of blond women in a wheat field with their hands, running them through the wheat.” The audience tittered. “It would be a wonderful sight.”

Correction: An earlier version of this article contained a transcription error.